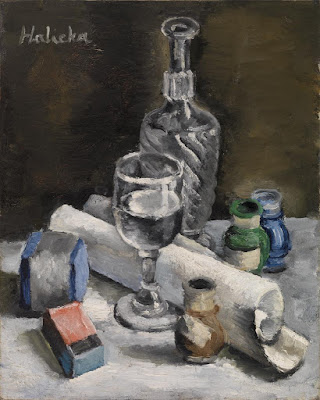 She signed her painting prominently in an upper corner, a la Gauguin.  The colors - black, brown, red, blue, green, and white - could be used to produce bright effects, but that was not Alice Halicka's aim.
Here all is subtle, the arrangement a satisfying blend of formal items and the paraphernalia of an everyday tabletop.  A glass decanter an a wine glass flank a sheet of foolscap, paper used to commemorate important occasions. In turn, these are flanked by small ceramic pots and two boxes (the red and blue one looks as if may contain matches).

What attracted Albert Barnes to this subtle modernist picture?  My guess is that Halicka's color palette may have reminded him of  the one Cezanne used to paint Bathers At Rest, a Barnes favorite.  Such considerations were uppermost in his mind when he created  his "ensembles," unconventional arrangements of paintings and decorative  and utilitarian objects from many cultures.  And creative is not too strong a word for what he achieved through his demonstrations of the formal properties of the works thus displayed.


Alice Halicka was born in Krakow in 1894 and died in Paris in 1975. Her parents were Jewish; her father was a doctor. During her childhood Alice lived in Switzerland and Austria, as well as in Poland. She studied art at a private school for women in Krakow, directed by Maria Niedzielska.  At eighteen Halicka moved to Paris where she studied under Paul Serusier and Maurice Denis at the independent Academie Ranson, then run by its founder's widow,Marie-France Ranson. One advantage the Academie offered its female students was the opportunity to paint from live models.

In 1913 Halicka marred cubist artist Louis Marcoussis who was also Polish. Guillaume Apollinaire singled out Halicka's cubist works at an exhibition in 1914. A few years later Marcoussis advised her to give up painting, saying one cubist was enough in the family. Through the intercession of Raoul Dufy, Halicka  was hired by the Bianchini silk manufactury in Lyon. Halicka gave birth to a daughter, Madeleine, in 1922.  During the decade she illustrated children's books, Valery Larbuad's  Enfantines  and Israel Zangwoll's Les Enfants du Ghetto.

In addition to oil painting, Halicka created collages, watercolors, engravings, and stage sets for the  ballet (Stravinsky's Le Baiser de la Fee in 1937 was performed at the Metropolitan Opera). She even  executed decorative screens for Helena Rubenstein - New York in 1935.  Throughout her life, Halicka traveled widely and even lived for awhile in Benares, India. Marcoussis died in 1941. Halicka's autobiography Souvenirs was published in 1946.