Music Under the Radar: Michel Petrucciani 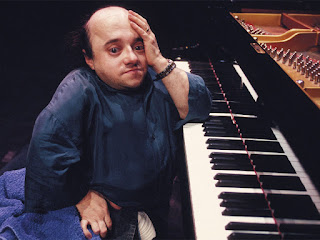 “There's a lot of people walking around, full-grown and so-called normal – they have everything that they were born with at the right leg length, the right arm length and stuff like that.  They're symmetrical in every way. But they live their lives like they are armless, legless, brainless, and they live their life with blame.  I never heard Michel complain about anything.  Michel didn't look in the mirror and complain about what he saw.  Michel was a great musician – a great musician – and great, ultimately, because he was a great human being, and he was a great human being because he had the ability to feel and to give to others of that feeling, and he gave to others through his music.  Anything else you can say about him is a formality.  It's a technicality and it doesn't mean anything to me.” – Wayne Shorter speaking to writer David Hadju (excerpted from Heroes And Villains, Cambridge, MA, Da Capo Press: 2009.)


How he makes it new.  He begins by breaking down chords into their individual notes, reiterating each note several times like a tolling bell,  relishing the moment. as we try to put the notes together in our heads.  Then the melody arrives, dropped down from where a singer or a brass player might key it, giving the listener  a sense of joy that feels almost weird.  The tune was  Afro Blue.   Michel Petrucciani (born Orage, France, December 1962 - died New York City, January 1999) was seventeen when he recorded Date With Time.

What sets the piano apart from other instruments in jazz is that pitch on a keyboard cannot be bent or smeared as it can on brass.  Pianists make up for this in a variety of ways.   Syncopated rhythms will accentuate the weak beats,  the left hand plays two strong beats – a note and a chord – while the right hand plays a melody accented between the beats.  This was dubbed early on as ragtime for these “ragged” rhythms. 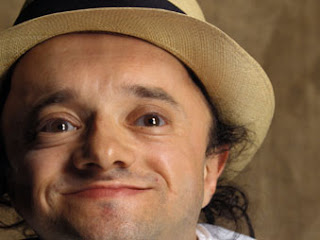 Petrucciani was born with the Osteogenesis imperfecta, a condition commonly referred to as “glass bones.”    He acknowledged being in some pain at all times but said that it was unimportant.   He was uncomfortable with the awards showered on him for his virtuosity, seeing in them pity for his condition.  Applause was problematic too; although he appreciated it, it interfered with getting more music out there.   “That’s why I play 45 minutes non-stop….I prefer laughter to applause.”   One such performance that was recorded (Au Theatre des Champs-Elysses,1997) began with another of his favorites, Herbie Hancock's Maiden Voyage.

“You know sometimes when I play a concert… and I have that right timing… those notes make me feel warm and good… it’s like lovemaking, it’s like having an orgasm.
“It might lead me to death… meaning that I’d be on my deathbed saying, too bad I can’t live another year, I would have been much better.”  - MP


It was after hearing some Duke Ellington records, Petrucciani decided to study piano. When he was fifteen he played in a trio with touring Americans, trumpeter Clark Terry and drummer Kenny Clarke.  He went on to record Ellington compositions like Caravan.  One my favorites is his version of Take the A Train wrapped front and back with his own delicious tune She Did it Again.
His playing has been compared to Bill Evans (“the salt of the earth to me”) for his lyricism and to Oscar Peterson for  his virtuosity.  But the 1980s were a strange time in jazz, critics were feeling sour and Petrucciani's joie de vivre did not suit their mood.

“When I play, I play with my heart and my head and my spirit… I don’t play to people’s heads, but to their hearts.”
“…the pitfall is that when I make a mistake it sounds absolutely outrageous, really horrible because everything else is so clear!” - MP 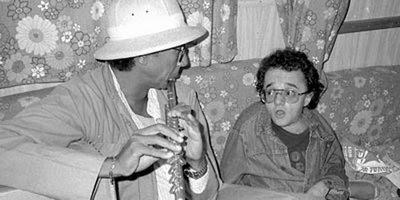 When the eighteen year-old Petrucciani showed up at his door, Charles Lloyd was playing his horn to the trees of  Big Sur and practicing transcendental meditation.   Lloyd looked back later and marveled: “It doesn't seem possible to have all that wisdom, maturity and coloring together at his age.”  But it was.  Rejuvenated,  Lloyd formed a new quartet so the two could work together.   Montreux '82 (Blue Note) was recorded live in Switzerland and released under Lloyd's  name.   The next year Peturcciani gave a solo recital at Carnegie Hall and the American jazz critics, basically an all-male East Coast cabal (even today,) were forced to take note.  When he turned twenty-one, Petrucciani became the first French musician to be signed to the prestigious Blue Note label.   In retrospect the live recording Power Of Three (1986) where Petrucciani is joined by Wayne Shorter on saxophone and Jim Hall on guitar was one of the best of the decade.  Just listen to Bimini, a calypso written by the unlikely duo of Jim Hall and the multi-terrestrial Sun Ra.


“I’m a brat.  My philosophy is to have a really good time and never let anything stop me from doing what I want to do. It’s like driving a car, waiting for an accident. That’s no way to drive a car. If you have an accident, you have an accident—c’est la vie.” – MP
As he toured at an infernal pace, it would be easier to name musicians Petrucciani didn't play with than those he did.   All his friends urged him to slow down but that was no part of his plan 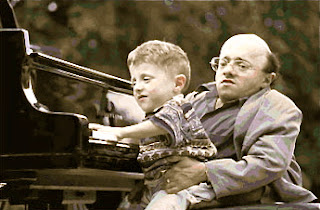 New York is my energy," Petrucciani once told an interviewer.   He died there days after celebrating his thirty-sixth birthday there on January 6 of a pulmonary infection.  He is buried at Pere Lachaise Cemetery in Paris, one grave away from another pianist - Frederic Chopin.   On New Year’s Day 2000, during my first solo broadcast radio hour, I played Petrucciani’s Chloe Meets Gershwin.