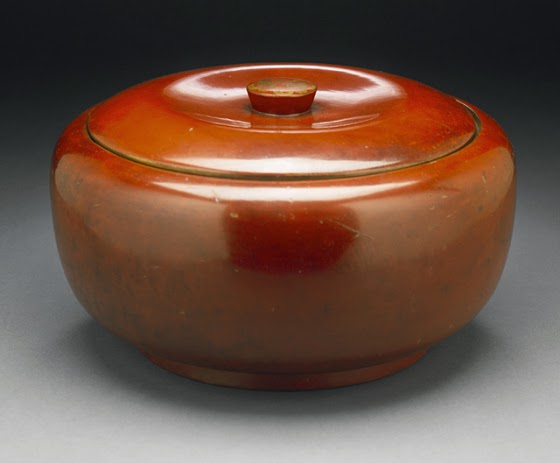 Rice is Life, Syracuse artist Mary Giehl's installation is a visual cartography of world hunger. Giehl molded a series of white bowls out of water and rice, a nod to the making  of Japanese mochi or rice cakes.  She threaded them to red silk and suspended them to form the outlines of a map of the world that illustrates the places where hunger is greatest.  The rain is red, I think, because food is both sustenance and joy, the color of life's blood and the color of celebration is several Asian cultures. The white bowls float above the heads of the viewer like cloud formations from which the rains come, a floating world of rice.  and the red threads make emphatic representations of rain as depicted in 19th century Ukiyo-e (floating world) prints from Japan.

Why rice?  Because rice is the principal source of nutrition for half of the human race.   Over one billion people have as their occupation, the growing of rice.  Terms like labor intensive and back-breaking could have been invented to describe the effort it takes to grow rice. And yet, rice also symbolizes progress:  once it was  a luxury food for the lucky few.  When farmers discovered that rice, previously cultivated on dry land  in the valleys of Central Asia grows even faster in water, poking itself above the water line for the right amount of oxygen, it was momentous.   Paddy turns out to be a word that originates in Malaysian to describe the characteristic irrigated rice terrace.
Thai, Malay, and Burmses myths agree on the delicate nature of rice. Places where rice is grown are organized on rice time. Rice has its own cycles, sowing, planting, growing, maturity, harvest. Rice creates itw own architecture, too, of square paddies, irrigation paths, gates, and the optimum placement of houses.  In rice we see the early imagining of environmentalism, and the deliberate creation of a kind of beauty.
In Buddhism the world is divided into ten parts: Buddha is the first part and rice is the second,  The Japanese have an old saying, that rice is the most sacred thing on earth after the emperor.  Daikoku, a Japanese god of happiness, is always pictured with rice.   The Buddha's father was named Suddhodanta, meaning  'Pure Rice' and in Shinto, there is also a god of rice, Inari.  Sake is wine made from rice and historians think that women were first to turn rice into alcohol.

Shibata Zeshin (1807-1891) the Japanese artist was  a modern alchemist who painted with lacquer. And he was an ardent painter of rice.  Zeshin revived  seikai-ha, which he used for wave forms, an old technique that was so difficult it had not been used for more than one hundred years.  In his search for a supple medium, Zeshin invented his own technique of lacquer painting that he called urushi-e, using specially treated paper and new recipes for the lacquer.  To this end, he mixed lacquer with bronze to simulate iron.  He also experimented until he found a mixture of lacquer and rice starch to approximate the appearance of oil paints.  Even today, Zeshin technical acumen has not been equaled.  Lacquer has often been used for works beautiful and gaudy at the same time, whereas Zeshin used it to create delicate images of bell-crickets, violets, and the white sand raked around cedars; traditional elements of Japanese landscape executed in a modern medium.
The importance of absence as a means to appreciate that which is present has been called by many names but it is a strong presence in Japanese aesthetics.  Yasunari Kawabata, the first Japanese writer to win the Nobel Prize for Literature, said that his writing was motivated by the search for harmony between humans, nature, and emptiness.
Kenji Ekuan is his book The Aesthetics of the Japanese Lunchbox ( Cambridge, MIT Press: 2000) makes connections between the humble bento box and modern design.  Makuouchi bento or intermission lunch originated as portable snacks for theater-goers.  Its aesthetic is based on  the enjoyment of order, with its piquant unification of disparate elements.  Beauty intentionally  concocted from the materials that stimulate human greed requires its own creative etiquette. The makeshift intermission lunch is centered around round rice balls.  The shokudo, or rice paddy lunchbox it the Chinese version, divided into four equal squares for four rice paddies at the different seasons of the year.
There is also a very modern element of waste avoidance to the Japanese aesthetic, likely rooted in the narrow confines of the archipelago of Japanese islands whose traditional name was Flower Chain Islands.  Within the confines of the bento box a seemingly infinite variety of color, texture, fragrance, and flavor are arrayed   All this beauty was created from an environment that was unfavorable in some respects, as is life for most people. 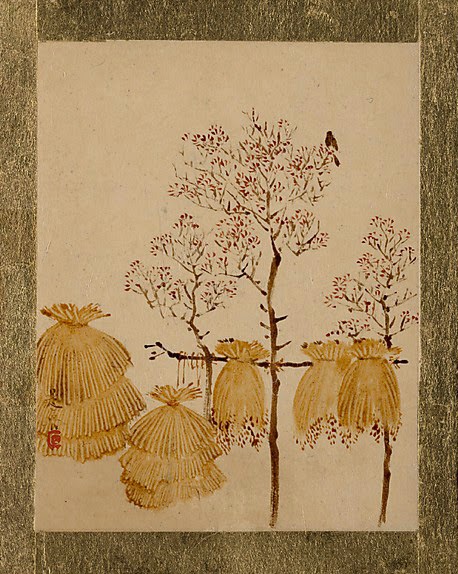 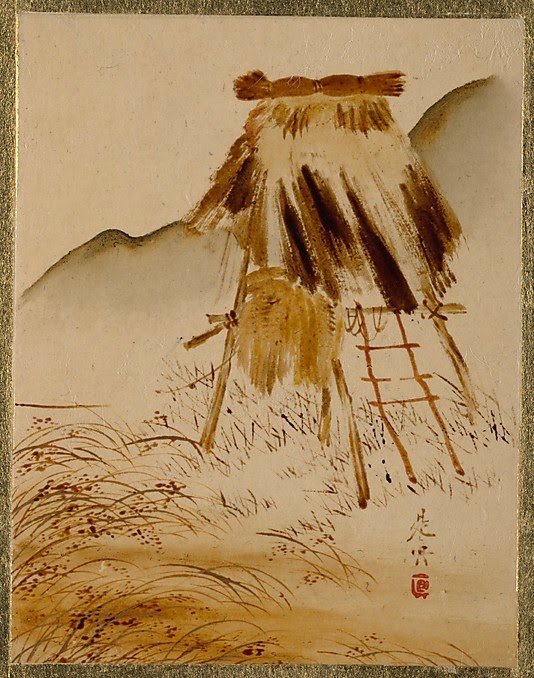 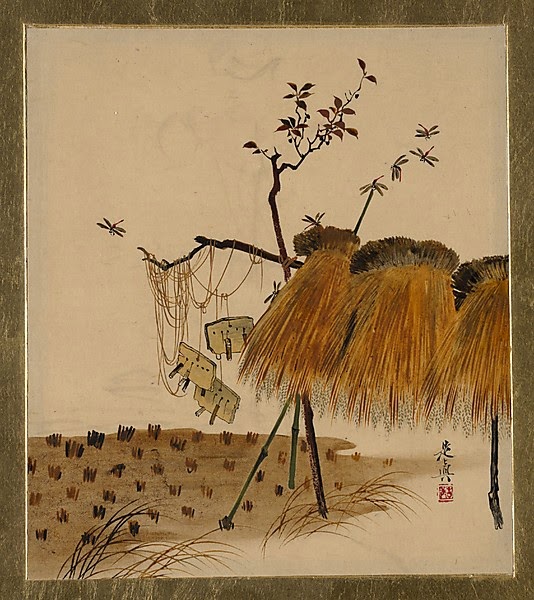 Tania, merci. It is one of the loveliest and simplest rice containers I have ever seen. It is perfect.

Oh, I don't know how I missed this post. Wonderful! Your words bring back happy memories involving rice and my old beat-up bento box, which unfortunately got lost in the mail when I mailed things back from Japan upon my return home.

Rouchswalwe, on the final day of the exhibition here, the public is invited to bring canned goods for the Food Bank. In exchange, each one will get to take a rice bowl home with them. Sorry about your lost bento box. Gary Burton, the vibraphonist wrote and recorded atune called "Bento Box" in the 1990s!