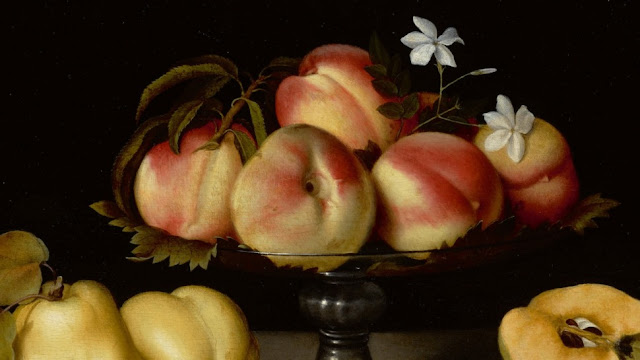 "It is a small panel..
Image:,
Fede Galizia - A glass compote with peaches, jasmine flowers, quinces, and a grasshopper, 12 x 17 in., private collection, U.S., courtesy of Sotheby's, NYC.
Posted by Jane Librizzi at 10:53 AM

I don't even find her name in my two books about still life, which would have appeared only in the XVIIth century in Holland ! Merci, Jane.

Tania, doesn't it make you wonder what else is out there waiting to be discovered? The Hilma af Klint exhibition at the Guggenheim Museum in New York is a revelation and she has only been dead since 1944.

Despite this gorgeous painting, and others, I have rarely seen the name Fede Galizia. Even my complete art dictionary doesn't refer to her. Yet I would have thought her Judith with the Head of Holofernes, alone, was enough to put this artist on the 1590s map.

Thank you, and thanks to Flavio Caroli.

Hello, Hels. Makes you wonder who else has been "erased" from history. Even Grove Art Dictionary has lacunae. If I were writing one, I wouldn't dare call it complete.