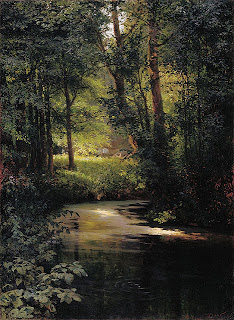 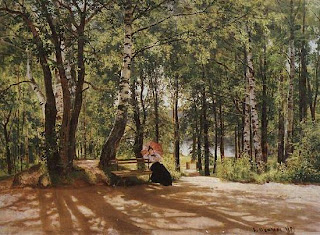 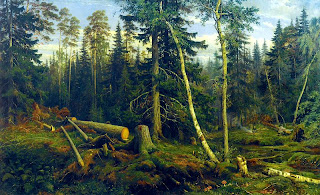 Images:
1. Grigoriy Myasoyedov- Forest Creek. Spring, 1890, courtesy of Wikipedia.
Myasoyedov
2. Ivan Shishkin  - Near the Dacha, 1894, Tatarstan State Museum of Fine Art, Kazan.
Shishkin (1832-1898) was a Russian painter who studied in St. Petersburg and also abroad in Switzerland and Germany.  He belonged to a group called The Itinerants and was a painter, in oils and watercolors, of the forests of his native country.
3. Ivan Shishkin - Lumbering, 1867, Tretyakov Gallery, Moscow.
Posted by Jane Librizzi at 7:39 AM

frightning, such a foresight !

Gerrie, I was so struck by this that I wondered how I had missed it before when we studied "Uncle Vanya" in college. Prescient is a good term, I think.