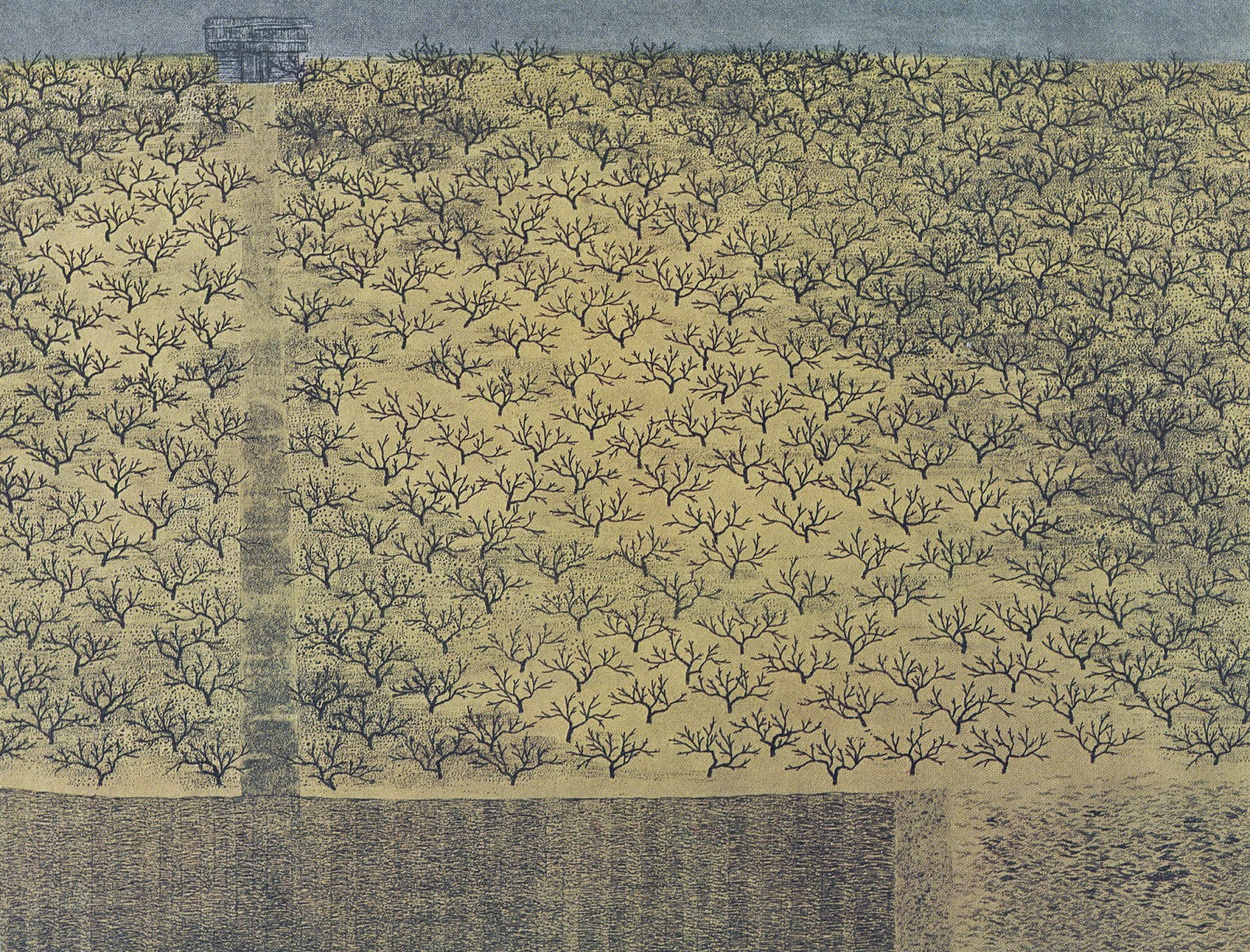 A certain kind of person experiences life through literature.  Ryonosuke Akutagawa (1892-1927) was one of those and in his stories reading is often used as a plot device.

“From Anatole France he shifted to the 18th century philosophers.  But he avoided Rousseau. One side of his nature, - a side easily swayed by passion, was perhaps already too near Rousseau.  The other, - the side endowed with icy intellect brought him nearer the author of Candide.


Twenty-nine years of human existence had offered him little illumination. But Voltaire at least equipped him with artificial wings.


Unfolding these man-made wings, easily he glided up into the sky.  Bathed with reasons light, human joy and sorrow sank away beneath his eyes.  Over squalid towns letting irony and mockery fall, he soared into unobstructed space, heading straight for the sun.  That with just such man-made wings, scorched by the sun's radiance an ancient Greek had hurtled into the sea, dead.  He'd seemed to have forgotten. …..”
-          excerpted from A Fool's Life by Akutagawa Ryunosuke, translated from the Japanese by Will Petersen, with etchings by Tanaka Ryohei, A Mushinsha Book, Grossman Publishers, New York : 1970.


Although he was one of the first - and most influential - Japanese modernists, Akutagawa's work did not become widely available during his lifetime. The writer died by his own hand at the end of the Taisho Era and the beginning of  the Showa Era.  In Japan, historical eras are defined by the reign of each emperor.  Akutagawa lived his adult life during a period of liberal democracy, in Japanese terms, and in his psyche, as in his culture, Japanese tradition vied with Western ideas in a personal experience of  the broader social conflict.
His stories are filled with references to Western literature and philosophy.  The young man who brooded over the meanings in Kant's books, wrote stories like no other contemporary would have thought to write. In The Handkerchief (included in Mandarins) a man studies Ocsar Wilde's De Produnis and August Strindberg's Dramaturgy by the light of a Gifu lantern.  That he is a Japanese professor who admires Western modernism  and is married to an American woman who admires old Japan makes a nice little irony. Strindberg is invoked again in Confessions of a Fool when Akutagawa has his character reflect that Strindberg's  "lies were hardly different from those he himself was writing."  His characters, tormented by the heady stews of their inner lives, may require reflection from contemporary readers, accustomed as we to the world at our fingertips.
Akutagawa included numerous allusions in his stories to the classical literature's of East and West. When he graduated from Tokyo Imperial University in 1916, he had a thesis on William Morris to his credit, and he would later  translate poems of William Butler Yeats.   An early story, from 1916, is The Nose, his protagonist  a Buddhist holy man. in which Akutagawa draws on the character of Cyrano de Bergerac  While working as a journalist in the early 1920s, Akutagawa  traveled to  Russia and China as a correspondent for the newspaper Oaska Mainichi. 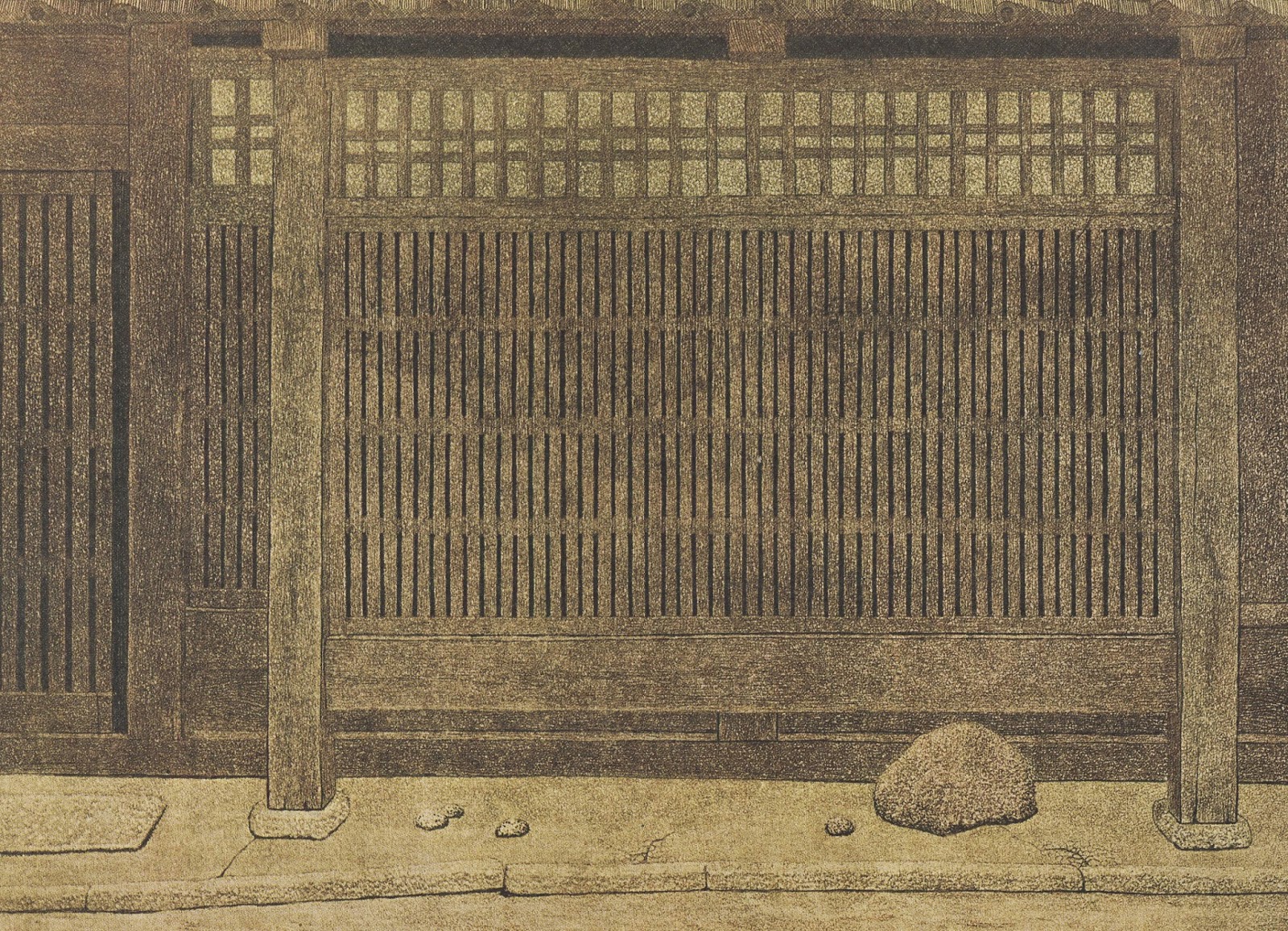 Mandarins, the most recent collection of Akutawaga’s stories to appear in English, was published in 2007 by Archipelago Books.    Of the fifteen stories, three are available for the first time in English. In an afterword, the translator Charles de Wolf suggests that for non-Japanese readers, Akutagawa's name is: "most likely to be associated simply with Japan's oft-noted history of literary suicides,"
Akutagawa Ryunosuke has been hidden in plain sight for decades.  Akira Kurasawa’s 1950 film Rashomon, often included on lists of the great films of the 20th century, was based partly on Akutagawa’s first published story in 1915 – Rashomon.  One of several stories set in Japan's medieval period, Rashomon embodies its author’s envy of people who were able to put their trust in God.   When it was first published, the story attracted the attention of the Japanese novelist Natsume Soseki, author of Kokoro and I Am A Cat, who became a mentor to the fledgling writer.  Another important work In The Garden revolves around a sickly young man with tuberculosis who world contracts to the confines of a walled garden.
Mandarins, the story, comes as a surprise. While its title suggests a class conscious tale, instead the character's ennui is momentarily overcome by a moment of grace.  during a train ride when he witnesses a young peasant woman he had been watching, throw mandarins, “the color of the warm sun” (symbolizing daily life and hope to the Japanese) out the window to her brothers as they say a permanent farewell. Spontaneity dissipates  the grayness of the ordinary and a “sheer intensity of spirit . . . renders the world sublime.” 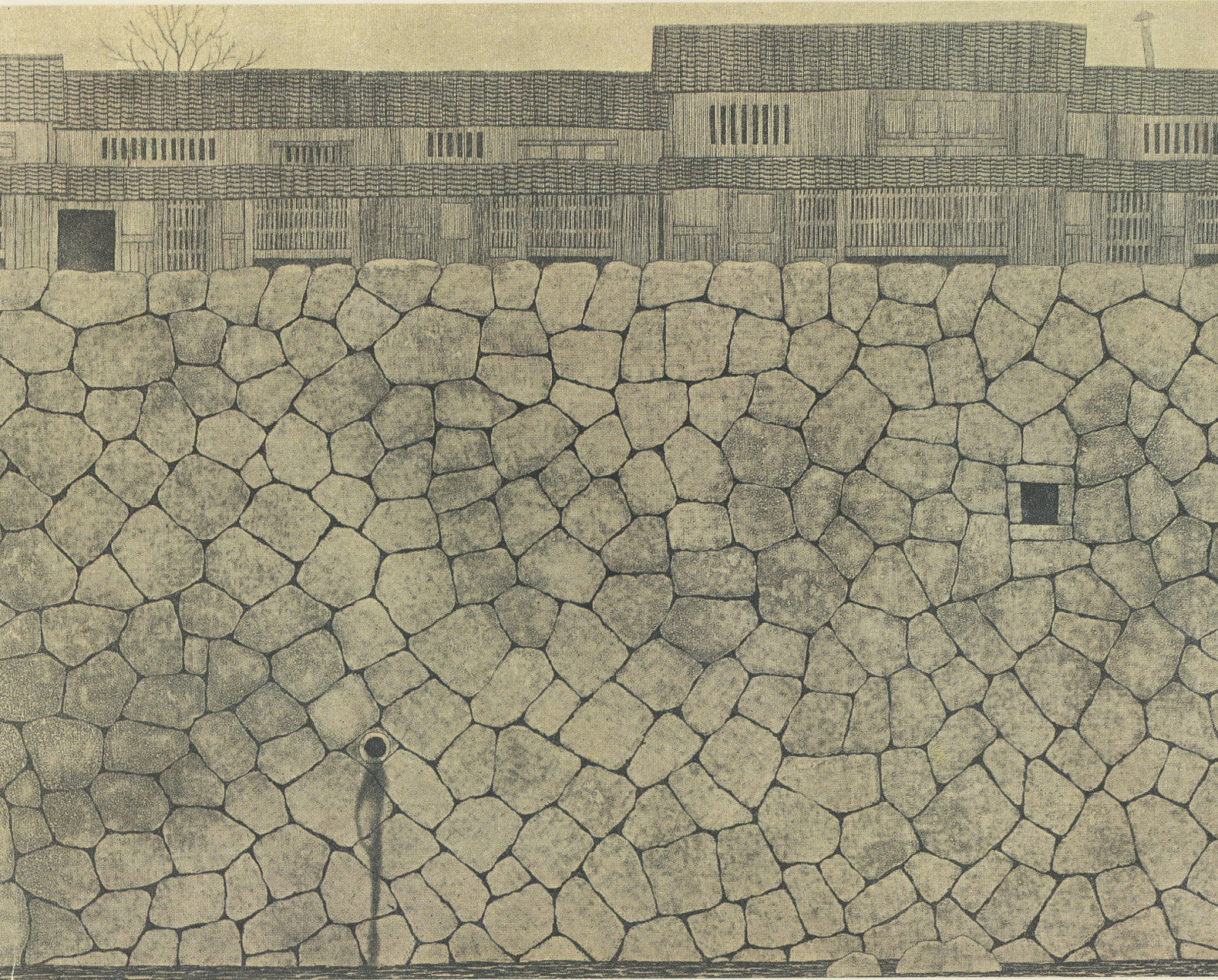 My introduction to Akutagawa’s work was A Fool’s Life, written in Akutagawa’s last year was published posthumously, and in an English translation in 1970, illustrated with etchings by Tanaka Ryohei, an artist who was born after the author’s death.  As Akutagawa’s health deteriorated, his writing became more personal.   Pain does that, whether physical or mental, turning one’s attention inward, the individual retreating into the self.  He described his characters who shared his aesthetic preoccupations as fools
In A Fool's Life, the protagonist, widely understood to be the author himself, appears first in a bookstore, on the second floor where he has climbed using a “Western-style ladder” to scale the heights.  Reading is the device that moves him and the plot along.  Even without knowing the biographical details Defeat, the last chapter in the book, suggests a final retreat. 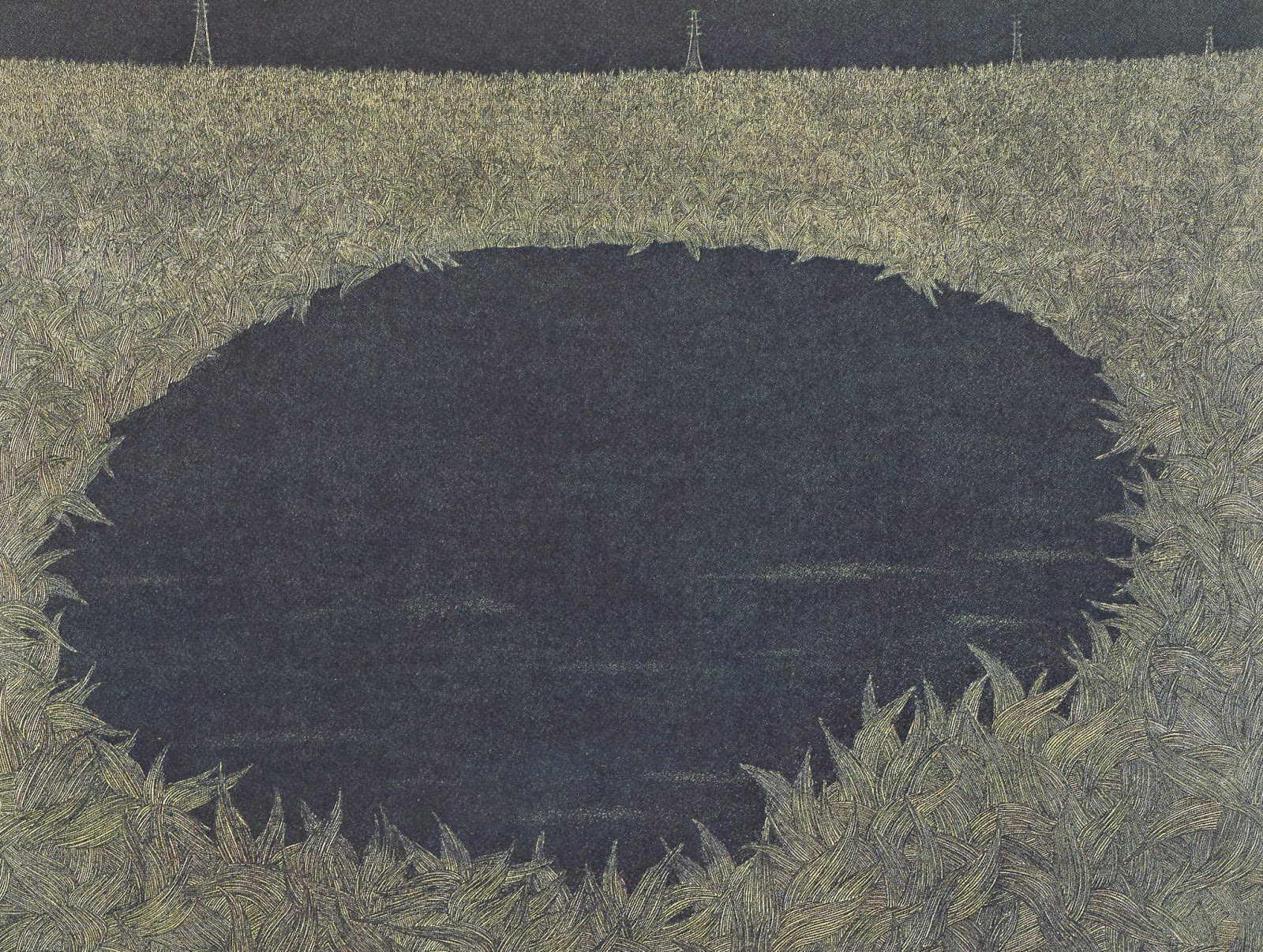 Akutagawa had suffered from insomnia for years and toward the end from frightening hallucinations.  He found his only source of relief in Veronal, a barbiturate that brought him "moments of relative lucidity."   Family responsibilities, other than for his wife and three sons, also weighed on him.   His sister's house burned down and his brother-in-law committed suicide, Brilliant though his writing was, his earnings were modest, at their best.
On Sunday, July 24, 1927, Akutagawa took a final, fatal dose of Veronal. He left behind more than 150 stories, most of which were published decades after his death.   A friend established a literary prize in Akutagawa’s name that is now one of Japan’s most coveted honors. 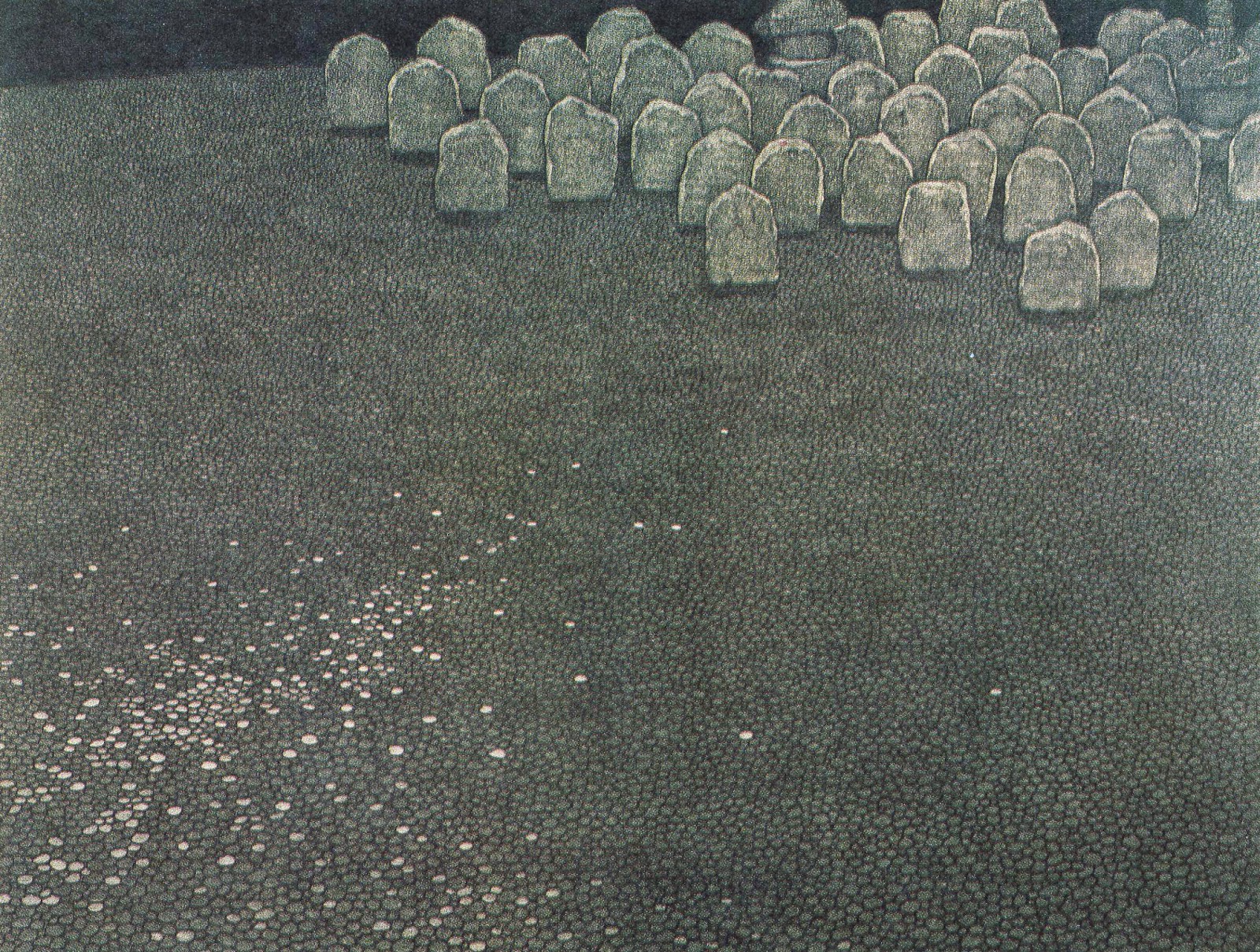 Tanaka Ryohei was born in 1933 in Osaka prefecture. He began to study etching at the age of thirty with Furuno Yoshio. The next year he became a member of the Kyoto association and began to exhibit his work publicly in 1966.  For A Fool's Life Tanaka made a dozen etchings, each one emblematic of the protagonist's brooding solitude.  At most, there are hints of human presence in these images, a concealed door, a group tombstones that appear to huddle together, placed at one end of long diagonal bracketed by tiny indeterminate pink flowers. As has been typical of Japanese artists for centuries, Tanaka  blithely rearrange Western notions of perspective, in one instance the better to display the beautiful asymmetry of the renowned Kyoto stonework.   In the context of these stories, the pond in a field takes on the aspect of a black hole.
In the U.S.,Tanaka's work is included in the collections of the Boston Museum of Fine Arts and the Metropolitan Museum of Art in New York.  Tanaka prefers to work in water-color etching rather than wood block printing. His themes draw of the Japanese landscape tradition but he has been particularly influenced by  the beautiful stonework of Kyoto city.   He continues to live and work in his home town of Takatsuki-shi.

Akutagawa : it's noted, there are some translations in French.
I appreciate one more time your choice of illustrations, Jane.

Tania, the illustrations are from the English language edition of A Fool's Life. I am happy that you like them as I do.