Luigi Ghirri: An Anthropologist of The Metaphysical 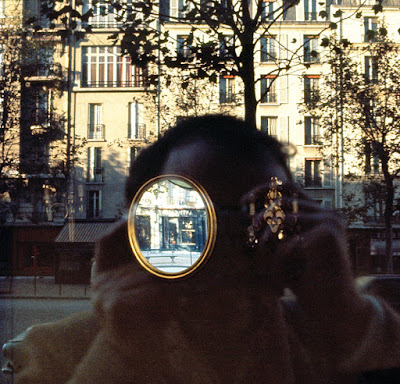 This is the kind of tromp l'oeil picture that many an amateur has accidentally produced, but in this instance the result is so perfectly achieved that you want to know who the photographer is - and where exactly is he in relation to the other elements in the picture?  Has he risen like Neptune from some watery deep just beyond the frame?  And when you learn that his name is Luigi Ghirri, do you wonder why his name is not more familiar?

Luigi Ghirri began as a photographer with the sense that everything that could be done with the medium had already been accomplished.  Undaunated, ee spoke often of how deeply he had been moved by the view of Earth as photographed from the Apollo 11 spacecraft.  "It was not onlh the image of the entire world, but the image that contained all other images of the world."   From this idea, Ghirri extrapolated the idea of the image-within-image, a framing technique that became a signature motif of his.  He brought the eye of an anthropologist to bear on the seemingly unremarkable sights of everyday life but with an intensity that has been described as metaphysical, a word often applied to artists of his native Emilia-Romagna region, such as Giorgio de Chirico and Giorgio Morandi.    Ghirri called these works  his "sentimental geography" but that only scratches the surface the image  those yellow traffic lights bobbing in the fog

Luigi Ghirri (1943-1992) grew up in northern Italy, a temperate area of broad fertile plains fed by the Po River, created millennia ago  when the sea retreated, leaving  marshlands behind.  The aspiring artist moved to Modena, a small city but no  backwater, located near Bologna, the regional capitol and proud home to the oldest university in the world.   Ghirri's studies in land surveying and graphic design coalesced when he found a new hobby -  taking pictures - that quickly became his chosen profession. 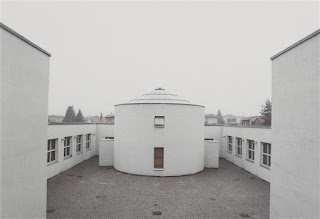 Conceiving his photographs mostly in series, Ghirri presented them in books more often than in exhibitions, which may have limited their initial impact on the public.  His first book Kodachrome, published in 1978,  featured the tightly cropped images that would become a signature.
Ghirri's last home was at Roncosesi, not  far from where he was born.  Although he traveled,  he found all that he needed for his work there.   Formal, cerebral, witty, Ghirri always intended his photographs to explore rather than  represent what he saw  before him.


“Everything has a blighted, faded quality about it now. Still, if you look at it for a long time, the old charm reemerges. And that is why I can see that I will lose absolutely nothing by staying where I am, even by contenting myself with watching things go by, like a spider in its web waiting for flies. You need to look at things for a long time…” – Vincent van Gogh
Ghirri copied this quotation from a letter written by Vincent Van Gogh to his brother Theo in his own journal. 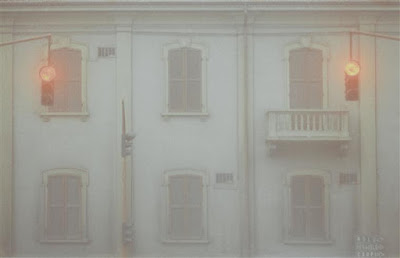 Although admired during his lifetime, Ghirri's work has only grown in importance since his untimely death from a heart attack at the age of forty-nine.  "...(N)ow, in their faded and aging present state, Ghirri’s prints from the 1970s and ’80s signal themselves as relics of the first wave of the then-new colour photography, carrying with them both prescience and nostalgia.." Christy Lange wrote for Frieze in 2011.
In 2009, the Aperture Gallery in Manhattan hosted the retrospective It's Beautiful Here, Isn't It?, devoted to the work of the Italian photographer Luigi Ghirri (1943-1992).  Then, in 2013,  Matthew Marks Gallery, also in New York, devoted an exhibition  to Luigi Ghirri: Kodachrome.  This exhibition coincides with the republication of Ghirri's much admired book Kodachrome, by MACK, London, UK: 2012., a book he originally published himself in 1978.