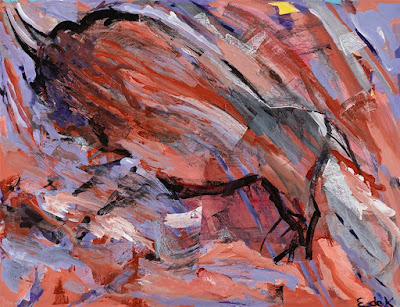 I. Although she is better known for her portraits (1918-1989), Elaine de Kooning was a painter of vivid and vigorous abstraction; for her abstraction was definitely an expressive mode. Her aim for her more abstract work was this: "I wanted a sense of surfaces being in motion."

Cave #24 Red Oxide Wall is one in a series that de Kooning called "Cave Walls," inspired by the cave paintings of Lascaux.  Of her first visit to Niaux in 1983, she  recalled how impressed she had been, saying, "the walls, even those without paintings, seemed to bellow with animal forms."  As a child, Elaine had loved to draw animals.

De Kooning believed that she had seen the origins of Abstract Expressionism in the ancient cave paintings.  "There's...a tremendous immediacy about the cave work which has much more to do with today's art, than, with, let's say, the Renaissance art."  The textures, cracks, and bulges of the walls resembled her own painting techniques, her use of strokes and drips and layering through collage, all in  a single work.  In Cave #24 Red Oxide Wall  thick strokes of red, white, and blue rush downward, and are scattered about at bottom by  forceful black strokes that suggest a bull in full charge. Here, as in all of Elaine de Kooning's abstract paintings, nothing is static.

De Kooning became a regular contributor to Art News in 1948 and. although she, like her husband, was a painter, she was pigeon-holed as an art critic. Again, like her friend Lee Krasner, de Kooning's efforts to taken seriously for her art were impeded, not helped, by her marriage to a famous male artist.  As the old saying has it:  marriage is only big enough for one and a half persons and guess which one gets the lobotomy?

II. "The end of prehistoric times was precipitated by the advent of writing....in brief, prehistory comes to an end when rhe story begins." - Eric Chevillard

And the beginning of the rewriting of prehistory began in 1940 when an eighteen year old boy found an opening in a wall of rock that led into the caves of Lascaux in southwestern France.  Historians had studied remnants of the early Roman settlements in the Dordogne for a long time but the revelation of Paleolithic artifacts pushed the region's first known habitation back some two million years.

When the caves were opened to the public , entering along with the thousands of visitors were light, moisture, microbes, and fungi that began to degrade the wall paintings. Eventually the French Ministry of Culture came up with a plan to stabilize the precious artworks by creating an alternative series of faux-caves, complete with copies of the Lascaux paintings.  When reality gets turned upside down, is there anything that fiction can add?  Enter Etic Chevillard.

If Chevillard's fictional worlds seem at first far removed from our own but then, without our being aware of how it happens, their orbits begin to run in parallel with the known world or even collide with it.  This is the world that appears in Chevillard's Prix Feneon prize winning novel The Crab Nebula (1993) whose protagonist, a man named Crab, may be out of his mind but he greets the possibility with genial curiosity.

This modest, off-the-cuff lecture does not have as its sole aim the clarification of the meaning of my trade, nor is it intended as the proof of my credentials in the matter; its main purpose is rather the additional reprieve it allows me by justifying my reticence to get down to work..."

These are the first words the protagonist addresses to the reader. Is Boborkine an archaeologist, a tour guide to the caves, or a clerk in the gift shop?  And who is Professor Glatt?  Archaeologist or art historian, but definitely "the most authoritarian authority in this field." At the end of this novel that manages to be both dilatory and succinct, we are no closer to understanding the cave paintings than we were when we began.

Eric Chevillard (b.1964) and the postwar French writers of the Nouveau roman (Alain Robbe-Grillet, Nathalie Sarraute, et al) and Eric Chevillard (b.1964) share a  trait that perplexes and irritates their critics -  a lack of structure.  But, unlike the unleavened seriousness of his predecessors, Chevillard is a writer of cheerful absurdities are elliptical but not indecipherable.  "Man will only ever address himself to man, in a closed circuit, man finishes man."  Suitably then, Prehistoric Times ends with our protagonist, a man who closes himself up in a room to contemplate the afterlife of paintings he has not yet painted.

To read an interview with Eric Chevillard by his translator Alyson Waters....