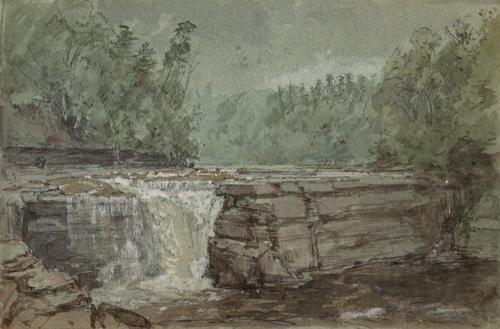 " This mode of study productive of knowledge  - it makes a man a botanist, a geologist, he is not satisfied seeing things merely upon the surface.  He studies deeper.  The knowledge he gains is communicated to his work, so that while it possesses beauty as a work of art, it is scientific and historical, scientific from the. great character that pervades it, and historical because of the truthfulness with which it represents the country..."
- Jasper Cropsey, from as essay "Nature and Art," New York Art Union, August 24, 1845.

Jasper Crpsey often remarked that his goal in creating landscapes was to capture "nature as she is."
The original sketch for Trenton High Falls (1880) appears in a sketchbook that Cropsey carried with him during the years 1855-1856.  You can see traces of his architectural training in the detail and precise placement of his markings in this rendering of the upper falls. I can attest to the accuracy of the work: I have visited Trenton on one of the two weekend of the year that the area is open to the public. The architectonics of the horizontal rock formations are the terraced bench that the waters foam and swirl over, above, and below.  The trail that Cropsey walked to the top of the falls was laid out in 1822 with funds provided by Joseph Bonaparte, brother of France;s Emperor Napoleon

There are many waterfalls in upstate New York named "High Falls."  The Trenton High Falls are located on West Canada Creek which flows south from the Adirondacks to the Mohawk River east of Oneida Lake.   Before Europeans arrived, the Haudenosaunee called the falls Kay-a-ho-ra, or "slanting water."

The terraced levels of the falls are remnants of centuries of geological movement.  The limestone and the locale have contributed the name Trenton Group to the limestone bed that extends from upstate New York to Minnesota. It is a sedimented stone rich in fossils: Concularia, an ancient "armored' jellyfish; spiny-skinned starfsh and sea stars; cephalopads (shelleed mollusks with tentacles); snails and tiny moss animals.

Cropset made frequent sketching trips to such locations as the White Mountains of New Hampshire, Greenwood Lake and the Ramapo Valley in New Jersey and Canada during the 1850s.  Later he would make engravings from some of his sketches   Cropsy was one of the most accomplished draftsmen among the artists of the Hudson River School, as you can see.  Although he was strongly influenced by Thomas Cole, Cropsey's "truth to nature" was much less fanciful than Cole's  roamntic and allegorical paintings.

Jasper Cropsey (1823-1900) was born on Staten Island and began to sketch what he saw around his family's farm as a fragile child, often kept home from school by illness.  Trained as an architect,  Cropsey turned to the study of watercolor and oil painting at the National Academy of Design and exhibited his first landscapes at age twenty-one, soon abandoning his architectural practice.  He was a member of the Art Union, a group founded in 1839,  dedicated to teaching art literacy to the citizens of the young nation.

Forgotten after his death in 1900, Cropsey's work was rediscovered in the 1960s when there was a revival of interest in the Hudson River painters.  His home "Ever Rest" in Hastings-on-Hudson was placed on the National Register of Historic Places in the early 1970s and now includes a gallery devoted to Cropsey's work.

This oil painting by the Danish artist Ferdinand Richter shows the entirety of the falls in Below (Trenton) High Falls.  Painted in 1858 while Richter was on a four year visit to the States, at a time when picturesque waterfalls were becoming popular vacation spots, it is one of most beloved and reproduced works from the collection of the Munson-Williams-Proctor Art Institute. 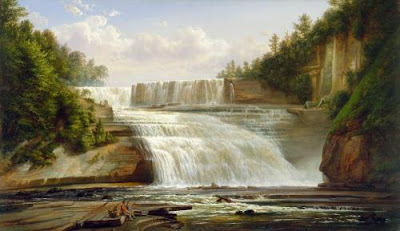 Note: If you are in the Mohawk Valley and would like to visit Trenton High Falls, visit Town of Trenton for information.

Absolutely stunning! They should teach this in public schools and take the students on field trips!!

It's intriguing to realize that at one time Trenton High Falls was as popular as the mighty Niagara Falls. Of course, Trenton is on the southern edge of the Adirondacks and before the invention of air conditioning people use to visit here and in the New England states to escape from the heat in the cities.