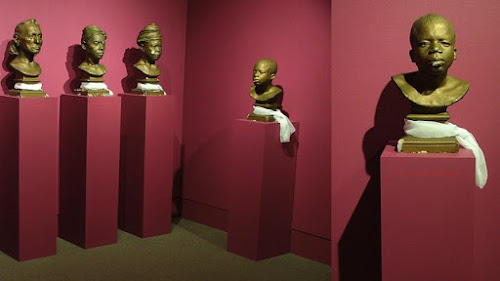 "I get everything that satisfies my soul from bringing together objects, manipulating them, working with spatial arrangements, and having things presented in the way I want to see them" - Fred Wilson

I. An installation artist who shakes up traditional museum presentations, an archaeologist who digs into museum archives to uncover previously untold stories, Fred Wilson is an artist with a mission. To call him a conceptual artist barely scratches the surface of his work. When Wilson speaks of remembrance he intends to remind viewers that museums collect in order to recollect. Wilson is, in his own description, "African, Native American, European, and Amerindian."

Fred Wilson's SO MUCH TROUBLE IN THE WORLD - Believe It Or Not at the Hood Museum in 2008 asked the question: what does it mean to be viewed from the outside by those who impose their interpretation rather than extend understanding?  In the photograph above we see  busts on pedestals, originally created for an anthropological exhibit at the 1904 St' Louis World's Fair.  At the time, it was called the Louisiana Purchase Exposition - an overtly expansionist declaration of intent.  A prominent and popular display was "The University of Man." It included temporary villages of peoples from around the world, along with life-cast models of the inhabitants that were taken and shared among scientists of the day as an encyclopedia of  racial "types"

These are the busts that Wilson renamed,  shrouding the derogatory labels with cloths (Onondaga, Sioux, Kongo Bakuba, Pygmy, Negrito, Tagalog, etc.) in  heavy cloth. His captions honor their individual humanity:  "I have a family, "  "Somebody knows me - but not you," "The ancestors remember me."  When I think about this transformation I recall the unease I experience looking at figures painted by Paul Gauguin during his years in Tahiti.  There is no glimmer of feeling, no sense that the models were open to him or that he even recognized the chasm between artist and subject.

The figure at right in the photograph above, Ota Benga (1883-1916), was a 23 year old member of the Mbuti people from the Congo who  was purchased from slave traders by American missionary Samuel Verner  to inhabit the anthropology exhibit at the 1904 exposition. Later Benga was displayed at the Bronx Zoo in a cage with an orangutan.  A committee from the Colored Baptist Ministers Conference  protested his treatment and eventually Benga was transferred to a seminary in Lynchburg, Virginia. But Benga wanted to go home to Africa so depressed and  stymied by the outbreak of WWI, he committed suicide. 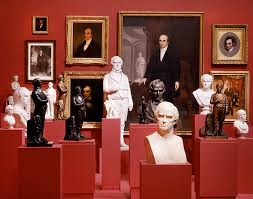 II. Daniel Webster's position is an outsize one in relation to Dartmouth College where the exhibition SO MUCH TROUBLE IN THE WORLD - Believe It Or Not! took place. Founded in 1769 as a college to educate Native Americans, Dartmouth soon moved away from that ideal.  In the meantime the school had founded a museum known as Dartmouth College Museum in 1772, making what would eventually be renamed the Hood Museum once of the oldest in the nation.

Daniel Webster (1782-1852), the son of a farmer, graduated from Dartmouth in 1801 and enjoyed a long career as a lawyer, statesman, and orator.  When Webster won a major case at the U.S. Supreme Court in 1819 that guaranteed the right of the college to remain private and free of government interference, its museum  became a repository of for all sorts of Webster memorabilia. But then in 1850, while sieving as U.S. Secretary of State, Webster brokered the Missouri Compromise, that extended the reach of slavery into the western territories.  Fred Wilson made multiple uses of paintings and artifacts to construct his alternative narrative of the museum's collection with regard to Webster's legacy.  His touch is deft, surgically precise. He shows rather than tells; like a prestidigitator, he can make visible what has been hidden in plain sight. 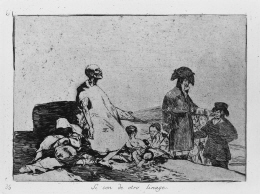 Wilson evokes Charles Wilson Peale's American Museum in Philadelphia,  considered to be the first museum in the United States, collected memorial portraits and all manner of curiosities. But Wilson opposes Peale's anodyne project with Francisco Goya's Disasters of War, a series that reveals the monsters that trouble the dreams of reason in the Age of Enlightenment. He confronts viewers again and again with the barbaric underside of civilization.

Fred Wilson channels Peale's showmanship in his  allusions to Ripley's Believe It Or Not!  Robert Leroy Ripley's was a self-taught artists who received an honorary degree from Dartmouth in 1939, prompting him to donate items from his Odditorium to its museum.  Ripley made his audience decide the  truth of his visual displays, weighing the scale in his day was the "scientific' concept of the "primitive" as a human category.

III.  At the time of the publication of The Voices of Silence in 1965, a famous photograph of Andre Malraux appeared in Paris Match, the author stands over an array of images spread out around him on the floor.  Its title was  "Museum Without Walls." He believed this demonstrated the unity of human experience, a belief congenial to the cosmopolitan European white male.  Malraux, dissatisfied with the museum's dependence on portable objects, lamented that "Napoleon's victories did not enable him the bring the Sistine to the Louvre."   Of course, some have argued that, for instance, the Elgin Marbles, were never intended to be portable and yet they were removed from Greece and now reside (contentiously) in the  British Museum.   In contrast to Malraux, Fred Wilson was photographed lying on the floor among pictures of Daniel Webster, not the figure of Olympian detachment but one immersed in a contentious history.

Fred Wilson was born in the Bronx (1954), attended Music & Art High School, and received a BFA in Fie Art from SUNY Purchase.  To support himself at college Wilson worked as a guard at the Neuberger Museum. Wilson's first major installation "Mining the Museum" at the Maryland Historical Society, placed unlikely objects together to reveal overlooked viewpoints on the colonization, slavery, and abolition in the state.  He received a MacArthur Fellowship in 1999 and in 2008 he became a trustee of the Whitney Museum of American Art.

Fred Wilson: SO MUCH TROUBLE IN THE WORLD: Believe It Or Not! by Barbara Thompson, et al,  Hanover, University Press of New England: 2006.

3. Francisco Goya - "They May Be Of Another Race" from The Disasters of War, circa 1810-1820, etching, drypoint, burnisher on wove paper, National Museum of Western Arts, Tokyo.

Posted by Jane Librizzi at 3:38 PM