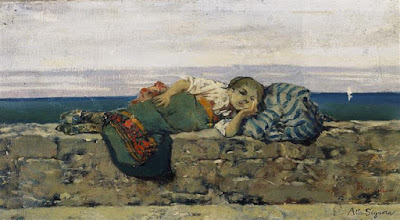 I.
"And this our life, exempt from public haunt,

Finds tongues in trees, books in the running brooks,Sermons in stone, and good in every thing."
- William Shakespeare, As You Like It, Act II, Scene I

For the young peasant girl in Telemaco Signorini's painting, a stone wall is a hard yet welcome resting place, a good thing in the middle of a work day.   Her weariness is underlined by the position of  her arms,  one cradling her cheek, the other protectively curled around herself.  This subtle but impressive structural gesture is just one in a beautifully  plotted composition. The panoramic format,  familiar now from its use in films,  (its height to width ration of 05:1) was often used by Italian painters in the 19th century.  For them it was a way of connecting their work to their Renaissance predecessors whose expansive works often filled entire rooms.

Telemaco Signorini (1835-1901) was the son of a Tuscan court painter.  As a student in Florence he gathered with fellow artists  at the aptly named Caffé Michelangelo.  Together,  they soon attracted a name to themselves - the Macchiaioli - or painters of patches of light and dark.  As such, their work anticipated the experiments  of the Impressionists in France.  In 1887 the painter Giovanni Segantini wrote that the characteristic art of their time was all about light.
Italians in the  19th century were confronted by a different reality than their  counterparts in France; industrialization had not yet blemished the landscape and economic conditions were bleak.  For Italian artists, social and political concerns were just as important as new techniques or theories. Overpopulation and over-farming had exhausted the  soil; droughts and epidemics left the people undernourished and overworked by a depleted landscapes.  If the stones could speak, sermons  indeed.
The artists collectively known as the Macchiaioli began to meet at Caffe Michelangelo in the late 1850s.   A decade later the writer Vittorio Imbriani arrived in Florence and in 1868 he published a pamphlet about the group La quinta Promotrice.  According to Imbriani, the macchia was "the image of the first distant impression  of an object or a scene, the first and characteristic  effect, to imprint itself on the eye of the artist."    Further, "And this organization of light and dark, this macchia, is what really moves the spectator..." (quoted from Known and Strange Things by Tejo Cole, Random House, New York: 2016, p.186.)

II.
"Who knows if the sky has another sky above it?....Who knows if the light itself isn't  inside another light?  And what kind of a light is it, if it's a light you can't see?"


Not enigmatic really, Antonio Moresco's Distant Light (La lucina: 2013)  is a story of two characters, a man living in an abandoned village and a small boy living in an abandoned house.  The man has chosen to live simply, in a house without electricity,  hoping to hear answers to his questions as he walks,  he talks with any living creature he encounters.   He talks to the trees, asking one that appears to be dying,  “How do you live like that?”   In the dark when he startles two badgers, one scurries across the road but the other is frozen in fear.  “Cross the road!” he urges the frightened animal.  “There’s someone waiting for you on the other side.  I’ll stay here, don’t worry, I won’t hurt you.”

As he lies in bed at night, he begins to notice strange lights twinkling from across a ravine, emanating from the spot where a deserted stone house stands.   When he consults an old man in the village, he learns  to his amazement that the farmer has plotted what he takes to be alien sightings on his computer.  Still  unsatisfied, the narrator traces the light from his bedroom window to the house where a little boy, shy but  preternaturally self-possessed, lives alone.  Their tentative, growing connection suggests answers to questions the narrator, and by extension the reader, deeply wish to learn the answers.


Antonio Moresco (b.1947) began publishing his work when he was forty-seven, he has written more than twenty books,  and  has been a finalist for the Strega Prize.  Among  his favorite writers he names  Dante, not the Divine Comedy but rather the Vita Nuova, Shakespeare,  Cervantes, and the Swift of Gulliver’s Travels.  Italian critics have reached for comparisons  to Canticle of the Creatures and De rerum natura.  Moresco describes his intentions as being "far away from the idea that it is just entertainment...I try to broaden its horizons, as the boys try adventure, risk, not the reconfirmation of myself. Scripture is the eye of the needle that allows me to pass by on the other side.”  As for Distant Light, “ The fairy tale is a revolutionary thing, everything becomes possible” 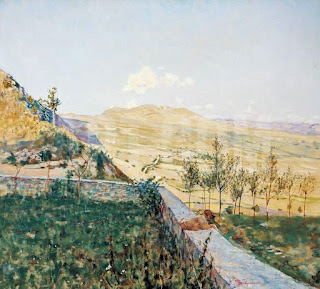 "Here and there, along the side of the lane, are stones jutting out that were once used as steps for climbing up to the small vegetable plots above, planks impregnated with lime and half-broken, abandoned flower pots, invaded by relentless lichwort or other plants and other forms carried by the wind.In one spot, over a low wall where there must once have been a vine, the large indefinable leaves of vegetables gone wild spread along the ground and then spill over  with tendrils searching for anchorage."
-   Antonio Moresco, Distant Light, translated from the Italian by Richard Dixon, Brooklyn, Archipelago Books : 2016.
For relaxation the urban dwellers of ancient Rome liked to walk along their stone walls,  walls that were  built thickly to keep enemies and weeds alike at bay.    In a country where volcanic rock was plentiful, stone masons made  art out of necessity; it is said that a good mason can "see" the inside of a stone.  Artists responded to the strong aesthetic appeal in walls, even  crumbling ones, recognizing in them the organizing principle for a good story. As for the dog in Signorini's End of August at Pietramala,  working farm dog or household pet, he has a front row seat in the shade.