Lady Of The Beasts: Nancy Spero 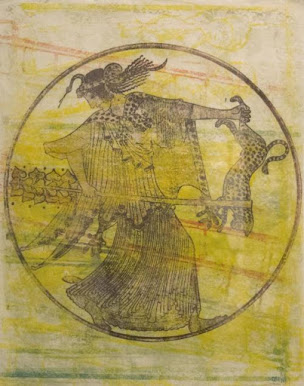 "I have come to the conclusion that the art world has to join us, women artists, not we join it." - Nancy Spero

Spero believed that archetypes, exemplified in the goddesses of mythology, reverberate through our contemporary lives. In 1969 when women were fed up with the assumptopn of male superiority by men in artists' coalitions, they broke away to form W.A.R. (Woman Artists in Revolution) Nancy Spero was there. The feminist movement of the 1970s inspired Spero to explore female sexuality, suffering, and heroism. Her celebrations of life from the ancient world to the present re-figured the representation of women in art. Spero's task was nothing less than writing women back into history through art.

Artemis was the goddess of the hunt, wildlife, and nature, making her the most venerated goddess of rural people. As the protector of young girls, she represented chastity. Artemis was also a Maenad, a female follower of Dionysius, god of wine and drunkenness.  Maenads could be recognized by their animal-skin clothing and by their frenzied, demented dancing.

Spero borrowed her Artemis from a 5th century BCE kylix, a decorated drinking cup.  She holds an animal in her left hand and in her right she grasps a thyrsus, a tall walking stick or staff, traditionally made of fennel and garlanded with ivy. The earliest surviving image of Artemis is an archaic Greek Potnia Theron ("Queen of the Beasts") We can easily imagine such an image on a wall, perhaps an antique fresco, so it comes as no surprise that Spero would begin making works that scroll off the paper  onto the wall.

"Dear Lucy, The enemies of women's liberation in the arts will be crushed.  Love, Nancy" - a letter from Nancy Spero to Lucy Lippard

"Dear Nancy, the enemies of women's liberation in the arts will be upended by envy." - Martha Rosler to Nancy Spero

"I suppose I felt doomed to be an artist ear;y on, because of the way I drew all over the margins of my textbook." - Nancy Spero

Nancy Spero (1926-2009) was an American artist known for confronting injustices in her work, believing "the personal and the political are indistinguishable." She studied at the Art Institute of Chicago and after graduating in 1949, she trained for five years in Paris at Ecole des Beaux-Arts and  at Atelier Andre Lhote,  already focused on painting the human form. After returning stateside, Spero married fellow artist Leon Golub; the two would collaborate throughout their careers and shared a commitment to new expressions of human forms.  In the 1960s, Spero changed her medium from canvas to paper. Spero was a founding member of A.I.R.,(Artists in Residence), the first cooperative women's gallery in SoHo.

Posted by Jane Librizzi at 1:49 PM

Hello, Jane. This reminds me of The Blazing World, Siri Hustvedt’s beautiful novel that speaks so well about women artists.

Tania, I agree. I've read each new Hustvedt book as it came out with much enjoyment.

This is way off track, but I had never heard of Nancy Spero, even though I knew of the Woman Artists in Revolution back in 1969. Nonetheless that name Spero rang a bell and it took me hours to think of the link. Jane Carol Ginsburg, daughter of the late Ruth Bader Ginsburg, married George Spera!

The two families may not be connected, but I wonder if they came from the same part of the world.

Hels, Faith Ringgold, who is still living, is the best known member of the group, I believe.

I always learn something new from you, dear Jane! I will look into this group. Thank you!

Rouchswalwe,there is a documentary about the group.

thank you for the link!

Rouchswalwe, thank you for those kind words. I saw the Nancy Spero in person and it was complexly made and yet utterly clear - if that makes any sense.