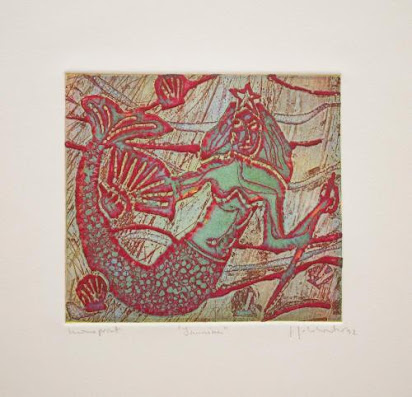 they go at midnight

to welcome the new year.

they assemble by the sea.

into the accepting waves.

when the year turns to become

- from "To Become Green Again" by Lorna Goodison, Kingston, Jamaica

Janaina is a goddess whose origins are in the Yoruba religion of West Africa. The Yoruba people believe in Ashe, the energy that animates all living things and unites the human with the divine.  In Goloborotko's rendering she takes the form of a mermaid wearing a star crown and surrounded by clam shells, a latter-day Botticelli Venus, perhaps. Clasped in her right hand is a shell fan and in her left she holds a sword. A goddess of both beauty and power.

Brought over to the Caribbean and South America by slaves, Janaina has been represented as a sea spirit  celebrated at various times of the year in different places. For example, in Rio de Janeiro people dress all in white and gather on the beach to welcome the New Year, setting off fireworks and throwing white flowers and other offerings into the sea in the hope that Janaina grant their wishes for the coming year. Some offerings are even sent to sea in tiny wooden boats.

Sheila Golobortko is a Brazilian artist who teaches at the University of North Florida in Jacksonville and she is also the founder and director of the Goloborotko Studio in Brooklyn, where she makes prints and conducts print-making workshops.

A goddess and mermaid I didn’t know at all !

Tania, there is also a holiday celebrated in the Caribbean cultures called Junkanoo. It is celebrated on December 26 each year and commemorates the emancipation of slaves with street parades.

Stunning! Thank you for this, dear Jane!!

Glad you liked this. Rouchswalwe