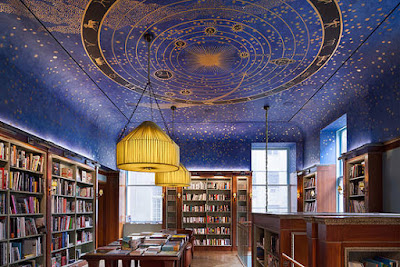 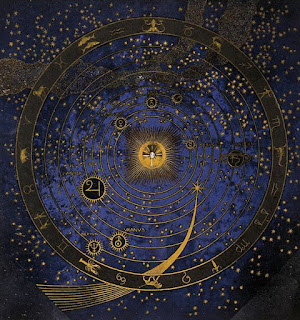 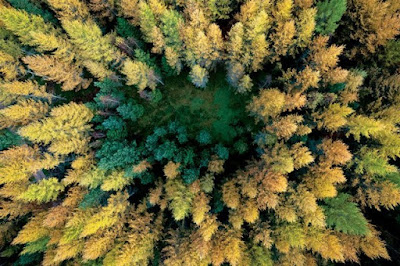 At first glance, this photograph looks like some strange never-before-seen exploding flower.  Then as you gradually become aware that the "petals" are trees, you may wonder if this is some kind of satellite photo but, no, it seems too close to be transmitted from outer space.

In fact, all the photographs here were taken by a photographer in a glider plane.  Kacper Kowalski takes his pictures from the air while at the same time piloting the plane; no minor feat but then Kowalski has been rated as the second best glider pilot in the world.   He began his working life as an architect but it interfered with his other interests - flying and photography - so he quit his job in 2006.  Since then Kowlaski has become a licensed pilot and paragliding instructor and has received awards for his photography. 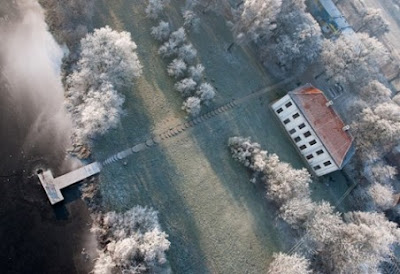 Pomerania, the "land by the sea" is a region in northern Poland, most of  it coastal lowlands bordered by the Baltic Sea on the north and a ridge of glacial moraines to the south, with small, contained lakes surrounded by forests.  Archaeological evidence shows that humans inhabited this area in the Bronze Age  thirteen thousand years ago;  Christianity came late, however, arriving in the 12th century CE.   It was in the large port city of Gdansk that the Solidarity movement challenged the Communist regime in the 1980s.  This was where Kacper Kowalski was born in 1977. 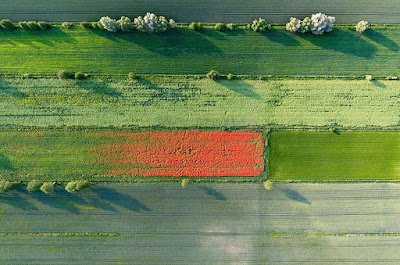 Kowalski moves in close and, slowly; his  images which look like puzzle pieces to begin with fit together to tell a story of an old land and the people who have lived and worked there for long.   Forests have been cut back to make way for farming; then again, the water sometimes makes inroads on the land, and people have to move their possessions  and their fowl to higher ground.  Kowalski's many photographs of  new growth forest and farmland under cultivation remind us that whether or not a particular place in inhabited, it is not untouched.  Humans do not exist apart from nature, a false dichotomy that vanishes in the larger view, as is the division of the visible between realism and abstraction. 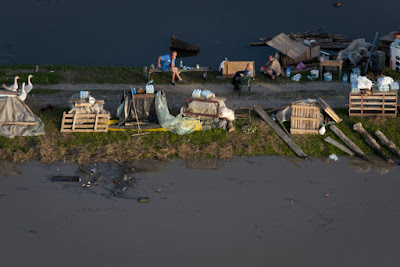 To see more photographs, Kowalski's book Side Effects (2014) is available in English and prints of his work are at Gallery Warsawa.
Visit the website Kacper Kowalski (in Polish).
Posted by Jane Librizzi at 8:05 AM No comments: