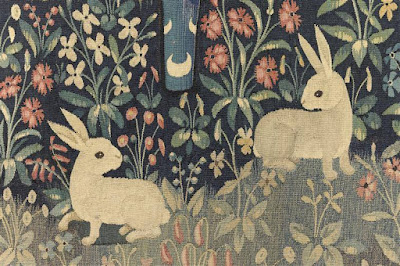 "To the carrot, the rabbit is the perfect incarnation of Evil."  - Robert Sheckley.

Add marigolds to that thought and start a list.  When I was little I was taken aback by my mother's frustration at finding her newly planted marigolds serving as lunch for the neighborhood rabbits.  "Why can't they eat the dandelions instead?" she wailed to no one in particular, certainly not the rabbits who continued nibbling contentedly until she chased them away.  The rabbits would often  hide under the family sedan parked in the driveway and stare up at us with what, to my six year old eyes, looked like mingled sorrow and reproach.   Why else plant those luscious, low-growing flowers, if not for them?   I was so upset by this early encounter with adult insensitivity and importuned so loudly that eventually my mother promised to plant more marigolds in spite of the predictable results.   And there were other little adversaries in the garden.  From my mother I learned that squirrels dig up spring bulbs; they eat the sweet tulip bulbs but disdain the bitter taste of  daffodils,  replanting the bulbs in incongruous locations.  My mother was so attached to her gardens that each time we moved we had to drive by houses where we had once lived just for her to see how the flowers were being cared for.

Chaud lapin translates literally from the French as 'hot rabbit' but its meaning is metaphorical, something along the lines of 'randy devil.'

The late Robert Sheckley (1928-2005) was that rare exception among science fiction writers, one who had a sense of humor, albeit sometimes a dark one.  He gave one of his books the title Bring Me The Head Of Prince Charming;  I can imagine the outrage if a woman dared to use that title.

Image:
A detail from The Lady And The Unicorn, wool and silk tapestry, c.1495-1505, (Musee nationale du Moyen Age) Musee de Cluny, Paris.
The tapestries were deisgned in Paris and woven in Flanders.  They disappeared from puiblic view, only to be found by Prosper Merimiee, author of the novel Carmen, in 1841.  Merimee, it should be noted was an archeologist, among other things, when he discovered the tapestries moldering in a castle in central France.  Three years later, after George Sand saw them she began to publicize their existence.
Posted by Jane Librizzi at 8:45 AM

I for one am happy that the dandelions remain for the bees.

Rouchswalwe, chaud lapin, indeed. I know my mother wanted to give the rabbits "the dickens", another obscure phrase, but she saw how emotional I got about the rabbits and she let them be. Let a thousand flowers bloom, even if some of them are destined for lunch! And you're right to point out how important bees are to this process, those happy little polinators.