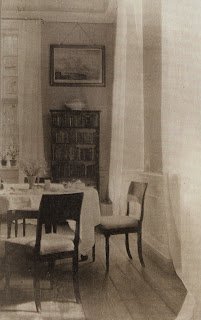 “”He succeeded in granting the most concrete and most commonplace things - a half empty parlor, a chair, a chest of drawers, a sofa, a beautiful book, a wall with a small forlorn picture, a while door, a short hallway, dust dancing in sunbeams – a quality not of this world, a reflection of sublime existence. His highly intense nervous life, his acutely sensitive emotional being, flourished only in this world of extreme simplicity and silence, tones were what he loved and sought – the tones of stillness. He heard…stillness, and that was where he really existed.” – Julius Elias, 1916 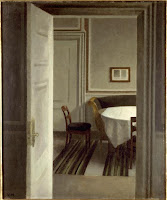 Something curious  about the paintings of Vilhelm Hammershoi is how our responses to them seem like Rorschach tests with art.  We may find a a partial explanation in  the words of  fellow Dane, the philosopher Soren Kierkegaard (1813-1855):  "We live life forward but understand it backward."    Hammershoi 's interiors  mesmerize the viewer through his consummate sense of organization but there is room for us to bring our interior lives to his paintings or bring his paintings home to our interiors 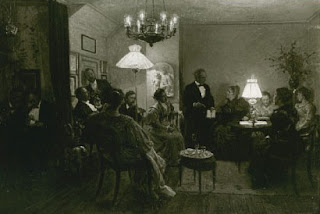 We also bring  modern preoccupations to bear on his work, finding abstraction in his seeming clarity and precision, and our relative unfamiliarity with Hammershoi's work in the context of Danish art with its considerable history. Most  Danish art of the early 19th century, considered the Danish  Golden Age, remains in Danish museums and has  traveled infrequently.  How we interpret the melancholy for the distance from that charmed period with Hammershoi's personal disposition is  an open question still. 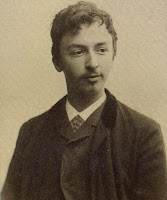 Photographs of Ida Ilsted  and Vilhelm Hammershoi, taken during their courtship, show another, pleasanter mood; no small distinction  when both parties came from artistic families.   Ida's brother Peter Ilsted  also painted quiet interiors like  Hammershoi's  and Vilhelm's younger brother Svend (1879-1916) was both a painter and ceramicist.  Where Hammershoi's self-portrait shows a  serious, inward-focused young man, the photographer caught him with a twinkle in his eye, the kind of look that may have attracted Ida Ilsted. 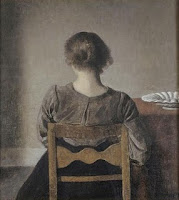 Some critics have speculated that there were mental difficulties in the Ilsted family to explain representations of Ida in Hammershoi's pictures, putting the onus on the sitter, while overlooking contemporary description of Hammershoi as "the first neurasthenic artist."
The convention of posing a female model with her back to the viewer was  an established formal convention in painting when Hammershoi employed it.  Repose, for instance, painted in 1905 and often reproduced, strikes me as quite lovely, an affectionate rendering of Ida with her soft  hair gathered in a chignon above the delicate skin of her neck .

This photograph taken in 1898 1898  suggests a more sensual side to Ida than the artist usually allowed the viewer to see.  The young boy pictured with them was their foster son Henry Madsen (1881-1921), possibly the son of art critic Karl Madsen, who is one of the guests in the photograph of the party at the Hammershois' Strandgade 30  apartment. 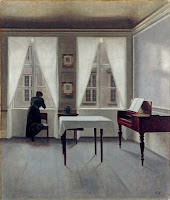 Early in his career, Hammershoi moved beyond realism to a personal heightening of reality by arrangement and omission.  Critics have noted anomalies, such as missing piano legs (in  the painting at right) and Ida's missing foot.   This painting is also unusual in showing us a  view of the building across the street rather than an indeterminate space of reflected light.  Light seems to dissolve the outer world in Hammershoi's otherwise controlled images, so what we get is something more like psychological realism rather than architectural verisimilitude. 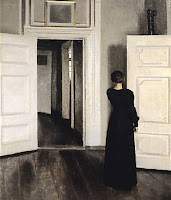 Emil Hannover wrote in 1907 of the successful Hammershoi exhibition at the van Wisselingh Gallery, London that the artist's interiors were "a silent protest against the gaudy and gaping tastelessness of our time."  But the Victorian taste for the overstuffed had never been that popular in Scandinavia.  In the photograph of a party at Strandgade 30 in 1899, the room is both less elaborate than a typical bourgeois parlor and more decorative than what  Hammershoi chose to paint. (In the photo, Vilhelm is seated directly under the lamp at the left and Ida is seated at farthest right.) 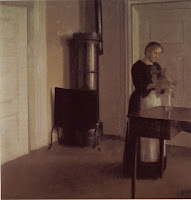 To look at photographs is to see what liberties Hammershoi took with furniture arrangements in his paintings.   Modern eyes may have difficulty adjusting to the 19th century floor plans, as well.  We are accustomed to houses and apartments designed as a group of rooms around a hallway, not to mention Freudian and Jungian symbolism with which we have invested  interiors and the doors that separate them.   Apartments in Christianhavn  were typical of a much older arrangement, being a series of rooms that opened  one into another: this made it easy to close off rooms  to conserve heat  in winter. Halls madee an additional expense as heating them was wasteful.

An open  door is often thought  to be symbolic shorthand for hope. Closed doors, as the thinking goes,  are symbolic of refusal, of finality. A closed door may also symbolize a break with the past. Carl Jung was rather heavy-handed in seeing doors as symbolically female, their doors opening one way - inwardly.  Tp ancient Greeks doors often represented the separation of the past from the future.  In a cheeky ripost the Shakespearean scholar Gary Taylor has called death "the one way walk through the door between culture and history." 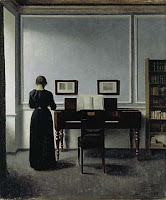 Doors have also been seen as symbols of refuge.  In A Dictionary of Symbols, J.E. Cirlot makes an interesting observation about doors:  "There is the same relationship between the temple-door and the altar as between the circumference and the centre; even though in each case the two component elements are the farthest apart, they are nonetheless, in a way, the closest since the one determines and reflects the other." 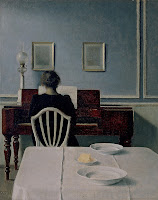 Throughout their married life the Hammershois  traveled often for extended periods, beginning with their six month honeymoon in Paris.  Another trip to London and the Netherlands lasted from October 1897 to May 1898, with a brief return home for the holidays, and followed on the heels of the sale of two paintings to the Russian impresario Serge Diaghilev.  Hammershoi was, in fact, enjoyed an international success never before accorded a Danish artist.

The German painter Emil Nolde lived in Copenhagen for some time around 1900 and he found Hammershoi to be a quiet person.   So did the poet Rainer Maria Rilke who visited in 1904 to collect material for a monograph on the artist that was never completed, unlike his 1903 publication Auguste Rodin.   "Hammershoi is not one of those about whom one must speak quickly. His work is long and slow, and at whichever moment one apprehends it, it will speak of what is important and essential in art." - Rilke

All of which brings me to the portrait of Ida, painted in 1907.  It is hardly flattering, suggesting the losses of middle age - but whose exactly?  The photographic evidence suggests that Ida was a pretty and spirited woman, and we know the couple moved in sophisticated company.   Ida Hammershoi (1869-1949) had more than three decades left to live;  not so Vilhelm, who died on February 13, 1916,  after several months in hospital.  The early signs of throat cancer had appeared around the time his mother Frederikke died in 1914.   Hammershoi had been plagued by neuralgic back pain since 1906 and was periodically confined to bed, unable to paint. 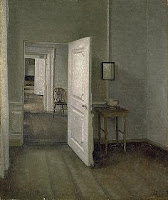 Beatiful and intersting. I love the painting of Hammershoi.

Thank you for this expose. I am very keen on Hammershoi's work, but knew little about him, which this has now addressed, (and more).

I don't like to make invidious comparisons but the works of Peter Ilsted and Carl Holsue are superficially similar to Hammershoi's, but don't hold our attention so well. Hammershoi suggests more than he shows.

Nice and I am glad to know that people are actually writing about Hammershoi paintings.I am keen to know about Hammershoi work.No one can compared with Hammershoi.In a word Hammershoi's work is awesome.Thanks for this shearing.U can visit here for agreat collection:Abstract Canvas Paintings

Thank you for sharing these paintings..I have never seen them and want to visit every one of them and feel like I am in the rooms! Wonderful feelings! Really caught my eye.

Never heard before of this wonderful painter. But I think of Vermeer, not for light, but for silence.
Remember the song whose refrain goes, The sound of silence ---That's what one hears, and sees.

Pumps, there are three books I can recommend: Vilhelm Hammershoi and Danish art at the turn of the century by Poul Vad, Yale University Press: 1992; Vilhelm Hammershoi, 1864-1916-Danish painter of solitude and light, Solomon R. Guggenheim Foundation: 1998; Hammershoi - The poetry of silence, Royal Academy of Arts, London & Harry N. Abrams: 2008.

Kim, visiting Hammershoi's paintings is reason enough for a trip to Copenhagen. I understand that the Strandgade 30 apartment is open to the public as well.

Touch 2 Touch, two of the three recent books on Hammershoi are the products of traveling exhibitions, one to New York City in1997 and the other to the Royal Academy of Arts in London in 2008. That's the only way most of us will get to see them in person, I think.

This article is terrific. While I like these paintings by Hammershoi, I find the mezzotints by Peter Ilsted (his brother-in-law) not only more interesting, but more alive.

Thanks for your comments. I will look for the mezzotints by Ilsted, which I've not seen before.

Hammershoi, beautiful and photographic. Seems so different. I loved to "meet" his works in your blog.

Thank you for introducting me to this Danish artist. Lovely stuff!

Anonymous, you are welcome. Although most of Hammershoi's works are in Danish museums, the internet has done much to spread his work. not the same as seeing in person but far better than not seeing at all.

Tambourim Zin, forgive for neglecting to reply to your comment for this long. Perhaps the Danish language has been a barrier to interested writers. There hasn't been much available in English until recently. Incidentally, I understand that the pronunciation of the name is Hammer-skoy.

Never heard before of this wonderful painter. Such a great painting....

Welcome, Muhammed. Most of Hammershoi's paintings are in museums in his native Denmark, although two are in the collection of the Musee d'Orsay in Paris. That's how I first discovered his work. There was a traveling exhibition at the Guggenheim in New York City in 1997 and one in London four years ago. Thanks to the internet, we can see most of his work no matter where we live.