Howardena Pindell: The Force in the Pattern 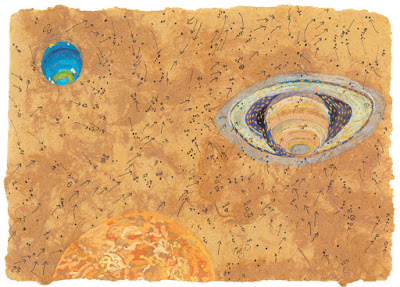 In Astronomy: Saturn and Neptune Howardena Pindell portrays the two planets in series of concentric circles moving through a space dotted with numbers and arrows, visitors from a secret graph.  In this ether figurative elements float in a sea of abstract brushwork. It is as though the structure of the universe was right before our eyes in a language whose key we are have yet to find.  As for the large round object at bottom, it could be Jupiter the next innermost planet to Saturn or it could be Earth representing human subjectivity The ragged edges of the image are typical of Pindell's paintings, the canvases usually unstretched and hung directly onto walls with ordinary nails.

Like Emily Dicksinon's learn'd astronomer who saw figures in columns and charts that measured them, Howardena Pindell has explained her desire to "atomize" art down to its irreducibly smallest  parts, similar to a mathematical exercise.  Pindell recalls how, as a child, she often saw her mathematician father write numbers down in a journal divided into grids. "I saw writing and numbers as drawing."  Another, darker,  memory,  is of a  car trip with her parents through the Midwest.  While drinking from a mug of root beer in Ohio, she noticed that the bottom of the mug had a red circle drawn around its edge.  In answer to her question "why", her parents explained that in the South black people were served separately from whites with cutlery and glassware marked with red circles.

Although we usually see pattern as decoration, Piindell explores its ideational force, using pattern to express  ideas.  She has worked mostly in an abstract style with figurative elements cleverly encoded; her preference is for details over generalities.  This has also allowed her to upend the cliched expectations of black artists to create earthbound art.

Howardena Pindell was born in Philadelphia and, in 1967, the year she earned her MFA from Yale University,  she was hired by the Museum of Modern Art.  While working at MoMA  Pindell became one of the original members of Artists in Residence, a women's gallery founded in New York in 1972 in response to the dearth of opportunities for women to show their work in museums and galleries, something she had direct experience with at work.  Pindell would return to this theme, elaborating with statistics gathered through seven years of research, with the results published in 1989 in New Art Examiner. She shook up the art world by showing how arts institutions were still deliberately  exclusionary, based on racism.

At the age of seventy-four Pindell finally had her first career retrospective in 2017, Howardena Pindell: What Remains to be Seen, at the Museum of Contemporary art in Chicago.  And in 2019 she received the Artists' Legacy Foundation award.