"Neither Out Far Nor in Deep": Giovanni Fattori 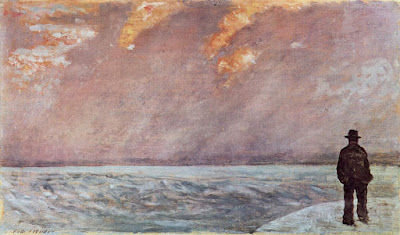 The people along the sand
All turn and look one way.
They turn their back on the land.
They look at the sea all day.

As long as it takes to pass
A ship keeps raising its hull;
The wetter ground like glass
Reflects a standing gull

The land may vary more;
But wherever the truth may be-
The water comes ashore,
And the people look at the sea.


Pairing images by the nineteenth century Italian painter Giovanni Fattori with a poem by a twentieth century American poet Robert Frost is not so fanciful as it might at first seem.   Italy is a country surrounded on three and a half sides (in length) by water and the Atlantic ocean in Frost's poem was the entry point and the orientation for generations of European settlers.  Oddly enough, the sea is a larger presence in French painting and literature than either of the other two.  Odd because in France the beaches and  fishing ports are like exiles in the outer provinces (Normandy, Brittany, Gasgogne, and Provence) while the capital of both country and culture in is far inland in Paris.

Giovanni Fattori (1825 –1908) was an Italian artist.   In middle age Fattori was attracted to the landscapes of the French Barbizon painters; because of their influence he gave up historical subjects for paintings outdoors (en plein-air) and became a convert to painting in natural light.  He was one of the founders of the group dubbed the Macchiaioli, painters of the light.  One of those was his friend Silvestro Lega; Fattori's painting shows Lega sitting on outcropping of rocks as he paints the waves  cresting around him.

Ah, the sea and the froth of the wavetops. I do miss the sounds and the smells and the sights of the sea. Funny since I grew up inland and spent so much of my youth in forests. It wasn't until much later in life that I stood on the edge of the Pacific and fell in love with it.

Rouchswalwe, on this scientists and poets agree: the sea was once our home and it still lives in us as our bodies are about 7/8ths water. I grew up in places never more than a dozen miles from the Atlantic Ocean. I bet you feel about the sun setting over the Pacific the way I feel about watching it rise over the Atlantic. It's closest earthly experience we can have to the immensity of the multiverse. So good to hear from you!