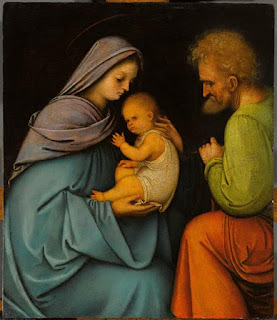 According to the Italian Malaguzzi Valeri, he definitively identified the artist in 1912.  The American expatriate Bernard Berenson  gave himself credit for the attribution, dating the discovery to 1890..  Given his track record, I am inclined to doubt Berenson but the one they agreed on was that the identification of of the late 15th century Lombard painter took four hundred years. We may also consider that the esteemed art historian Adolfo Venturi sided with Berenson.
Moving between Milan and the Veneto, Agostini da Lodi  was a bearer of Milanese style to Venice. His contemporaries prized the artist's work for its extravagance. but I like this Holy Family for its directness and simplicity. These qualities would have enhanced its power to make the Nativity vivid for n audience that mostly could not read and did not have direct personal access to Biblical stories.
Image: Giovanni Agostini da Lodi - The Holy Family - oil on wood pane, 16th century, Louvre, Museum.
Posted by Jane Librizzi at 4:52 PM 6 comments:

The shortest day brings with it the longest night.  Time to  begin the season of vitamin D cocktails.

Robert Gibbings (1889-1958) was an Irish artist, born in Cork.  His family opposed his intention  to study art but Gibbings persevered, eventually enrolling at the Slade School in London.  Among other media, Gibbings made wood engravings and from 1924 to 1933 he ran the Golden Cockrell Press.. He also illustrated books on travel and natural. history.  In an astonishment, he became the first person known to have made drawings under water. He was buried on the banks of the River Thames in the village of Long Wittenham.

Richard Florsheim: A Man For The Season

Ten years ago I received this Xmas card from Joanne Molina, editor of the online decorative arts magazine The Curated Object. As a Chicagoan, Joanne was familiar with the satirical lithographs of Chicago native Richard Florsheim (1916-1979). Their whimsical qualities delighted me.
I discovered  hundreds of Florsheims.  There are many landscapes that hint at the influence of Emile Bernard on the younger artist and they are worthy of attention but it is Florsheim's delight in the foibles of artists and their followers that makes merry.
Apparently, many Florsheim 'cartoons' date for the late 1950s, a moment of high seriousness and outright pomposity in the art world. The preferred mode in criticism was American triumphalism and its chief promoter was Clement Greenberg, who regarded the U.S. - and probably himself, truth be told -  as the arbiter of "advanced " art in contrast to the no so distant Nazi rampage through the art collections of Europe. Pop Art as a provocation was yet to come.
The "tablets brought down from the mountain" tone that Greenberg perfected has survived as the lingua franca for critics hoping to be taken seriously. In contrast, Florsheim's deflationary tactics are witty.  The man was no mean-spirited Philistine; he was an artist with serious credentials. There is exponentially more money at play in today's art world than there was in the post-war world but human nature remains pretty much the same as it did in the Florsheim School of Artists.
In the art world according to Florsheim, sculptors are presented as a wacky bunch. Take one Shistokovich, whose scrawny, angular figures are refractions of Giacometti characters.  Or Bolofinsky (H)e always did say that someday the world would catch up with him.") whose outdoor metalscapes  were forerunners of the television antenna. An apartment dweller thinks that the profusion of antennas .atop his building means that Bolofinsky's work is "selling like hotcakes." A work by Messovich titled Bald Ego looks like a patient on a psychiatrist's couch. Florheim's delight in naming his characters reminds me of a comment that was made about Constance Garnett, the British translator who introduced the great Russian writers of 19th century to e English-speaking readers. Her achievements were heroic but she has also been accused of creating one great lumpen writer named Tolstoyevsky.

Richard Aberle Florsheim (1916-1979) came from a wealthy Chicago family. After studying from the University of Chicago, Florsheim spent two years abroad (1936-38) where he worked in the atelier of the French post-impressionist painter Emile Bernard and showed his work at the Salon des  Refuses. Returning to Chicago in the summer of 1939, Florsheim rented a studio of his own. There he began making lithographs and had his forst exhibition in 1942.
Images by Richard Florsheim are in the collection of the Art Institute of Chicag:
1.  Welded Steel Xmas Trees
2.  I think it should hang this way.
Posted by Jane Librizzi at 5:20 PM 2 comments: