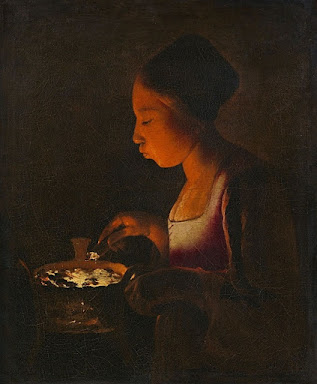 An aspect of preparing food that comes to the fore  during winter holidays is an association with the sacred. Georges de Latour, a French painter of mostly religious subjects, illustrates this in a newly discovered work,  La Fiellette au Braisier.
In this enigmatic painting of a young girl cooking the artist has given us no clues locate the space she inhanits or where the source of the light is; its angle is more like a modern floodlight than anything in a 17th century home.
I can't quite make out what is being cooked but it looks like it could be an omelet; perhaps she is using the implement in he right hand to lift the edge. That could also explain why she is staring so intently into the brazier. or she is just learning to cook. She is all attentiveness as sje works. A fillette is a young girl and we can tell from the lacing on the bodice of her dress.
Known primarily as a painter of religious subjects, Georges  de La Tour imbued everything he painted with a spiritual aspect through his use of striking contrasts of darkness and light.  Latour seems to have been influenced by Dutch Caravaggisti, painters who adopted the technique from the great Italian Caravaggio. It had been around since the Renaissance but Baroque painters seized on it for its heightened intensity, its ability to evoke a sense of awe in the viewer. In Caravaggio's works it created an air of menace that reflected the often violent city that was 16th century Rome.  Indeed, Caravaggio left in a hurry after he murdered a man in 1606. In La Tour's hands chiaroscuro was  about the light that triumphs over darkness.
Georges de Latour (1593-1652) was born in the Diocese of Metz, one of seven children of a baker and his wife. Details of his early life, his travels, or his artistic education are unclear. When Latour married in 1620 he set up a studio in Luneville, then part of the duchy of Lorraine.  From this outpost he managed to attract the patronage of King Louis XIII of France and when Latour moved to Paris in the late 1630s he received commissions from Cardinal Richelieu, Louis' principal minister.
Like Vermeer, with whom he has often been compared, La Tour left behind only a small number of paintings definitively attributed to him (48 at present). Although Latour enjoyed many honors during his lifetime, he was forgotten after death, again like Vermeer, until his paintings were rediscovered in the early 20th century by Herman Voss, a German scholar of Baroque and Renaissance art.  Voss. the director of the Dresden Museum, was  described by those who knew as being ambitious and vacillating and, together, these characteristics may have predicted his turn from liberal opponent of the Nazis to  second director of Hitler's Fuhrermuseum. What attracted Voss to the devout Latour?  Perhaps it was the light.
Image: Georges de La Tour - La Fillette au braisier (Young Girl with a Brazier), oil on canvas, circa 1646-1648, Gallery Lempertz, Cologne
Posted by Jane Librizzi at 1:45 PM 2 comments: 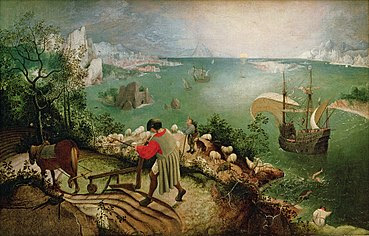 "... the boy a frolic courage caught
To fly at random ..."
-  Metamorphosis by Ovid, translated by Arthur Golding (1567)
It seems that the most famous painting by Pieter Bruegel the Elder was actually made by his son Pieter the Younger after an original that has been lost. Another piece of received wisdom bites the dust.  When Jan Van Eyck's The Arnolfini Wedding (1434) was recently  revealed to be something more like a memento mori of the Tuscan merchant's dead wife (in childbirth?) with his riches, another one became inoperational. These early Netherlandish artists can still mystify us from half a millennium away.
This and more  is the subject of a book Short Life in a s Strange World: Birth to Death in 42 Panels by an Englishman, Toby Ferris. Ferris was 42 when he embarked on a plan to go and see all 42 paintings that have survived by the  Renaissance artist Bruegel the Elder. Nineteen countries and three American cities later he had encountered them all. Interwoven into his art criticism are memories of Ferris's late father, an engineer who died in 2009.  There was scant documentation of the senior Ferris's life, as Toby Ferris would discover about Bruegel's,  all that was left was "only the vivid remnant flesh of the paintings and drawings and engravings."
Ferris organizes the paintings not by date or location but by common themes such as cold, crowds, fires, home. He introduces The Fall of Icarus by recounting how he had once picked up a paraglider who had landed on a grassy hill. Bruegel's world is both familiar and strange.  His paintings contain familiar characters - beggars, bee-keepers, children at play, drunkards, farmers, and census takers; it is from the materials of their world that strangeness emanates. 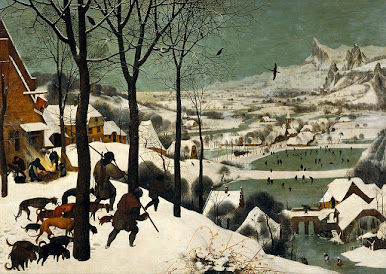 Bruegel is one of the great artists of winter, he lived during a time of hard winters known as the Little Ice Age.  How hard were the winters as portrayed in Hunters in the Snow? Birds dropped out of trees like blocks of ice and in Antwerp the River Scheldt, deep enough to sail an ocean-going ship, froze solidly. Bruegel shows us the hunters returning from what looks like an unproductive hunt, followed by their tired and dejected dogs.  Look up and to their left and you will observe the women preparing to smoke and preserve the family pig, needed now to feed the village through the lean months ahead.  Meanwhile the skaters trace their rounds on rinks cleared on the frozen river.  And because painting is a spatial medium, we marvel at the seeming casualness of Bruegel's choreography, the placement of human and animal figures is never shambolic.
Although he grew up in a peasant family in the commercial Antwerp Breugel's success enabled him to move to the capital  of Brussels where he attracted royal patrons. He died in his mid-forties in 1569, a short life by our measure but prodigious in its output.
The interweaving of personal experience and the experience of encountering a work of art is unique to each person but that hardly makes it irrelevant although some art historians dismiss it as such. Similarly, the New Critics of mid-20th century American poetry decreed  each poem is an island unto itself, not to be contaminated by biograph or history.
The subtitle Short Life in a Strange World notes that Bruegel worked on wood panels rather than the more expensive medium of canvas.  But there were other distinctions to be made. Wood tends to warp as it dries, shrinking and cracking unevenly. Bruegel knew the reasons why northern builders favored oak or walnut over lime or pine.  As he assessed the knots and grains he would have known that unpredictable shifts and alterations that would transform his works after he was gone.
Breigel's  sophisticated use of imprimatura (an undercoating that prepares the panel for the layering of colors) was a souvenir of his time in Italy. He experimented as he went along, creating subtle effects, not easily seen in reproduction. He smudges tacky paint with his fingers, he scraped paint with the pointed end of the brush to simulate the appearance of textured fabrics. And his collection of brushes contained the fur of various small animals with coarse hog bristles for the underpainting.
Toby Ferris is the creator of the website Anatomy of Norbitron,  devoted to "essays on suburban life and universal failure as seen through the lens of Renaissance art" so this, his first book, follows a longstanding  preoccupation.
Short Life in a s Strange World: Birth to Death in 42 Panels by Toby Ferris, New York, HarperCollins: 2020.
Images:
1. after Pieter Bruegel the Elder, probably by Pieter Bruegl the Younger, The Fall of Icarus, oil on panel, circa 1550, Royal Museum of Fine Arts, Brussels.
2. Pieter Bruegel the Elder, Hunters in the Snow, 1565, Kunsthistorisches Museum, Vienna.
Posted by Jane Librizzi at 2:44 PM 2 comments:

The poet Christina Rossetti asked rhetorically "Who has seen the wind?"  Look at Ash Houses, a ceramic ensemble by Chris Rupp, and see the wind made visible through the artist's  imagination. And why not, on a day when a meteor flashed into earth's atmosphere, briefly visible from the CN Tower in Toronto and felt in two countries. According to NASA scientists, it detonated over the upstate New York city where I live.
These little ceramic houses would fit in among the fairy tale forests of the painter Chaim Soutine.  Soutine's signature use of impasto and the resulting compulsive and sinuous rhythms that flowed from his brush created forests of sleepy trees and animated houses that seemed to sway with the wind.
Rupp's Ash Houses is a visual display of the  glazes that can be made with burning vegetation. Ash glazes are made from the remains of organic matter, usually burned wood or straw, For millennia they were the source of glazes used by East Asian potters. Ash glazing  began around 1500 BCE during the Shang Dynasty in Chinas.
Most ash glazes belong to the lime family of ceramic oxides. Usually the ash was mixed with water or clay and applied to the already fired vessel.  The proportions of  various chemicals give  characteristic colors to a glaze. A high proportion of wood ash results in browns and greens, rice straw which is high in silica produces a creamy white glaze, and a very thick glaze of rice husks containing phosphorous results in opalescent blue.
The Russian born Soutine is usually associated with the School of Paris, a group of artists from other countries who came together in Montparnasse in the years before World War I.  Soutine and the others, including Modigliani, were very poor indeed, so poor that when the American collector Albert C. Barnes was shown Soutine's work for the first time and bought sixty Soutine paintings at one go, the artist grabbed the money and ran out into the street where he commandeered a taxi to drive him from Paris to Nice immediately!  Then thanks to the patronage of interior designer Madeleine Castaing, Soutine was saved from a life of penury, allowing him to paint without pressure.  In the estimation of his felow artists, Chaim Soutine was the first among equals.
Christopher Rupp is a California ceramicist and member of the faculty at Westmont College in Santa Barbara.
Image: Chris Rupp - Ash Houses, 2020, ceramic with ash glazes, courtesy of Sullivan Goss: An American Gallery, Santa Barbara.
Posted by Jane Librizzi at 2:04 PM 4 comments: