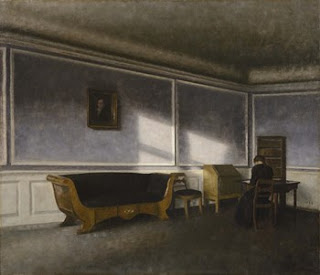 Aslant is good point of view to the Danish artist Vilhelm Hammershoi (1864-1915). Sun slanting obliquely through a window is remarkable in this context because you look around and  notice doors viewed aslant, and even entire rooms. You may not recognize the British Museum from this side view across Montague Street, so much less familiar that the frontal facade. Did Hammershoi choose his London apartment for that view? It is worth pondering. 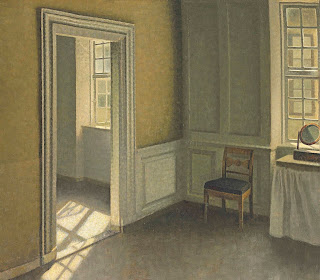 I. Hammershoi was a quiet, diffident person whose paintings have fascinated viewers by their withheld quality; there is something more at work here than arrangements of furniture and architecture.  Ostensibly realistic paintings  vibrate with a tension unique this artist; the frequency of imitations testifies to its power.

II. In trying to explain what is difficult to pin down with words, rumors have run amok.   One  had it that Ida Isted, Hammershoi's wife, suffered from the mental illness that plagued her mother.  From letters Vihelm wrote to his mother, we learn that his concern for Ida's welfare led him to urge  her to marry him as soon as possible to get her away from a perfervid home. Another recurring rumor is that Hammershoi was colorblind because he painted soft colors; in fact, he simply preferred them.  And although Hammershoi enjoyed many travels with Ida during their marriage, being especially fond of the soft quality of the light in London  where they lived for several month in 1906.  Yet the idea persists that he didn't like traveling.

III. The German language poet Rainer Maria Rilke spent several years in Paris, writing a successful monograph on the sculptor Auguste Rodin between 1903 and 1907. He hoped to follow it with a monograph on Hammershoi but it was never completed. Upon visiting Hammershoi in Copenhagen, Rilke found it difficult to converse with the artist..

IV. Researchers at the Hirschsprung collection in Copenhagen have yet to examine and catalog many drawings and letters by Hammershoi, a daunting task as it turns out: the man wrote more than he talked, it seems. The drawings show a precocious talent for drawing - and experiments with bright colors.

V. A dentist who collected Hammershoi's work donated twenty-eight paintings to the Danish State Museum for Art, thinking to secure the artist's place in history but in the 1930s Hammershoi's work went out of style and the museum gave the pictures back.  Too late, they realized their mistake; the damage had done, the paintings had been sold and dispersed. 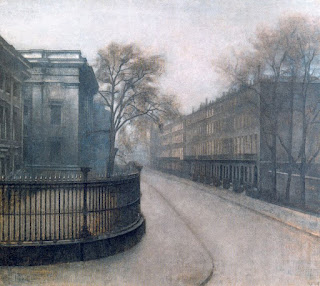 VI. In a bit of serendipity, expatriate American musician Scott Walker, living in England, wrote a song for hs first solo album in 1967 titled Montague Terrace (In Blue); his girlfriend, soon to be wife, was  Mette Teglbjaerg an expatriate Denmark.

VII.  Terence Davies, a British film director acclaimed for atmospheric films, has talked about looking to Hammershoi's interior paintings  for inspiration for his two most recent films:  Sunset Song (2015) based on the novel of the same name by Scottish writer  Lewis Grassic Gibbons and A Quiet Passion (2016) with a script written by Davies, based on the life of Emily Dickinson.

I’ve never seen works of this painter anywhere but on the web. He also painted the mystery of the places, like Khnopff on whom I reread several notes under your lantern.