All Blues: Impressionism or Gentle Realism? 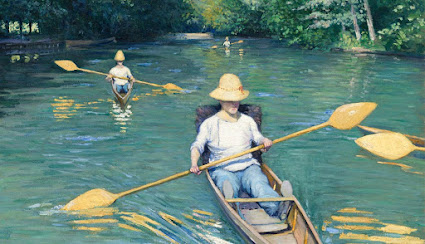 I. When the Russian-born artists Vitaly Komar and Alexander Melamid created their series People's Choice paintings in the 1990s, to no one's surprise, blue was the favorite color in countries around the world. With tongues planted firmly in cheek, the duo had hired a polling firm to conduct the research that resulted in the composite "Most Wanted" and "Least Wanted" paintings. Conceptual art can be hermetic and off-putting but this project was fun.  And it illustrated a truth long known to artists.

Natural ultramarine was for centuries the most prized of all pigments by artists.  Its  only source was lapis lazuli, mined in Afghanistan beginning in the 6th century. Imported to Europe through Venice, it was  valued at five times its weight in gold by Renaissance artists. Yes, there were other blues that became available but each was unsatisfactory in some way.  An experiment gone wrong in an alchemist's  laboratory in the early 18th century resulted in the discovery of Prussian blue, giving hope that other,  better blues could be developed. Watteau used the new pigment and shared it with Fragonard and Boucher and it was used to great effect b Elizabeth Vige-Lebrun. But it was the explosion of industrialization in the 19th century that led to the invention of an inexpensive, synthetic ultramarine used to great effect in Gustave Caillebotte's Skiff on the Yerre, painted in 1877.

II. Gustave Caillebotte (1848-1894) was both a painter and a patron of his fellow Impressionists.  The son of a wealthy textile manufacturer who made a fortune supplying blankets to the French Army, he grew up and made his studio in a large house the Caillebotte's  purchased from none other than Baron Haussmann, architect of Parisian urban renewal.  After serving in the military during the Franco-Prussian War of 1870, Caillebotte enrolled at the Ecole des Beaux  Arts in Paris where he made the acquaintance of Edgar Degas who introduced him to other Impressionist painters.  The young Caillebotte can be seen in Renoir's painting Luncheon of the Boating Party (1881).  He is the one seated at the far right in a white vest and straw boater.

Although he fit in with the circle of Monet, it was the influence of the great realist Gustave Courbet that inspired Caillebotte's  hybrid style, a style that has been called "gentle realism." For Caillebotte, human figures are full of individual personality and are never mere types. His work is also notable for the odd angles that he chose as vantage points in composing his paintings. Like his contemporaries,  Caillebotte had absorbed the spell of japonisme with its heady unconventional juxtapositions of conventional subjects.

Owing to his wealth, Caillebotte felt no pressure to sell his pictures; thus, he had a low public profile.  Modest to a fault, he bequeathed his considerable art collection to the nation but did not include any of his own work. Renoir, who was the executor of his will, eventually arranged to have Caillebotte's paintings hung in the Palais de Luxembourg alongside the artist's personal collection. 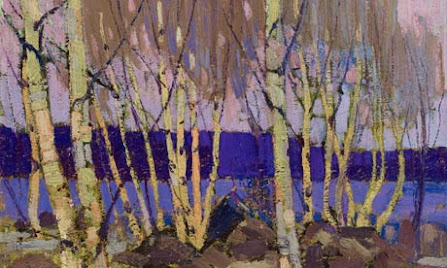 "Because we love bare hills and stunted trees/ we head north when we can,/ past tiaga, tundra, rocky shoreline, ice.

Where does it come from, this sparse taste/ of ours?/ How long/ did we roam this hadrscape, learninng by heart/ all that we used to know:/ turn skin fur side in,/ partner with wolves, eat fat,  hate waste,/ carve spirit, respect the snow,/ build and guard the flame?"

- excerpt from "Improvisation on a first line by Yeats (from Hound Voice)" by Margaret Atwiid, from Dearly: New Poems, New York, Ecco Press: 2020.

Given the similarities in their climates it is hardly surprising that paintings by members of Canada's Group of Seven makes the viewer think of the northern Europeans - Munch, Van Gogh, Arnold Bocklin, or Ferdinand Hodler -  all of them painters from the early 20th century. If there is a significant difference between the Canadians and the Europeans it is that when we look at the Canadians we cannot help but think of the vastness of the prairie in the background of their landscapes.

Trees give the measure of the landscape in Tom Thomson's paintings, their forms give shape and meaning to the surroundings. In the foreground  of Evening, Canoe Lake  trunks of winter birch trees are painted in ochre and gold with bits of tangerine.  Auburn and cobalt, applied horizontally define the rocky shoreline; used vertically these same shades in thin blended strokes define the birches that cling to it. The emphatic purple of the mountain range as viewed through the  scrim of the trees is a Thomson signature. We know this is North America by the bold colors that cold fall nights bring. This idiosyncratic palette is typical of Thomson's work, his control of them is phenomenal.  Despite his very early death, Thomson's influence is apparent in the work of the other painters of the Group of Seven, only established after his passing.

Algonquin Park does not possess conventionally beautiful scenery, with swamps, flooded by beaver dams, and clear-cut pine forests but as part of the geological formation the Pre-Cambrian Shield it did provide a quintessentially Canadian landscape for artists searching for a national identity.

Tom Thomson (1877-1917) was a self-taught artist who worked in Toronto for the design group Grip Ltd.   On his own time he hiked and climbed mountains and painted what he saw.  He soaked up influences from Van Gogh and Cezanne. For Thomson the far reaches of Algonquin Park were his Mont Sainte-Victoire. He painted  pictures from the age of fifteen onward; his need to paint was relentless.  Along with hundreds of oil sketches, Thomson left behind fifty large oil paintings.

The American poet Robert Frost became a friend and mentor to Thomson around the time of the outbreak of the World War.  Thomson had lost his job and was anguished about whether her should, at thirty-seven, enlist in the Army,  becoming "the oldest bald head in the battalion."

Canoe Lake was the place where Thomson entered the park when he disembarked the train from Toronto.  A logging town named for a lake, this was where Thomson loved to canoe and to paint. It was also where he disappeared on a summer night in 1917.  His canoe was seen floating on the lake in the afternoon but  his body was only recovered from the waters eight days later. Thomson was less than a month away from what would have been his twentieth birthday.  The circumstances of his death gave a mythic cast to his reputation in retrospect but to Canadians Thomson remains the quintessential Canadian artist.

Eva Hesse: An Ear In A Pond 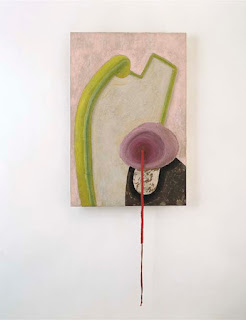 "Don't ask what it means or what it refers to. Don't ask what the work is. See what it does." - Eva Hesse
"If I can name the content, then maybe (...) it's the total absurdity of life." - Eva Hesse, May, 1970
.
Lucy Lippard, art critic and Hesse biographer, called the colors used in An Ear in a Pond "ill-.conceived," but I disagree.  When I first looked at the picture I immediately remembered a gorgeous brushed Lucite necklace my mother bought at Bergdorf Goodman in the late 1960s.  It consisted of cubes, each shaded from chartreuse to cerise (or raspberry pink, if you prefer) with tiny, round pink beads alternating between each cube. There were matching earrings - dangling (! like the red cord in this picture) single cubes on a string of cerise beads.  I wish I knew what happened to them.
When Hesse made An Ear in a Pond  it marked the beginning of her most creative period, five years in which her paintings became increasingly sculptural, a period that ended with her premature death from a brain tumor in 1970 at the age of thirty-four.  It was first exhibited in Germany in August, 1965  where Hesse and her husband Tom Doyle had moved so he could take a position as artist residence. Hesse was unhappy about leaving New York but it did not keep her from working; no amount of turmoil ever did.  An Ear in a Pond is a hybrid, basically a painting but built up into a third dimension with the use of papier mache, especially the pink form of an ear in the lower right section of the picture. Also dangling from the ear is a double string of red wrapped for half its length in cotton cords.  This inventive use of materials is difficult to see in a reproduction.
In retrospect it was a prototype of what was to come. We know from a journal entry that Hesse completed this work on April 27 of that year. On April 14 while she was at work on An Ear in a Pond  her friend Sol Lewitt wrote to Hesse, "You seem the same as always, and being you. hate very minute of it. Don't! Learn to say 'Fuck you' to the world once in a while."
In her journals Hesse called these works "machine drawings," and likened them to "outer space networks." With hindsight, it is painful to read the journals, so full of self-doubt and questioning about the balance to be sought between the intellectual and the emotional, knowing how powerful the works are and how many artists have been influenced by them.
Image: Eva Hesse An Ear in a Pond, 1965, tempura, enamel paint, papier mache, cotton cord on Masonite, Ursula Hauseer collection, Switzerland.
Posted by Jane Librizzi at 2:09 PM 4 comments: