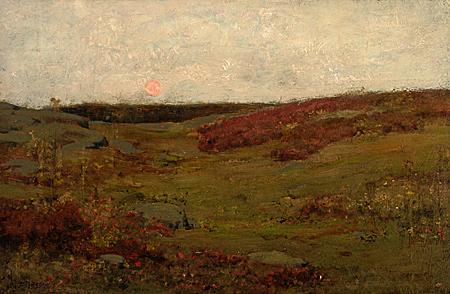 This little beauty, Sunrise-Autumn  by Childe Hassam (1859-1935), is not in a museum but how well it would look paired with one that is - Charles-Francois Daubigny's Fields in the Month of June at the Herbert F. Johnson Museum at Cornell University.  At the time he painted Sunrise-Autumn Hassam  was still a young artist under the influence of the Barbizon School, fresh from his first trip abroad in 1882 and not yet ready to immerse himself in study in Paris at the Academie Julian.  In contrast, the Daubigny comes from the last years of a long, successful career, one that has been curiously overlooked until the recent exhibition Daubigny, Monet, Van Gogh: Impressions of Landscape.

I had never thought much about Daubigny until I saw Fields in the Month of June.  But there it was and I came to relish the times I sat on a bench in front of it, absorbing it or being absorbed into it, the light coming down from a window high above, my own personal floating world of meadows and agriculture, made seamless by the drive to Ithaca through other similar meadows.  It hardly matters whether Hassam painted his meadow in England or the United States, any more than that Daubigny's meadow is French; there is something charming and familiar in this vision of agriculture as human handwriting on the land. 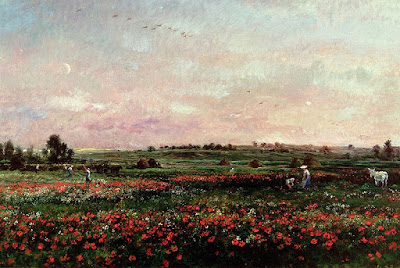 From a family of artists, Charles-Francois Daubigny (1817-1878) had his first lessons at home with his father.   Like Hassam after him, Daubigny apprenticed with an engraver; indeed his first exhibited works were prints.  His attentiveness to landscape was intensified by the year Daubigny spent with his friend Jules Breton aboard Le Botin, a houseboat converted into a movable studio; the two artists floated along the rivers of northern France, the Seine the Marne, and the Oise, on a matchless  peripatetic painting trip.

Without Daubigny, the man who inspired Claude Monet to establish a studio in 1872, the development of Impressionism would have been different.  In his day, Daubigny's landscapes were often dismissed as "mere impressions" for his use of rapid brushstrokes and his preference for capturing fleeting aspects of light. Theophile Gauthier, the author doubling as critic lamented, "His pictures are no more than sketches barely begun."   Understanding backward, the specialty of art historians, we now think of Daubigny and his cohort as being more romantic and less naturalistic  than they did themselves while it is the Impressionists who are considered more objective because of what we have since learned about visual perception.

You can read The Georgics by Virgil, courtesy of MIT.

Agreed Daubigny and his cohort are thought of as being more romantic and less naturalistic while it is the Impressionists who are considered more objective, personal and catching the fleeting world.

I have just written a post on how later artists (1880-1900) adopted impressionism as their own Vs how much they used impressionist skills to create new nationalist art in their own countries. Continuity, adaptation and change!

Funny how some distinctions collapse in the face of art itself. I'm sure you noticed how both Daubigny and Hassam foregrounded reddish vegetation to lead the eye around the canvas. Also, how similar the coloration of the overcast skies. They shared a sense of how landscape looks that we struggle to find words for....but we keep trying. As Calvin Tompkins put it, somebody has to hold the torch. Keep it up!

The impressionistic landscapes keep affecting us particularly, I have still thought of it at the Sisley exhibition (Aix-en-Provence). I know little about Childe Hassam, thank you for this beautiful autumn landscape.
(And for Jane Librizzi by Jerome Witkin !)

Tania, I hope this link works to the Heilbrunn Art Timeline from the Metropolitan Museum.
https://www.metmuseum.org/toah/hd/hass/hd_hass.htm

It has quite a bit of information about Hassam in a succinct format.

Also, a good one from the Smithsonian Museum of American Art. (They have one of my favorite paintings by Hassam "Arques-la-Bataille."