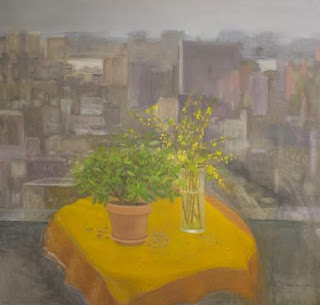 "Light is like oxygen in a painting;  without it a painting is dead. It doesn't breathe. " - Jane Freilicher
As we change our clocks, the effect of seasonal light is on our minds.
Dark Afternoon was painted from Freilicher's lower Manhattan apartment in late autumn. Gray light coming in through the window gives no explanation for the concentrated liveliness of the plants on the yellow tablecloth or its source. It's  focus is on  the light  in retreat.  Freilicher used her  home as her studio. Her still lifes are not posed; they just are. She never strayed far from home, dividing her time between the city and Water Mill, Long Island.
Unlike, say,  artists beginning with  Chardin, Freilicher did not isolate her subjects against a neutral background. This tradition in still life painting began in 17th century Europe. Then in the 19th century the still life began to appear in landscapes.
Freilicher does not seem preoccupied with composition, the resulting effect is one of freshness. Her paintings are filled with specific details but the artist withholds narrative cues.  Rather, she integrates them into a natural backdrop - landscape becomes part of the still life. The two elements remain separate but share a common ambience. Domestic and natural settings have a relaxed relationship as they do in life.  For her objects become events to be regarded with curiosity.
Image; Jane Freilicher - Dark Afternoon, 2001, oil on linen, Munson Williams Proctor Art Institute, Utica
Posted by Jane Librizzi at 5:02 PM 2 comments: 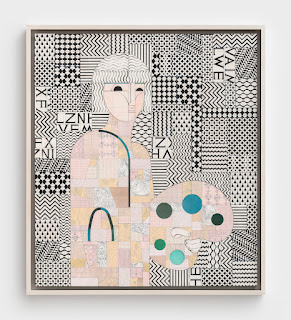 "Let's not shame our eyes for seeing. Instead, thank them for their bravery."
- Joy Harjo, from Conflict Resolution For Holy Beings, W.W. Norton, New York: 2015
The place of the occupational self portrait in the history of painting stretches back more than five centuries. Catharina van Hemessen at her easel, painted in 1548, may be the first self portrait by an artist.  A painter of the Flemish Renaissance, van Hemessen was born in Antwerp
Ruby Sky Stiler joins the estimable company of such painters as Judith Leyster, Sofonisba Anguissola, and Elisabeth Vigge le  brun. Self Portrait with Blue Palette demonstrates the artist's familiarity with both ancient and modern techniques, making for a stimulating blend of Native American pottery  and weaving with flattening elements borrowed from cubism. I even detect  hints of the black and white chairs designed by Koloman Moser  for the Purkersdorf Sanitorium in 1903. You can have fun with Ruby Sky Stiler's work, spotting various combinations of elements.
Born in Portland, Maine in 1979 Ruby Sky Stiler studied art at the Rhode Island School of Design and the School of Art at Yale University.  She lives in New York City.
November is Native American Heritage Month.
For further reading:
Everything You Think you Know About Indians Is Wrong by Paul Chait Smith University of Minnesota Press, Minneapolis: 2009
We Had A Little Real Estate Problem by Klipf Nesteroff, Simon & Schuster, New York: 2021.
Image: Ruby Sky Stiler -  Self Portrait with Blue Palette - 2018, acrylic paint, acrylic resin, paper, glue, graphite on panel, Nicelle Beauchene Gallery, NYC.
Posted by Jane Librizzi at 11:32 AM 2 comments: