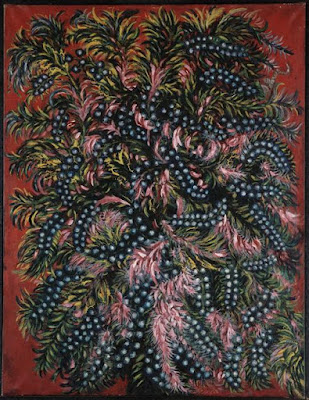 "I realized that if, subsequently, I encouraged Seraphine de Senlis, it was not for the primitive or surrealist character of he paintings but because she belonged to the great immortals who go beyond the framework of a movement or a school." - Wilhelm Uhde
Who is this French woman whose still life paintings are so distinctive? Flowers that shine like stars,  a potpourri of realistic elements and ornamental fancies. Whatever the blue and white spotted flowers in this still life are meant to represent, they are an inspired touch.  Perhaps, like Seraphine's other paintings, they were inspired by the stained glass windows in the local cathedral. Most include a section in the lower quarter of a different order from the rest of the picture, an area where herbs or darker leaves suggest the subterranean. Seraphine's arrangements are often unexpected, not carefully arranged floral displays so much as maps of a labyrinthine thought process composed with paint brush in hand. That said,  I am not suggesting that her method was like automatic writing.
Seraphine Louis (1864-1942) lived a life permeated by sadness while painting images filled with joy and beauty.. Despite innumerable hardships, she taught herself to paint, finding inspiration in her Catholic faith. Seraphine mixed her own colors, mixing Ripolin, the first commercially available enamel paint, and whitewash. When finances allowed, she switched to  using varnish. Her first paintings were made on wood in 1906 and usually have a matte appearance.  Remarkably, this completely self-taught artist left works that present few conservation issues.  She began each painting by engraving her signature with a knife.
Painted by candlelight in the evenings after the work day was done, her work was known only to to small circle until, in 1912, a German collector, Wilhelm Uhde first saw her work.  Uhde was an  early supporter of Pablo Picasso and Henri Rousseau so his encouragement and support of  Seraphine's work is the reason that we know her work. Forced to return to Germany by the outbreak of WWI Uhde was delighted to reconnect with Seraphine in 1927.  An exhibition he sponsored brought financial success to Seraphine for the first time in her life but it was to be short-lived.  The Depression intervened and Seraphine's emotional state, always fragile, collapsed into mental illness. Confined to an asylum in 1932, she lived there  until her death ten years later
Seraphine Louis had been orphaned at age seven; her mother died on Seraphine's first birthday, followed by her father six years later.  The young girl worked as a shepherdess and then as a domestic for an order of nuns at the convent of the Charity of Providence in Clermont-sur-Oise (1882-1902). Later she found work for local families in nearby Senlis and it was there that she began to paint and found a sponsor.
Like her contemporary Camille Claudel, Seraphine died of hunger while  in a hospital under German occupation.  Her medical file at the Senlis hospital noted that she "picks grass to eat at night and also eats garbage."  Seraphine suffered from breast cancer as well as psychosis.  She died alone and friendless, buoyed, one hopes, by a strong religious faith that had led her to art.

Paintings by Seraphine Louis are in the collections of the Musee Maillol in Paris and the Charlotte-Zander Museum in Bonningheim, Germany.  There is a gallery at the Centre Pompidou in Parris where her works are displayed alongside those of Henri Rousseau, challenging the modernistic dogma that belittles such art as exotic or primitive.
Image: Seraphine Louis - Fleurs (Flowers), circa 1927, oil on panel, Museum of Art & Archaeology, Senlis, France.
Posted by Jane Librizzi at 2:44 PM