Three Women And The Artists Who Painted Them

How unusual to find these particular artists grouped together but the three paintings form an improbable but satisfying triptych.  From left to right John Singer Sargent's Javanese Dancer, Jules Pascin's Woman In A Pink Dress and William-Adolphe Bouguereau's Madonna and Child.  The space now occupied by two of them has long been  taken up by a very large landscape - Fields In The Month of June  (Les champs au mois de juin, 1874,) by Charles-Francois Daubigny). Someone with an  eye for color connected the thread of reddish pink and pinkish red and the blue-green from the Bouguereau to the pictures brought out of storage.
As I approached them the other day  I was delighted to see a bench positioned before them because a glance around the gallery that I have visited many times at the Johnson Museum at Cornell University persuaded me that this was what I had come to see.
The three choices available to women  a century and more ago, I thought: madonna (Bouguereai), whore (Pascin) and performer (Sargent).  The last one freer than the other two but morally equivocal, caught in a sexual demilitarized zone, so to speak.
Three variations on the use of oil painting, too.  Bouguereau made his canvas disappear, creating an illusion that the air between the viewer and the painting is pure, free of dust motes.  Pascin's use of grey hues with his colors may indicate the air in a room where cigarettes were smoked, an indication that the woman is a prostitute, as his sitters often were.  He also used the weave of the canvas part of his painting, a different relationship between the artist and the viewer than the one Academic artists like Bouguereau aspired to.  A fitting choice for a subject (probably Lucy Krog) who has few illusions of her own.
Bougeureau, the painter most concerned to achieve a recognizable realism, created the picture least connected to reality. Mary and Jesus sit, the infant already bestowing a blessing on a little disciple.  The devotional imagery of the Italian Renaissance has morphed into a 19th century French drawing room.
Javanese Dancer is the finest of Sargent's attempts at this particular subject, posed to be sure but  conveying a sense of dance as movement.  Her sash as she swings it from her chartreuse shadowed right arm (what a color) and the diagonals of her skirt pull on the viewer's eye.   At the same time the formality of the gesture of her left arm, not to mention the ceremonial dagger she wears suggest self-possession, perhaps a denial of the Western assumption of the sexual availability of female performers in Sargent's time.  Sargent worked his colors into the canvas with a zest that makes me think this was a bus-man's holiday from all those delicate watercolors he did.
As I sat there, I could see out of the corner of my eye, Otto Dix's Woman Reclining On A Leopard Skin (1927), both of them ready to confront the culture represented by my chosen paintings.  But that experience belongs to another day. 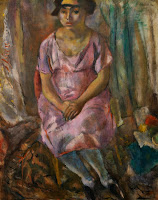 And now some notes on the painters.  According to those who knew John Singer Sargent (1856-1925) his musical talent was equal to artistic gifts so his numerous studies and finished works of dancers come as no surprise.  Although he lived and worked through the days of Impressionism, Expressionism, fauvism, and Cubism, he remained committed to his own realistic style.  There has never been a critical consensus regarding Sargent's work, to put it mildly.  It is as though his masterly renderings of beautiful women and powerful men might compel us to admit that we are in thrall to them as much as Sargent was.

Jules Pascin (1885-1930), the least well-known of the these three painters,  was born in Bulgaria to Italian-Serbian and Spanish-Jewish parents. He attended art school in Munich but moved to the United States to avoid the draft during World War I.  Paris was the place that he loved and he returned there in 1920.   An excess of debauchery led to his suicide by hanging.  He applied his excellent draftsmanship to his many studies of women; his models were often prostitutes. 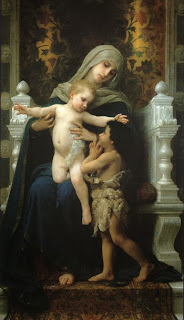 William-Adolphe Bouguereau (1825-1905) was a French painter of a much more conventional type, although he was represented on this site recently  by Nymphs & Satyr.  To the Impressionists, who despised him, Bouguereau represented everything that was wrong with official art.  Think of someone today daring to sneer at the results of an art auction at Christies and you will get the idea of how large Bouguereau's reputation was at one time.  In recent decades, thanks to renewed interest in figurative painting, Bouguereau has been rediscovered by a new generation.  With over 800 paintings to his credit, many of them in major museums, he could hardly avoid a comeback.

Note: I have tried to reproduce these three paintings at their relative sizes to give readers as good a sense of the experience in the gallery as possible.

Thank you. I have always loved Pascin. Despite being young and missing home dreadfully, or perhaps because of it, he became a central figure in the social life of Montparnasse's cafés and studios.

Yes, Pascin was empathetic to his sitters, wasn't he? If he had not been, "The Woman In Pink" would not have looked as well as it did next to Bougeureau's Madonna.