Luxe, calme et volupte.  Luxury, calm, an voluptuousness are the characteristics we associate with the French artist Raoul Dufy (1877-1953). Although Dufy worked in ceramics and textiles he is best known - and loved - for his later paintings with their foreshortened perspectives, suggestive shapes, and thin washes of color quickly applied, resulting in a style dubbed 'stenographic painting."

Born in Le Havre on the Pas de Calais, Dufy took refuge in the Midi during the Nazi Occupation. Driven out of his home at Saint-Denis-sur-Sarthon by the invading Germans in early 1940, he settled in unoccupied southern France.  Already suffering from the rheumatoid arthritis that eventually led to his death, the artist coped by strapping the paintbrush to his hand so as to continue working.  "The period of my illness and the cataclysms of the world should not be apparent in my ... work," he said and they are not.

The  farms, farmyards, and granaries and granaries of the little village of Lestelle are the subject of numerous paintings and sketches from the late 1940s. Spare little pictures painted with an economy of means portray the rhythms of a rustic life.

Unlike Jean-Francois Millet's humbly religious peasants, Dufy's farmers are an altogether more pantheistic lot.  Around a table before a granary, a trumpeter and an accordionist entertain their mates on a break from haying. A table is there an the effect is so perfect that we do not question its being there. In the background a farmhand is working atop a combine.  A summer storm cloud passes casually by, only temporarily quelling the golden dust that rises from the threshing. machine.

In Musicians In The Country  the chromatic intensity of golds alternates with swaths of verdant green.  The horizontal lines impart a sense of calm to the scene. An intensely blue stream leads  up at right   to a scalloped aqueduct, a survivor of Roman times, reminding us of Virgil's Georgics, a manual of agricultural things that Dufy's near contemporary Aristide Maillol illustrated in a series of prints and drawings between 1937-1944. Perhaps both sought comfort in seeming eternal verities and who could blame them. 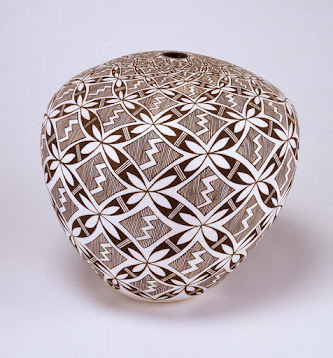 Bolts of lightning zigzag toward earth against a backdrop of driving rains. These are, in turn, overlaid by a crisscrossing  network of leaves and flowers.  The lines are so sharp and precise because they are traced with the pointed end of a yucca plant. This is an art of the southwestern desert and its indigenous peoples, an art that celebrates a precious and scarce resource - water.
After incising designs in the clay the potter would tap the pot; if its thin sturdy walls did not ring when held to the ear that indicated that the pot would crack in firing and was defective. Eventually  after wood firing was completed, seed would be stored in the pot until needed for planting. Then the seed pot would be broken and the shards could be reused to make more pots.
The same clay that made seed pots made pots to carry precious water home from nearby streams.  The same clay was used to build the pueblo towns of the southwest. Dried clay is given additional strength through the incorporation of potsherds. Geometric patterns seem suited to the harsh light of the desert, sharply defined. Fire is implicit in the dry lands, waiting only to be tapped.  Pottery is the art form and the tool maker ready to hand.
Maria Zieu Chino (1907-1982) was born at Acoma Pueblo in northwestern New Mexico. The making of pottery there dates back more than a millennium. She won the first award  for her pottery when she was fifteen years old at the Santa Fe Indian Fair in 1922. Together with her friends Jessica Garcia, Juana Leo, and  Lucy M. Lewis, the quartet became known as the "Four Matriarchs" of Acoma pottery for their revival of an ancient art, beginning in the 1950s.  While gathering potsherds to temper their vessels the women unearthed pieces with long unseen designs, becoming archeologists in service to  their own ancestors. Yet Chino was no mere copyist; she adapted traditional motifs to her own ends, achieving results that were fresh and compelling. Among her peers, Chin's work is admired for the fitness between its form and decoration.
Robert Patricio is the nephew of Maria Zieu Chin.
Image: Maria Zieu Chino - Seed Jar,  1982, clay, National Museum of Women in the Arts, Washington, DC.
Posted by Jane Librizzi at 2:57 PM 2 comments:

Watching For Summer With Edie Harper 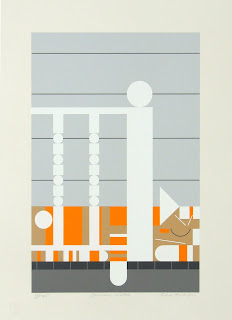 A white clapboard house with a swing on the porch.  Just a few colors, with a sunny yellow that suggests the title of this serigraph - Summer Watch.  And if you follow the white paw hanging down over the edge o the porch and turn right you will see a sleeping cat with a smile on its face. Like Lewis Carroll's Cheshire Cat, Harper's cat slips in and out off view.
Harper was a prodigious experimenter in media.  Beyond photography, she excelled in painting and lithography.   Not content with two dimensions, she made pottery, sculpture, and jewelry, too.  For Harper eploring each new technology must have been thrilling.
Except for a ix month cross country honeymoon with her husband, Edie McKee Harper (1922-2010 never strayed far from her Midwestern roots.  She was born in Kansas City, Kansas and settled in Cincinnati, Ohio, after studying at the Art Academy there.  During World War II she worked as a photographer for the Army Corps of Engineers.
Edie Harper - Summer Watch, serigraph (silkscreen) on paper, Springfield Museum of Art, Springfield, OH.
Posted by Jane Librizzi at 3:36 PM 5 comments: 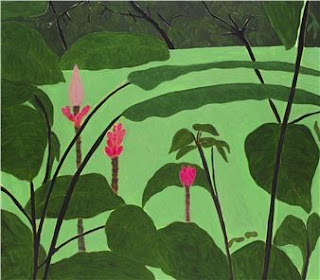 From Gertrudes Altschul, a German immigrant to Patricia Leite, a living Brazilian artist (this site last week) images of nature in art. 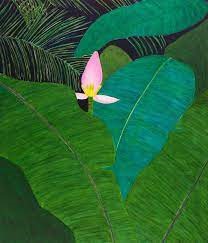 These paintings shown here are from a series on the Barra do Una, a beach on the Brazilian coast near Sao Paolo, a region that is home to an abundance of biodiverse flora and fauna and rivers and waterfalls along with the littoral.  They are at once a celebration and a reminder of this fragile ecosystem   In recent years there has been profound  damage to its environment through the Barra's growing number of visitors and  the detritus they discard as well as that which washes ashore.

Patricia Leite was born in 1955 in Belo Horizonte, a large city in southern Brazil, and now lives in Sao Paolo, the nation's largest city.  It would seem t academic argument to debate where figuration in her work ends and abstraction begins because blending is seamless. She often works on wooden panels, the better to layer her pigments.   striking contrasts of color 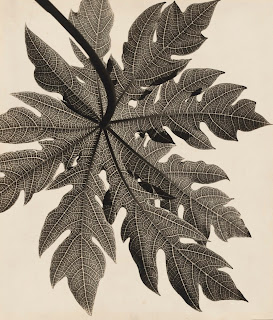 "(F)or women, whether artists or writers ... the conditions of exile have especially ambiguous or even ambivalent implications." - Linda Nochlin
That Gertrudes Altschul (1904-1962) would become an internationally famous photographer came about because of what Linda Nochlin called "conditions of exile."
Altschul and her husband Leon were Jewish. When  Leon was forced to sell his hat-making business in 1939 under increasing anti-Semitic legislation by the Nazi regime, the couple left Berlin in haste and piecemeal,  evacuating their son Ernst to relatives in Great Britain, the parents arriving separately in Sao Paolo, Brazil. Finally, in 1941 the family were reunited with their son.  Another version of this story of families being buffeted by World War II is Lore Segal's 1964 affecting fictionalized memoir Other People's Houses.
As in the United States, the many professional people who emigrated from Germany constituted a critical mass that influenced the art scene in Sao Paulo. In photography, to name one medium, Brazilians  began to move away from pictorialism and toward experimental modernist methods that often highlighted form and geometry.
Gertrudes Altshul  found work making artificial flowers; as part of her new life,  Altschul began photographing and joined the Foto Cline Club in 1952. Her ambitious experiments rivaled those of any make photographer.  She aimed to create images that  could resonate  universally  As subjects she frequently chose stairs, ladders, and construction materials. Filigree represents another of Altshcul's continuing interests, botanical subjects. Soon Altschul earned an international reputation for her work.During the 1950s, club members won prizes on six continents.  Though her pphotogrpahic career was short, it was memorable.
With Filigree Altschul has used the camera to convey an intimate relationship; without wanting to overstate my claim, I see it as a portrait.  This leaf is like no other.
The Foto Cine Club Bandeirante was a group of inventive amateur photographers that began in Sao Paulo in 1939. Unusually for the time, the club specifically encouraged women to become members. In These were no ordinary hobbyists. Their photo salons won admiration around the world for originality,  They launched a magazine Boletim foto-cine that appeared on a quixotic schedule and was free to  members and for sale to the public. The magazine fostered an esprit de corps by including information about members' doing,: birthdays, weddings, and club excursions.  Those club excursions were joint learning experiences in the field. There was even an annual visit from Santa Claus.
.
Image: Gertrudes Altschul  - Filigree, 1953, gelatin silver print, Estate of Gertrudes Altshcul
Posted by Jane Librizzi at 12:06 PM 5 comments: