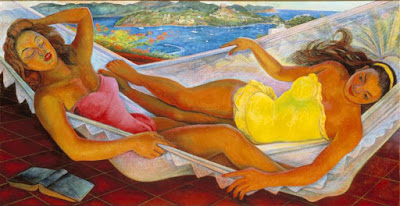 A perfect picture of summer? Maybe, but then it is always summer-like in Acapulco. Still a vacation is welcome at any time of year: sunshine, ocean breezes, a hammock, a good book, and a good friend.  There are red flowers peaking up over the edge of the hammock and white boat sails, tiny dabs of white paint in the cerulean blue of the Pacific seems to have leached all the blue out of the sky, what little of it is visible here. Sunlight warms the women's skins; though the effect of  sunlight is everywhere, there is no shade, except in some contouring on the arms and legs of the sun bathers.  This painting is a joyous demonstration of the primary colors  from an artist known his his love of vivid color.

Diego Rivera painted La Hamaca (The Hammock) in 1955, just two years before his death.  Rivera had created a large number of public murals so he was experienced at working on a large scale. La Hamaca is large:  6'7" by 3'5" so he portrayed these figures at life size.

One of the two young women in La Hamaca is the daughter of  Delores Olmedo. Olmedo was a woman of parts, successful in business, a musician, and a philanthropist.  Together, these attributes made her a beneficent friend to artists Frida Kahlo and Diego Rivera.  In 1994 she converted a building she owned in Mexico City into a museum (Museo Delores Olmedo) to which she donated her extensive collection of art, including the largest assemblage of worjs by Kahlo and Rivera anywhere.

The 19th century bathing dress or pantaloons, was followed by the one piece suit called a maillot (see the painting above), and the bikini, introduced by Louis Reard in 1946. Popularized by movie star Brigitte Bardot and Sophie Loren, the Snow White and Rose Red of the bikini.  And then there is the ceremonial "unveiling" of the suit. The vaudeville star Annette Kellernmann, known as the "Australian Mermaid" was arrested on Revere Beach in Massachusetts in 1907 when she appeared wearing a on piece suit.
Whether it reveals or conceals, the bathing suit is a true anatomical bomb.

I didn't admire Diego Rivera's behaviour with his wife and particularly with other women. But he certainly understood the females in his paintings. The two young women in The Hammock would have been delighted with the way they were depicted - great figures, sexy positions, modern clothes *sighs happily*.

Hels, Rivera was better as an artist than as a person. At least he was smart enough to marry accomplished artists.

I did not know this painting, which makes dream in this period too little smiling. Thank you, Jane.

Tania, the women look like mermaids washed up on shore by the sea. I love the colors in this one.