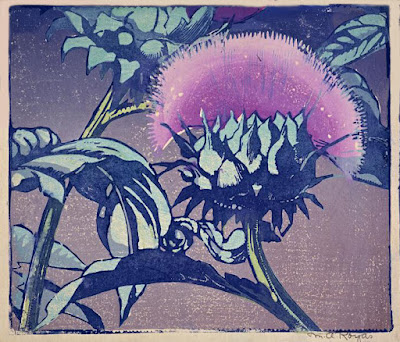 I have learned something just now. Thank you, Jane!

Cumin ... this ingredient is rolling through my brewing mind these days. Those ancient Romans!

Rouchswalwe, I know that lots of people dip artichokes in butter but - to me - that disguises the flavor rather than brings it out. Let me know what you think after you try it that way. You have a discerning palate, I've noticed.

Will do, Jane. I like artichoke on pizza, too.

Jane! I've mixed local honey with 2 parts honey, 1 part vinegar, and toasted cumin from Holland. Then drizzled it over roasted artichoke. (I'm not certain whether this follows the ancient Roman recipe; however, I found it quite delicious!) Thank you for giving the idea!!

Rouchswalwe, I think we can safely call this an Italian recipe - an early Italian recipe. I've tried the combination myself. I don't see why it wouldn't work for any way that on could prepare an artichoke or, for that matter, an artichoke heart. Bon appetite!

And the Greeks before them! Think of Priapus, the minor rural deity of male generativity.