Eline Vere: A Novel Of The Hague

"Every human being is a sacrifice.' - Hendrik Ibsen 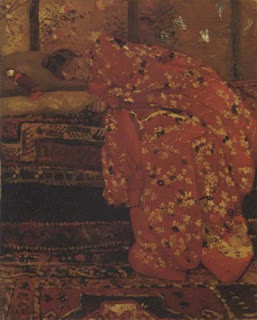 Eline Vere by Louis Couperus has often been compared to Tolstoy's Anna Karenina (1878), as though great novels with female protagonists are so odd as to require a segregated genre.  More apt comparisons with Kate Chopin's The Awakening (1899), rescued from oblivion by feminist scholars or Maurice Guest (1908)  by Henry Handel Richardson another brilliant first novel of obsession that still languishes.  Both were written by women, which only highlights  Couperus's  ability to create fully realized female characters.  His understanding of the experience of emotional turmoil, often dismissed as neurasthenia in women, remains exemplary.
A capacious novel, Eline Vere is like Tolstoy's great novels in presenting a large cast of characters, each one fully developed with a place in the story that only makes Eline's tragedy the more poignant.  Frederique, also twenty-three, is able to reconcile her inner turmoil with her need to connect with others. While Eline, with a loving family, admiring friends, and numerous suitors, remains isolated within herself, unruly egotism  her only avenue of expression.   She rejects both Otto and St. Clare as alien, and mistakes Victor's similarities for genuine feeling. 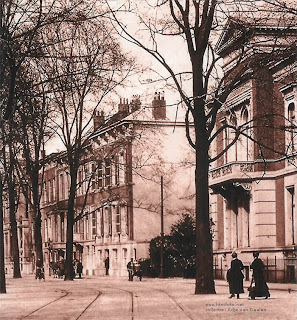 In  the late 19th century northwestern Europe enjoyed a balance of prosperity and stability by comparison with  more volative neighbors France and Great Britiain.  Yet this equilibrium often felt like stasis to those who lived it.  What could be more suggestive then, than the novel's first chapter that introduces the cast of main characters as they prepare to present  tableaux vivant at a party?  This theatrical entertainment, gone like the parlor piano,  was once a popular excuse to get into costume and get up make believe scenes from history, mythology, or imitate famous paintings.  Significantly, Eline Vere is absent from the festivities.

Eline Vere's imaginative capabilities are alive to the darker dimensions of life, alienating her from her enviably comfortable existence. After an argument with her sister Betsey and beloved brother-in-law Henk with whom she lives, Eline find refuge with a former schoolmate, Jeanne, who lives with husband and children in more precarious circumstances. Eline and Freddie, by contrast, lead such circumscribed lives that, in their twenties they remain trapped in adolescence like insects in amber.  A paradox, still timely, is that creature comforts make freedom of action possible, but attenuated hunger and self-wasting are just as possible outcomes.
The novel feels much less dated than you might imagine.  Theories of hereditary influence have been drastically overhauled from those Couperus drew on, but we still recognize its formative influence on temperament.  In the relationship  between Eline and her cousin Vincent, Couperus prefigures Carl Jung's theory of personality.  When Vincent  suggests that one can easily live a life based on one's own free will, Eline responds with passion: "But being independent, doing eaxctly as you please...that takes more moral courage than most of us possess." 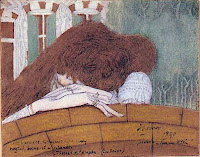 Eline's capabilities count for so little that the reader could easily miss them.  She is fluent in French and English,  her musicality, playing piano and singing,  brings great pleasure to those around her but ends in an obsession with a second rate opera singer.   Her avid interest in the  workings of the mind brings her no peace or resolution.   She breaks off her engagement to Otto van Erlsvooert, a kind, loving man because she cannot imagine the emotional equilibrium needed to sustain love.
One of the great Dutch writers, Louis Couperus (1863-1923) was the youngest of  eleven children of  a councilor to the Netherlands High Courts.  When Louis was nine, the family was posted to the Dutch East Indies for six years. Back in The Hague, his first poem was published in 1883, and in January of 1887, Couperus's first novel Eline Verve began a year long serialization in the newspaper.  After it was published in book form to immediate acclaim, Couperus spent a year in Paris (1890), returning to marry his childhood sweetheart, Elisabeth Baud, in September, 1891.

Couperus's versatility is  impressive, ranging from psychological, mythological and historical novels to fairy-tales and journalism. An admirer of Hendrik Ibsen's plays, Couperus was ffundamentally pessimistic, his themes work themselves out fictionally on many levels, individual, cultural, political. The internal workings of individual temperament struggle wirh  mysterious and incomprehensible forces of fate.  In counterpoint, a strong
aesthetic sense asserts itself in the consoling power of beauty.

The Couperus revival in English comes by way of Pushkin Press, U.K., which publishes Eline Vere along with Inevitable and Psyche.  In the United States, Archipelago Press of Brooklyn is the publisher of Eline Vere, translated impressively by Ina Rilke, also known for her translation of Sijie Dai's Balzac And the Little Chinese Seamstress. 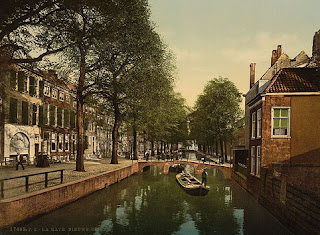