How To Be Lazy - Even in Translation 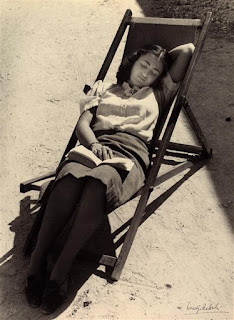 "I could have a job, but I'm too lazy to choose it;


Neil Philip of Idbury Prints comments: "This is great, isn't it? The translation is by Arthur Waley, though the last line has been altered, to its detriment. Waley's line reads as follows, with the "he" in italics which I can't do:

So even he was not so lazy as I.

Hsi Shu-yeh is the Taoist poet Hsi K'ang (223-262 C.E.). No doubt the transliteration of all these names has changed since Waley's day. "

And I replied:  "The editor of the anthology didn't include any source credits, but I was so taken with the poem that I hoped the spirit of Po Chu-I wouldn't mind."

Image: Vincinzo Balocchi  - Young Girl Sleeping In A Chaise Lounge, 1960, Museum of the Story of Photography, Florence.
Posted by Jane Librizzi at 8:39 AM

Ah, prost to those Taoists!

I prefer a bit more of an active sort of Taoism, if that's even a thing.

Rouchswalwe, as Neil Philip points out, the translator was too lazy to get it right! Delicious, no?