"The boat pulls up its tether, shifts its body from one foot to the other, restless and stubborn as a colt.
It is however only a rather  crude receptacle, a wooden spoon without a handle: but, dug out and arched to permit a pilot direction, it seems to have a mind of its own, like a hand signaling cosi-cosa.
Mounted, it adopts a passive attitude, slips gently away, is easy to guide. If it kicks up, it has good reasons.
Left alone, it follows the current and goes, like everything in the world, to its destruction like a straw."
- "The Boat" by Francis Ponge 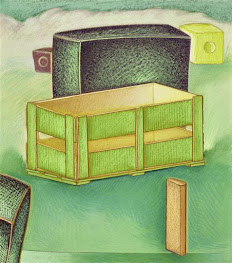 "Midway between cage and "cachot" (prison) the French language has "Cageot" (crate), a simple small openwork box given over to the transporter of fruits that out of the least suffocation make (you can be sure)  a malady.
Arranged in a way that at the end of its usefulness it could be broken effortlessly, it does not serve twice. So it lasts less than the melting of clouded produce it encloses.
At all the street corners that converge upon the marketplace, it gleams then with the unpretentious luster of white wood. Brand new still, and slightly dumbfounded at being in an awkward pose tossed on the garbage heap beyond return, this object is in sum amongst the most sympathetic, - upon whose fate it is better not to dwell lengthily."
- "Le Cageot/ the crate" by Francis Ponge
Babillage is a term coined by Cid Corman to describe the delights of  the poetry of Francis Ponge.  Corman, poet and translator of  Ponge, has described the Frenchman as "the willing spokesman" for the objects he write about. Ponge has been called "the poet of things" for his relation with the world of mute things. His prose poems seem to meander as his imagination takes him but this is a hard won illusion; Ponge is surgically precise in his choice of words.
So what makes a poem a prose poem? Basically,  a poem written without line breaks;  although you could object that all prose is broken up by line breaks but, with most prose, the reader ignores those line breaks as though they weren't there. The first lyrics written in prose form were in  Paris Spleen (1869) by Charles Baudelaire; his influence on Arthur Rimbaud and Stephane Mallarrme should not be underestimated.  So the origins of the prose poem are French. In the Surrealist Manifesto (1924), Andre Breton credited several prose poets with inspiring the surrealists.
The long-lived Francis Ponge (1899-1988) was himself influenced by Paul Valery, he learned from the surrealists, his work found favor with the postwar existentialists who appreciated what they saw as his phenomenological poetry, and he was then rediscovered by a new generation of writers who found his "scientific" use of language a poetic equivalent of structural anthropology.  When Ponge was good his work revealed new aspects of overlooked things but some of his work has aged badly.  His takes on then contemporary technology such as "The Radio," "The Stoves," and "The Telephone" do not align with our experiences and others (I'm thinking  here of "Young Girl") reduce a human being to appraisable body parts.
Translations from the French are by Cid Corman, from Things by Francis Ponge, New York, A Mushinsha Book, Grossman Publishers: 1970
Images:oi on canvas, Musee des Beaux-Arts, Valencienes.
1. Pierre Bisiaux - Les Barques (The Boats),
2. Barabtre a/k/a Francois Aubin  - Still Life with Crate  1979, pastel drawing, Pompidou Center, Paris
Posted by Jane Librizzi at 10:11 AM

Tania, Ponge has influenced many American poets but I'm not sure that most American readers know his work. I only know from studying French literature at university.