When I first saw Michale Schuyt's photograph of the Jantar Mantar, a celestial observatory built at Jaipur, India in the 18th century, I was reminded of Georgia O'Keefe's Ladder To The Moon.  With its seemingly random placement of stone stairways  the observatory looked like a collection of movable gateways waiting for the planes to land.  It looked surreal, rather than what it was, the embodiment of scientifically calculated star-watching posts.   In fact, stairways to the stars 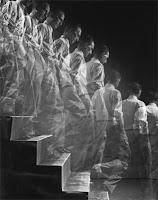 When Karl Marx wrote "everything that is solid melts into air"  he wasn't thinking  about stairs but he could have been.  A stairway is a structure built to solve the problem of ascending and descending in space, something the human body is not well equipped to do.  I think of Marcel Duchamp's scandalous 1913 painting Nude Descending A Staircase and then its 1952 recreation by the photographer Eliot Elisofon.  Once you get past the initial recognition of the joke, you notice how awkward the real moving person appears. 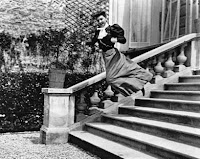 In terms of physics, a staircase is a lever or a treadmill. that multiplies energy.   While Superman can leap tall buildings in a single leap, the rest of us can only reach such heights with a sustained expenditure of energy.  The aunt of Frenchman Jacques-Henri Lartigue seems to have mastered the "leap" decades before Superman.

Oskar Schlemmer's Bauhaus Stairway  displays the co-ordinate geometry of Descartes in action.  Just as the mathematics of multiple variables is encapsulated in Giacomo Barozzi da Vignola's design  of a stairway with a curvilinear sluice way running down its center. at Villa Lante in Bagnaia.  The effortless cascading water is a contrast with the energy required to walk up the stairs.

When the gestalt psychologist Wolfgang Kohler wanted to measure the intelligence of chimpanzees during World War I, he built a staircase.  Then he placed a bunch of bananas at the top and waited to see what the chimps would do.

According to Aristotle, the stairway represented the divine order of the universe.  In their metaphysical ambition to link heaven and earth, the early Mesopotamians melded the stairway and the spiral when they created their legendary ziggurat. The  double helix staircase at Chateau de Chambord,  its design attributed to Leonardo da Vinci, is a puzzle ( how can you see another person on the stairs but not meet them face to face?).

Clerics and all manner of royal personages have deployed stairways in  grandiose ceremonies and  buildings.  The same impulse appears in modern popular songs with such titles as Stairway To The Stars, Stairway To Paradise, and Stairway To Heaven.   Aspects of worship or pilgrimage are often associated with climbing, as in a Jacob's Ladder.

A stairway implies the magic and mystery of the transitory,  the idea of ascending toward the invisible with all its attendant symbolism.  A spiral or helix stairway could be energy frozen in time and space, like freezing water.  The seven white stairs and the seven millstones of Sevres combine layers of symbolism in marmoreal tranquility.

A neglected stairway is a melancholy sight, its disrepair suggesting better times have gone by.  Moss sets into the cracks as ivy curls around the trees in Valenciennes's  watercolor.  Even the light seems to be in retreat. 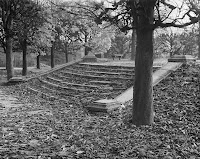 A century after Valenicennes, a grand staircase at Parc de Sceaux near Paris, as photographed by the recent immigrant Andre Kertesz, is the image of desertion.  No footsteps have disturbed the wind-blown leaves from their resting places, no broom or rake has tidied them.  A stairway, and a grand one at that, it commands respect for human ingenuity as it reminds us of the flux at the heart of existence.