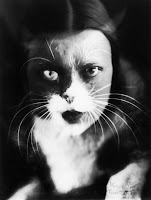 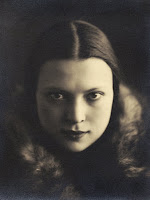 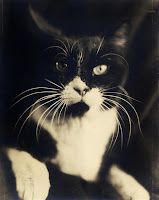 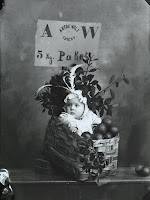 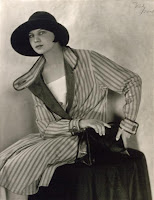 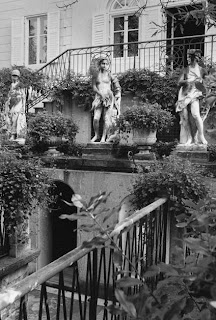 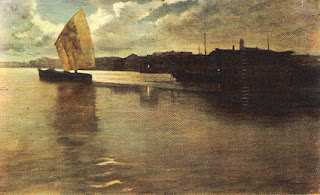 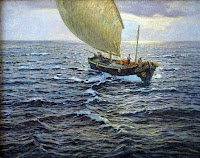 thankyou for all of this wonderful info.

Dear Jane,
Thank you so very much for this informative and, as always, beautifully written article. I have adored The Catwoman for a very long time, but had not been able to uncover any information about it! Such a beautifully mysterious piece!!

Wishing you a wonderful day,

Arresting. Your words take us on a journey. A welcome journey at this time of year when darkness falls earlier and thoughts crowd the heart. Thank you, Jane!

Gerry, thank you. Dictionary in hand and online translator at the ready, it took a while to learn about Wanda. One source in English mis-identified Carlo as Wanda's brother. That didn't make sense to me, so I started digging.

Gossamer Tearoom, I shared your frustration. The only thing I knew about Wanda Wulz was by inference. I had read the other books mentioned in the article, but I had no inkling what they might mean in relation to these inventive images. I'm still not sure I understand, but I'm enjoying trying.

Rouchswalwe, how generously put. I've failed to give Marion Wulz her due but, like so many female artists, there is not a lot to draw on about her. I nearly pulled handfuls of hair out over the writing of this one. The Wulz family would have been notable anywhere but they don't fit easily into received wisdom about Trieste. (Jan Morris wrote a book "Trieste and the Meaning of Nowhere.") I strongly recommend Silvia Bonucci's "A Voice in Time." This novel has stayed with me and when I realized that Wulz was also from Trieste, I was intrigued.

Oh thank you for the recommendation, Jane ... I'll look it up!

Rouchswalwe, if you find something that I misinterpreted, please let me know. I've already mentioned that another article mis-identified Carlo Wulz as Wanda's brother!

What a wonderful blog! I found it searching for Wanda Wulz, and this post is the best treatment of the subject I could find -- really informative and evocative. I read that Leonor Fini was also a triestina, and have found a photo taken by the Wulz studio of Fini as a teenager, Another lifelong cat lover in the making. I wish i knew more about the Wulz sisters after the early 30s. There are a few photos, of course, including one of Wanda, a double image cheek to cheek, fanned like a book in a mirror. Thanks so much! Can't wait to read more here.

Elatia, thank you for the information about Leonor Fini. It adds another piece of the story. I, too, want to know more about the Wulz family.

Thank you for the information on the Wultz family. I have long been a fan of "The Cat &I" and have made my own version. I doubt if this excellence could be achieved with a simple "App" as has been suggested on dpreview. Even with digital tools it takes a fine hand to get this effect seamlessly. I have never before seen the two images that were used for the image-merge. I also had not realised that the cat image is reversed.
Producing this composite in a darkroom must have been a labour of some love and dexterity. The other images shown also show the playful and talented photographic skills. What became of the Wultz girls would be interesting.
The only other images I have noted on the web were stock standard competent commercial studio studies.
Tom

Tom, thank you for your comments. "Faking It: Manipulated Photography Before the age of Photoshop" was a recent exhibition at the Metropolitan Museum in New York. It's also a book by the curator Mia Fineman (published by Yale University Press) that I recommend highly. Fineman is a good writer, something that not all curators are. It's an eye opener - literally! Mia Fineman admires Wanda Wulz as much as we do.

Chateaubriand, the writer and diplomat was not posted in Trieste in 1806. He only had a brief stay there, arriving from Venice on his way to Greece. This accounts for his superficial comments.

For both poitical and religious reasons, he hated anuthing to do with the Turks. He was heading for Greece, under Ottoman occupation at the time. Sailing out of Trieste, he was already missing "yje breatj of civilization" he was leaving behind in his beloved Italy (he hated Venice but loved Rome. He spoke Italian fluently) and dreaded the prospect of having to deal with the Turks vert soon. The Ottoman empire was a place of considerable cultural achievemnt but Chateaiubriand was a man of strong likes and dislijes.

I have been to Trieste and fallen under its powerful melancholy charm.

Welcome, Rene and thank you for all this information. I fact check by using books but even so there are slips. Lucky you to have visited Trieste! Perhaps Chateaubriand was unhappy to leave Venice - I kno I would be.

I love how this has lasted nearly 5 years!