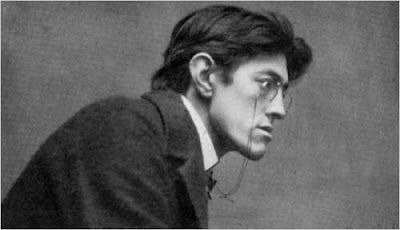 “To paint or photograph – that is the question:
Whether ‘tis more to my advantage to color
Photographic accidents and call them paintings,
Or squeeze the bulb against a sea of critics
And by exposure kill them?”
– excerpt from Hamlet-Steichen by Sadakichi Hartmann in Camera Work 6 (April, 1904).

In pictures he is tall, dark, handsome, and a bit raffish to contemporary eyes but to his contemporaries he was more difficult to place: his looks exotic; his background mongrel..  In the popular imagination (think: Madame Butterfly), mixing European and Asian blood  led to tragedy.  Sadakichi Hartmann  (1867-1944) was a multicultural man at a time where travel from Japan to Germany took weeks not hours. 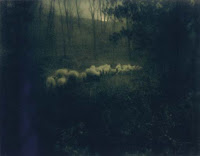 Born is Asia, raised in Europe, Hartmann's influence as pervasive as it is under reported .   Author of the magisterial History of Art in America (1901, revised 1938) , the voice of Camera Work, organizer of numerous museum collections and art libraries, and tireless writer and lecturer, his fingerprints are everywhere but his reputation has faded.  I became aware of Hartmann through The Valiant Knights of Daguerre,  organized by his daughter, Wistaria Hartmann Linton (Berkeley: University of California Press, 1978).   As Hamlet-Steichen makes plain, Hartmann was not stingy with his opinions. 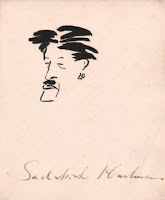 Hartmann’s work was often produced in conditions of desperate poverty and under relentless deadlines. His phenomenal memory, often remarked by those who knew him, served him well. Hoping to be remembered for his dramas (Tragedy In A New York Flat), fiction (The Last Thirty Days of Christ) and poetry, Hartmann earned his living for more than three decades as a critic.
“My father was a genuine freethinker; the rest of my family were mildly Lutheran. My stepmother was a Catholic. One of my aunts a French Jewess. My mother presumably was a Buddhist. These influences shaped my early view point."

The child of a German merchant and a Japanese woman, Hartmann was born in 1867 on the island of Desima, a trading colony in Nagasaki Harbor.  After his mother Osada died in 1868, Sadakichi and his older brother Taru were sent to live with their wealthy Hartmann relatives in Germany. There he  read the works of Goethe and Schiller before the age of ten and, at fifteen, he wa shipped off to live with an aunt and uncle in Philadelphia.   Working by day in printer's shops,  he took a drawing course at night. He met Walt Whitman and translated  German correspondence for the elderly poet, who encouraged the young man to try writing.

From Philadelphia to Boston and then to New York, Hartmann wrote tirelessly, work that he considered hackwork.  Throughout his life Hartmann also worked in pastels, receiving a solo exhibition in 1894, but he realized early that writing was his medium.  Art Critic, a magazine that Hartmann founded in 1895 failed, not from lack of talent or determination (he visited 750 galleries in the U.S. and Europe to solicit subscriptions) but because his aesthetic openness far outpaced American tastes.  His failed attempt to bring an Ibsen play to Boston a few years earlier had been an omen. 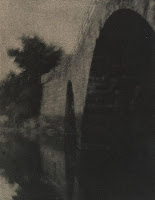 When Alfred Stieglitz founded Camera Work in 1902, the vision was his, the voice was Hartmann’s.  Shortly after meeting Stieglitz in 1898, Hartmann’s Art Photography and Its Relationship to Painting had skewered America’s lingering Puritanism, “its tentacles, octopus-like, having entangled our very customs and manners.”      Hartmann became the champion of masterpieces like Alvin Langdon Coburn’s The Bridge At Ipswich and Gertrude Kasebier’s Blessed Art Thou Among Women, exhibited at the 1904 Photo-Secession in New York.    Everyone who writes about the aesthetics of photography follows in Hartmann’s wake. 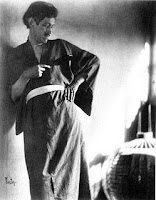 Hollywood, where he migrated after leaving New York,  was not kind to Hartmann.  He wrote screenplays that were never produced, took a brief role in a Douglas Fairbanks film, frequented John Barrymore’s salon where his wit and his eccentric dance talent entertained but did not endear him.  When World II broke out, the FBI interrogated Hartmann based on his Japanese-German background and Hollywood dropped him.  The man who wrote History of American Art was reduced to pleading, to avoid internment as an enemy alien.  His last home was a shack near the home of his daughter Wistaria Linton on the Morongo Reservation in Banning, California.

To read more:
The Margins by David Ewick
Siebold University of Nagasakci

Posted by Jane Librizzi at 8:16 AM

What an interesting person!
A child of his time...

Tattina, there's more coming shortly - as fast as I can get it done, actually.

wow, what a story. can't wait to read what else you have cooking!

I can't wait to read more about him. The first photograph is great!

I read with great interest, Jane. Thank you! Looking forward to more.

I am so happy that Hartmann's interest and importance come through. "History of American Art" is still in many libraries, although his books are out of print. Next to reprints, he deserves a cracking biography. What about Meryle Secrest?

If I were less ADD or lazy or distracted I would propose we collaborate on a screenplay about this extraordinary man. UC riverside houses his archives. Alas , I am just a devotee, neither scholar nor screenwriter. A book of his poetry is being published this Spring. UK.

If I were less ADD less lazy less distracted I would propose we write a screenplay of this remarkable man whose life has fascinated and delighted me for a long time. His archives are at UC riverside. I believe the Knox biography is out of print ( Fowler's portrayal of him in Minutes of the Last Meeting was bitterly resented by his friends and family ).
alas , I am merely a devotee. An edition of his poetry is coming out this Spring in UK. x

Welcome, Sully. (Is your name a tribute to the French poet Sully Prudhomme?)
It would take at least a trilogy to encompass Hartmann's story because how would one choose what to leave out? Just look at the subjects he wrote about - Confucius, Buddha, Christ, Walt Whitman, the Rubiyat, Schopenhauer, etc...Not to mention plays, short stories, and even technical books on photography. His breadth of interests is invigorating.
The Library of Congress listing that I found for Hartmann's poetry is "Drifting Flowers of the Sea and Other Poems" published in 1904, but I can't tell where. I do hope you will keep me posted about this new publication.