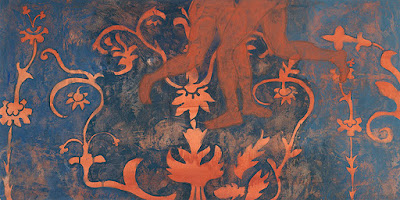 "I can hear the sizzle of newborn stars,
and know anything of meaning,
of the fierce magic emerging here.
I am witness to flexible eternity, the evolving past,
and I know we will live forever, as dust or breath in the face of stars,
in the shifting pattern of winds."
- Joy Harjo from Secrets From the Center of the World, Tucson, University of Arizona Press: 1989.

Creation stories are all about beginnings but the reverse is not necessarily the case.  For millennia, the peoples of Europe, Asia, and Africa knew about each other's existence but not about the Americas, and vice versa.  They believed they were the whole world and their creation stories were based on the information they had,inaccurate though it often was.  All that changed in 1492; thanks to a ship colliding with an island that wasn't supposed to be an island,  the known world doubled as its two halves met and were forced to acknowledge the other's existence.


Metaphysical reflections are the stuff of Kay Walkingstick's art.  What might seem a decorative fresco-style painting becomes an Edenic garden because of the presence of two unexpectedly cropped human figures who appear to be dancing. The orange and blue colors recall an early Walkingstick piece Hudson Reflection VI (1973) where the colors appear as patterns reflected in water, suggesting the appearance of camouflage. Walkingstick knows we associate camouflage with subterranean military maneuvers but she likes to me remind us that camouflage is an invention of natural genius, rather than the sole property of humans.  On trips to Italy, she noted similarities between Greco-Roman frescoes, with their flat surfaces made of natural materials and her native heritage.  She borrowed ftom them a new material: gold leaf.  As she assimilated new techniques into her work, the core elements  would remain history, the body, the natural landscape.

Born in 1935, she grew up in Syracuse,NY, the daughter of S. Ralph Walkingstick, and Emma McKaig. Her father was a Cherokee from Oklahoma and her was descended from Scots-Irish immigrants.   Art was a family affair; two of Kay's uncles were artists.  Her older  brother Charles became a commercial artist and her sister, a ceramicist.  As for Kay,  "I've grown up thinking this [art] was a viable thing to do.  I've always drawn."

When Walkingstick arrived in New York City in the late 1960s, abstract expressionism was being challenged by new forms of representation and performance in the arts.  Although most of them were men, Walkingstick was undeterred in her determination to work and have that work be seen.  It was not what the public expected from a native American, namely postcard images of southwestern deserts.   Again, unexpectedly, it was the gorges near Ithaca, NY, where Walkingstick was teaching at Cornell University when her husband died suddenly in 1989, that spurred her to explore new forms she had seen abroad.  She put diptychs and triptychs to use in novel ways,  sometimes combining sculpture and painting in a single work.  Included in a recent exhibition  at the Munson-Williams- Proctor Art Institute in Utica,, NY  titled "Mythology in Contemporary Art" was a diptych by Walkingstick from their permanent collection,  Danae in Arizona Variation II (2001).

Ah, this so beautiful. Thank you, Jane!

You're welcome, Rouchswalwe. And so much to think about, too. Rewriting art history on neglected artist at a time.