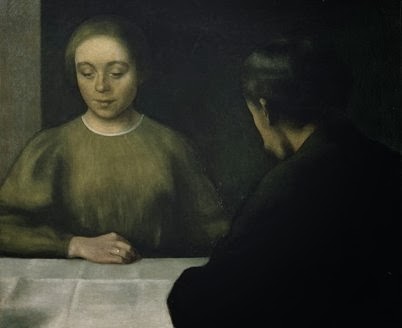 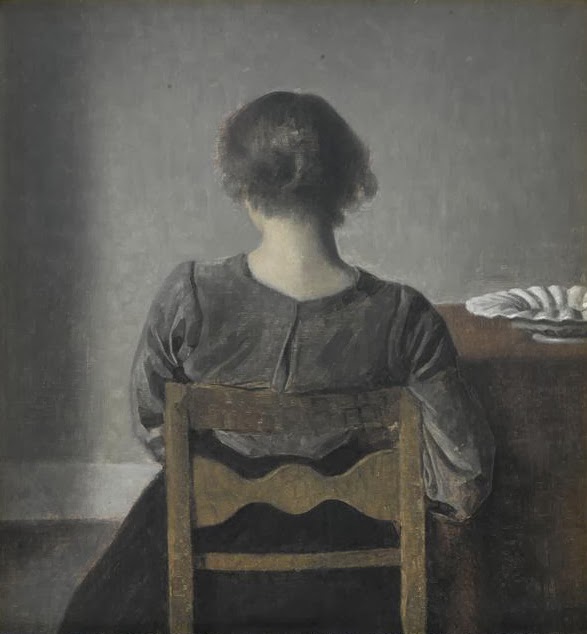 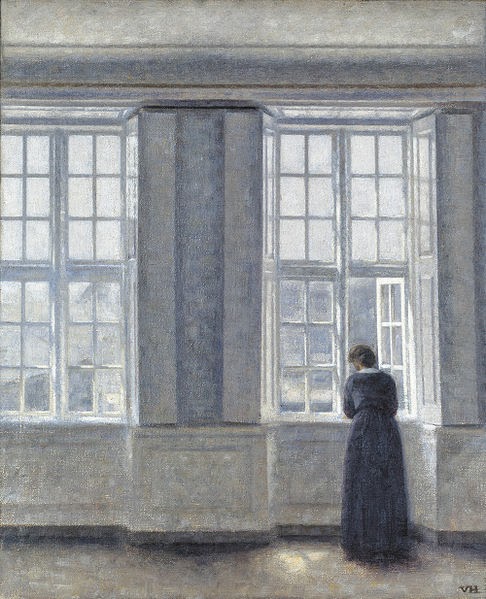 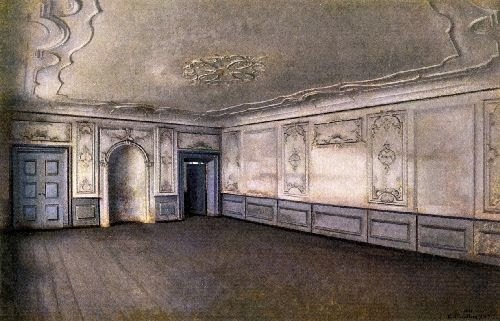 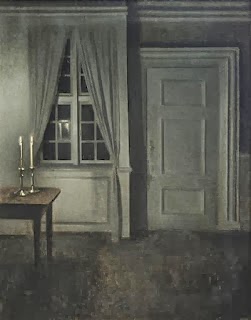 Two artists – Vilhelm Hammershoi and Alain Resnais - who both deny us "the warm, familiar acquiescence which belongs to the sense of reality.." (William James)

When French filmmaker Alain Resnais died on March 1, the announcement landed in the middle of my week with Vilhelm Hammershoi.  Resnais who was born in 1922 probably needs no introduction but the Danish painter Hammershoi (1864-1916) has attracted sporadic international attention since his death, with an exhibition at the Guggenheim Museum in New York in 1997 and at the Royal Academy of Art in London in 2008.
What the viewer's eye does as it moves around a Hammershoi painting, Resanis does for us with his camera.  With his muted interiors, Hammershoi makes reality look like a bad case of nerves.  With Resnais' Last Year in Marienbad, we are never certain whether we are observing or suspecting what we see.  The protagonists of Last Year In Marienbad  remain unnamed to the viewer throughout.  When he tells her that they have met before  (“in Karlstadt,  Marienbad, or Baden-Baden.  Or even here in this salon.”), she cannot remember.  They had planned to run away together, but the woman asked him to wait and meet again next year, he insists  Thee harder she tries to recollect, the more uncertain she becomes.


Connecting Hammershoi to Resnais is the challenge they both offer to our tolerance of ambiguity.  Is the lack of finality stimulating or just frustrating?  Without resolution, the film dares us to fill in the blank spots with our thoughts and feelings – in effect making it our own personal Rorschach Test.  What is left out of these 'objective' presentations is what the novelist Vernon Lee once described as “the certainty that something is going on, that certain people are contriving to live, struggle, and suffer, such as I am haunted with after reading Thackeray, Stendhal, or Tolstoy.”

“And as he picks up his married woman, his dream of love, and begins his pursuit, it suggests that time and emotions have no terminal points, that they whirl in fields of gravity surrounding material things and magnetize the sensitive people that come within their field.”  This is James Gibbons Huneker, critic for The New York Sun in 1905, on a drama by the Norwegian playwright Henrik Ibsen.  Huneker, who made his career writing about literature, art, and music, and well as theater, was a critic of advanced tastes.

Hammershoi's interiors became a genre all by themselves, emulated by his sister Anna Hammershoi''s husband Peter Ilsted and the artist's friend Carl Holsoe, among others. Determined to wrest definite meaning from his strangely seductive pictures, intrepid Hammershoi admirers have even diagrammed the floor plans and paced off the dimensions of Hammershoi's three  apartments at 30 Strandgade, 25 Bredgade, and 25 Strandgade inf Copenhagen. Built in the 1630s, the Christianhavn district was in part as an experiment in early urban design by King Christian IV, It is waterfront area, bisected by a series of canals, which explains why you sometimes see ship's masts outside Hammerhoi's windows.  The “Strandgade 30” interiors, painted between 1898-1909, are generally given pride of place in the artist's catalog.
Of all Danish painters at the turn of the last century, Hammershoi was the one most celebrated outside his own country.  By 1900, his work was being shown and admired in France, Italy, and England.  As early as July of 1890, the French art critic Theodore Duret had traveled to Copenhagen to see the work for himself.
Even before the advent of psychoanalysis, the doors in Hammershoi's paintings looked like questions in search of answers.  His contemporaries speculated that the painter was trying to see through reality, to pierce it so that whatever was behind could be seen. The German Georg Bierman was apparently the first to praise Hammershoi as “the Nordic Vermeer.”   After the success of his monograph on the sculptor Rodin, poet Rainer Maria Rilke hoped to do something similar on Hammershoi, but was apparently defeated by his subject.


Last Year at Marienbad received the Golden Lion Award at the Venice Film Festival in 1961.   On this side of the Atlantic, Pauline Kael sneered that the film was “an aimless disaster.”  Opinions divided between those who applauded it for breaking the mold of linear storytelling, being mostly the same people who admired  the :objective” presentation  of the nouveau roman.  Resnais had chosen the novelist Alain Robbe-Grillet, himself un nouveau ecrivan,  to collaborate on the screenplay. 'As long as the kinds of form were agreed on, we’d be able to think up the subject.”  Alain Robbe-Grillet  described his collaboration with Resnais on  the film.  Robbe-Grillet had been an engineer before he was a writer; in his novels he includes numerous ruminations on the details of buildings and landscape architecture.  Resnais picked up on this habit, to great effect, I think.  Architecture and topiary, static though they are, become dramatic characters themselves, like Hammershoi's blue and white soup tureen, or gate-leg table.

What made the release of Last Year at Marienbad a scandal was not the actions of its characters, but the war betwen admiration and outrage among its viewers.  Charges of obscurantism and "an aimless disaster"(by Pauline Kael) were hurled. The movie contains no sex, no violence, nothing blasphemous.   Like most art, all the works here are ultimately about our experience of them. But a petite scandale never hurts.

Two artists who explore the look, the one silently, the other one in words.

Tania, yes! It is even possible that Resnais was familiar with the two Hammershoi paintings that are at the Musee d'Orsay. They would have been at the Musee de Luxembourg when Resais was young.