The Panache of Anne Vallayer-Coster 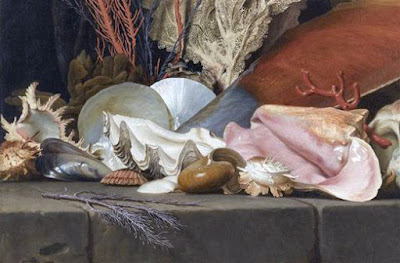 In the foreground, a small frond of purple coral rests on a table, establishing  a solid base for a collection of aquatic objects, ones usually found floating in water, seemingly weightless and usually seen as if through a scrim.  These curiosities might well have been the contents of a the collection of an amateur scientist in the 18th century but, none the less full of interest for that, at a time when most scientists were amateurs.

Anne Vallayer-Coster was a master of still life, not least because she was a great arranger of objects.  The title she gave to Les Panches de mer (Plumes from the Sea) tells us how she wanted us to see these life forms out of their natural habitiat.    Pale mauve fan-shaped corals form a backdrop resembling ferns, lighter ones in front are silhouetted against darker ones behind; hard shells and spiny corals are arranged like so many sprigs of flowers.  Meanwhile, the sponge at right  retains all its tactile qualities.

Her method, which so impressed her contemporaries and impresses us still, was to create a wealth of effects with very finely brushed strokes of oil paint; here  the reds create a marvelous effect by  drawing the eye to spaces within the shells, culminating in the lush sexual pink of the interior conch, reminding us that we are looking at the calcified remains of living, throbbing creatures.  Vallayer-Coster’s style stands apart from  other still life painters in its seamless harmony of illusionism with her deliberately decorative compositions.  Painting with panache, indeed.

Anne Vallayer-Coster was twenty-five years old when she painted Les Panaches de Mer in 1769.  The next year she was elected to the Royal Academy, an institution resistant to admitting women to its ranks; along with Elisabeth Vigee-Lebrun, she was one of only four women.  In an official statement the members noted  that Vallayer-Coster "painted as well as a man."( translation JL)   Her work was admired both at court and among the rising merchant class.  It was exhibited at the official Salon in 1771. 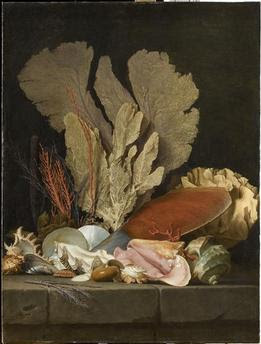 Anne Vallayer-Coster (1744-1818) was born into a family of artists; her mother painted miniatures and her father Louis-Joseph Vallayer was related to the Gobelins of tapestry fame and goldsmith to the King.

Although still life painting was considered the least intellectual of genres, Vallayer-Coster dazzled viewers with her  “precocious talent and the rave reviews” that greeted her workfrom, among other luminaries, Denis Diderot attracting the attention of Marie Antoinette. It was the Queen who  signed the official marriage contract between Vallayer and Jean-Pierre-Sylvestre Coster, when the two married on April 21, 1781.  Thanks to the Queen, Valley-Coster was given a choice apartment at the Louvre, then the royal residence in Paris, directly beneath the main gallery.  All this would be changed soon after the Revolution when the monarchy was deposed and   the building became a museum open to the public.
Due to her close association with Marie Anoinette, Vallayer-Coster's career was put on hold by the  Revolution but she stayed in Paris and remained loyal to her Queen; she was allowed to resume  exhibiting at the Salon in 1795, and continuing until the year before her death.

Chartreuse, The Color of Spartina Grass

“Chartreuse photographs badly.”  Photography can’t convey everything the human eye can see;  Eastman Kodak admitted as much about its color film decades ago.

According to landscape historian John R. Stilgoe in Alongshore (Yale University Press:1994), no photographer has ever equaled the painter Martin Johnson Heade in capturing the fleeting colors of the coastal Atlantic marshes.    Salt marshes are common along the east coast of the United States and, after he  was initially taken with them at Newburyport, Massachusetts in the 1860s, Heade continued to search them out, from Montclair, New Jersey to Florida.  To survive in the harsh environment of intertidal marshes. Spartina grasses, their  primary color chartreuse, flourish in  back-barrier marshes, tough but protected tbrunt of wind and ice.
Writers, too, have tried to capture the lambent nature of marsh life.   Sarah Clark wrote in an issue of Harper's Monthly (1882): "As the sunset deepens, the salt-meadows are clad in a golden green moss, each dry blade and bramble on the wind-swept hill gleams like a javelin, the red flowers burn into crimson flames, the cranberry swamp, too, is on fire, and the bridge in the distance looks as if it led to paradise." That bridge became when  Alvin Langdon Coburn's photogravure The Bridge At Ipswich (1904) was published in Camera Work. The bridge in question is  Choate Bridge, the oldest stone bridge in United States.
A character in Sarah Orne Jewett's novel A Marsh Island (1885), seeing the area at high tide thinks it "looked as if the land had been raveled out into the sea, for the tide creeks and inlets were brimful of water." At low tide the characteristic browns and grays of the marshland are "embroidered here and there with sapphire."  Marshing is the name given to the coastal farming, of "salt hay,"   farming made anarchic without benefit of boundaries, no fences or stone walls possible when the tides wash away all markers. By the 1660s, Plymouth colony was awash in disputes over trespass.  Jewett (1849-1909) also  reported in 1872, that the men of Rowley were armed and ready to do battle to protect their right to cut hay in the marshes. Usually people were more reasonable in settling their boundary disputes; the tides were there to administer daily doses of humility.
In early spring chartreuse is the green of the moment, a fleeting color. For the past three weeks or so, geese in the park down by the lake have been pairing off two by two; it is mating seaon on the Great Atlantic Flyway. With anticipation I check each day for babies, waiting  for those first few, short days after the goslings are born, the days before their feathers take on the dun coloration of their parents, the days when they are little fuzz balls of yellowy-green: in a word, chartreuse.
For more about Martin Johnson Heade and salt marshes, visit the excellent website Hay in Art.