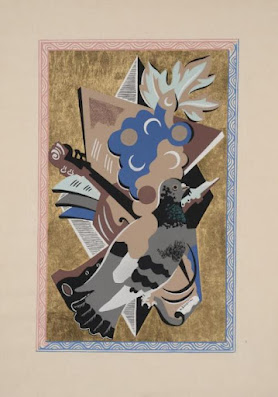 "Of course I saw the Muses
on the hill
roosting in the leaves
Well then, I saw the Muses
in the liberal oak leaves
eating acorns and berries
I saw the Muses on an ancient
oak, where they kept cawing.
My heart marveling
I asked my marveling heart
and told my heart the marvel."
- Vidi le Muse (I Saw the Muses), by Leonardo Sinisgalli, 1943, translated from the Italian by Sonia Raiziss & Alfredo de Palchi, reprinted from The FSG Book of Twentieth-Century Italian Poetry, New York, Farrar, Straus and Giroux: 2012.
As Italo Calvino famously pointed out there are no birds in the paintings of the Florentine painter Paolo Uccello, whose surname means 'bird' in Italian. But in the 20th century, a painter named  Gino Severini made an entire series of color drawings around the theme of birds.
But where, exactly, are we in Flowers And Masks? Dynamism of the modern urban city, fractured perspective and overlapping picture plans abound.  The hallmarks of  Futurism, an art practiced by a loose band  of Italian artists in the early decades of the 20th century.
From Tuscany (well, Cortona, actually) to Paris sounds  like the itinerary for a vacation and although it wasn't a vacation for the twenty-three year old Gino Severini it was an adventure.  The son of a small town dressmaker, the aspiring artist was mesmerized  by the frenetic merriment of Parisian night life.  Futurists celebrated the industrialization that was late to arrive in their native country, but Severini preferred to portray the dynamism of living beings instead of manufactured objects,
We see that fascination in his series  Flowers And Masks. A dove flutters to the music of the spheres (behind it a violin and  pages of a musical score). The mask is an emblem of an earlier era, the commedia dell' arte that flourished during the 18th century.
After a brief flirtation with  Cubism, Severini came to regard it as usually static and boring., a view he shared with his fellow Futurists. The charge had legs;  especially in their early experiments, Picasso and Braque copied the muted tones of the silent films they were so enamored of. Severini, ever restless would go on to experiment with the Golden Ratio, a Renaissance emblem  of perfection  This return to classicism led to an unholy alliance with Benito Mussolini for whom he designed murals and mosaics to decorate the dictator's halls. To atone for his sins, Severini returned to the Catholic Church in his later years; the mosaics he produced for the church were of exquisite delicacy, earning him the soubriquet of  "Father of Modern Mosaics."
Leonardo Sinisgalli (1908-1981) was an engineer who became the art director for Olivetti. He is best known for his poetry. While at university, Sinisgalli turned down an invitation to join the Institute of Physics at the University of Rome by Enrico Fermi himself.
Image:
Gino Severini (1883-1966) -  Flowers And Masks Number 13, 1930, color stencils on paper, Munson Williams Proctor Art Institute, Utica.
Posted by Jane Librizzi at 2:31 PM No comments: 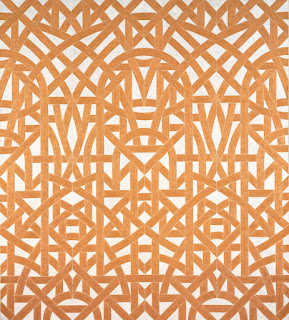 "(W)e came to realize that the prejudice against the decorative has a long history and is based on hierarchies: fine art above decorative art, Western art above non-Western art, men's art above women's art." - Valerie Jaudon & Joyce Kozloff, 1978

Jaudon and Kozloff came to that moment as they realized that the woven textiles and painted pottery they admired that had been produced anonymously had been made by women. The two began to collaborate in the mid 1970s in search of ways to create expansive surfaces by taking patterns out of their usual context. Soon they were joined by Miriam Schapiro, Robert Zakanitch, and others to establish the Pattern and Decoration Movement, sometimes referred to as P & D, that began meeting as a group in 1976

The P & D artists embrace of feminism was in defiance of art critical orthodoxy as decreed by Clement Greenberg in the 1950s. At the same time there was an active studio crafts movement making a case for clay and fiber as suitable media for abstract art. In hindsight, the use of art forms from many cultures crossed  with  Western abstraction was prescient for our own moment.

And Solomon's faith was not misplaced. The artworks were received as a breath of fresh air, praised and collected but when the 1980s dawned, there was a backlash, firstly because the artists were unabashed feminists and then because the concept of beauty was in disrepute. But Jaudon and Kozloff struck preemptively at the detractors, publishing their manifesto Art Hysterical Notions of Progress and Culture in 1978.

At more than six feet tall, Ingmar is an emphatic statement of intent: there is nothing delicate or dainty about it. Ingomar by Valerlie Jaudon evokes visions of Celtic and Islamic designs. Metallic paint is applied with bold brushstrokes, creating an impression that is at the same time a visual puzzle that tantalizes the viewer. Islamic tile work from Spain and North Africa, and mosaics from Mexico, ancient Roman, and Byzantium, all these influences are held in equilibrium in this resonant, suggestive painting. The longer I look the more I experience a sense of depth

Valerie Jaudon was born in Greenwood, Mississippi in 1945 and studied art at several academies, including the Central Saint Martins College of Art and Design in London. In 2011, Jaudon was elected to the National Academy of Design.

The exhibition With Pleasure: Pattern and Decoration in American Art, 1972-1985,, on view at the Museum of Contemporary Art, Los Angeles from October 27, 2019-May 11, 2020 and at Hessel Museum of Art, Bard College, Annandale-on-Hudson, NY from June26-November 28, 2021, is the first full-scale survey of a groundbreaking movement.

And in addition, Emma Amos: Color Odyssey is on view from June 19-September 12, 2021 at Munson-Williams Proctor Art Institute, Utica NY. It will then travel t the Philadelphia Museum of Art where it will beon view from October 11, 2021-January 17, 2022.

Madelaine de Scudery: A Map Of The Affections 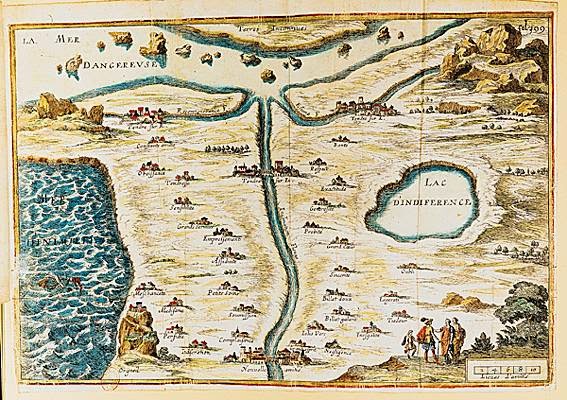 "and it's something that everybody needs...." - Lowman Pauling & Ralph Bass, Dedicated To The One I Love, 1961

If there were a reliable map for affairs of the heart, its cartographer would become wealthy, and rightly so. According to the French novelist Madelaine de Scudery, the road to love begins at Nouvelle amitie (New Friendship), located at the bottom of the map above on the River of Love.  The River has three tributaries: Respect, Esteem, an Affection. Along the right bank, various waystations with names like Fresh Eyes, Love Letters, Constancy, and Generosity invite the traveler rest and reflect. On the opposite shore, Complacence, Inequality, Treacherousness, and Perfidiousness tell a much different story. Scudery created her Carte du tendre (A Map of the Affections) as a game to amuse her friends during the winter of 1553-1664.

Marriage is absent from Scudery's map, likely because emancipation from matrimony was the only route to freedom in the 17th century. Not only did Scudery not marry, she eventually managed to free herself from the burdensome guardianship of her brother George. a typical feature of the life of a femme couverte of the minor nobility in France. Previously she had been forced to her beloved Paris for three years from 1644-1647 when Georges served as the Governor of the Fort-Notre-Dane-e-la-Garde At Marseilles.

It may be an oblique nod to this difficult time with terre inconnu (the Perilous Sea). And deviating from New Friendship could lead a woman to Indiscretion.  Caught between the Sea of Enmity and the Lake of Indifference, a woman might easily feel trapped. To add a bit of historical perspective, consider the Constitution of the Commonwealth of Massachusetts, drawn up by John Adams in 1780.  It included a provision providing that a widow should not be forced to remarry if she preferred to live alone.

In France, la querelle des femmes already had a history, dating back to the 15th century when Christine de Pizan had also been an official author at the French court, publishing The Book of the City of Ladies in 1405.

Madelaine de Scudery (1607-1701) was born just nine years after Henry IV issued the Edict of Nantes in 1598, ending four decades of devastating violence over religious doctrine between Protestants and Catholics. With hindsight, the French  Reformation was one of history's great failures. Born in Le Havre where her father was the captain of the port, she was orphaned at the age of six, her care was then entrusted to the care of an uncle who was a cleric. An estimable and farsighted gentleman, he provided the girl with an excellent education: her studies included reading, writing, drawing, music, Spanish, and Italian. There is even some evidence that she studied Latin and Greek. She also applied herself to the study of agriculture and medicine.  A voracious reader, Madelaine began her philosophical studies with Montaigne (hence her skepticism) and Plutarch (hence her stoicism).

After the death of their uncle in 1637, the siblings moved to Paris where Madelaine was introduced to the salon chambre bleu (Blue Room) at the Hotel Rambouillet where she became a regular attendee. From there she launched her literary career, publishing a defense of education for woman in Illustrious Women in 1642. Scudery also published numerous highly successful novels including Artamene, s two million words it holds the record as the longest novel ever (yet) published.

The pair then moved to the Marais where Madame de Scudery established her own weekly salon Samedis (Saturdays). During the 17th century, women were once again attempting to make their way as authors in the (male) literary world.

The Precieuses, as the women were called, were repeatedly subjected to ridicule, notably by Moliere in his first play Les precieuses ridicules (1659). It is also worth noting that the King, Louis XIV, also scorned learned women and that Moliere was a favorite of the King.

As if this were not enough to discourage the women, Moliere took another swipe in 1672 with Les femmes savants or The Clever Women. Make no mistake, thee stakes were high for all concerned. Reputation is a form of gold in the republic of letters. Not only did these women, whether at Royal court or in the salons of Paris, mean to attain the status of authors, they intended to replace the male concept of love - wherein it is the man who gets to choose and the woman can only assent or refuse (if she is lucky).  One reason that Scudery made the Lake of Indifference so large was that, then as even today, we women keep watering it with our tears.

Scudery was honored by the Academie Francaise in 1691. Madelaine de Scudery survived her brother Georges by three decades, dying at the ripe age of ninety-three.