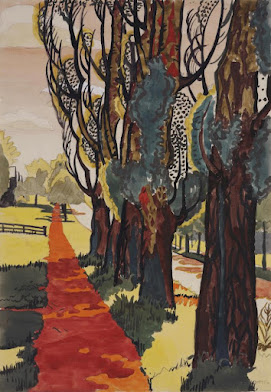 We can intuit from looking at Poplar Walk (dated June 7, 1916) an extremely hot day.  It is no accident that the sidewalks are painted in a vivid orange, radiating heat even stronger than the yellow lawns; notice that the grass is only green where it is shadowed by the trees.
Those poplar trees are ecstatic, their branches arching upwaex into the light, their decorative foliage suggests that Burchfield had been looking at Asian art.
In 1916 Charles Burchfield graduated from the Cleveland School of Art.  At age twenty-three the artist was on the brink of the most creative period of his life. He spent that summer at his mother's home in Salem, Ohio.
Burchfield's working method was to sketch outlines and make color notations in graphite, then apply watercolor over them. In Poplar Walk he left a few areas of the white paper show through drawing the eye deep into the distance.
The largest collection of Burchfield's work is housed in the Burchfield Penney Art Center in Buffalo, New York across the street from the Albright-Knox Gallery.
Image - Charles Burchfield, Poplar Walk, June 7, 1916,  transparent and opaque watercolor on white paper with color notations in graphite Munson Williams Proctor Art Institute, Utica, NY
Posted by Jane Librizzi at 11:08 AM 8 comments: 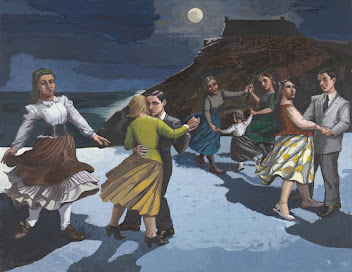 I can' prove it but I think Paul Rego saw Winslow Homer's Summer Evening although she said that the idea for the painting came  from her husband. Rego's paintings are  full of her fascination with such disparate subjects fairy tales, politics, and sexual transgression so it is hardly a stretch to see The Dance as a symbol for 'the dance of life. We see a woman standing alone as she watches two couples dance, one perhaps courting, the other of an obviously pregnant woman.  In the background is a trio -  grandmother, mother, and daughter. All her possible choices are  arrayed  under a full moon with harsh lighting and its attendant strong shadows.
Rego was rewriting history from the female point of view all her work. By her emphatic seriousness and a style of archaic realism, Rego conferred a symbolic status on them, valorizing their struggles and compromises.

Paula Rego was born in Lisbon, Portugal in 1935, an only child in a privileged family. At the time the country was ruled by the fascist dictator Antonio Salazar.  His regime was hostile to women, a Latin version of kinder, kuche, kurche, So, although Paula's mother began to draw at the age of four there was no chance that she could make a career of art.

In 1951 Rego moved to England to study art at the Slade School under the care of a guardian; her family was quite conservative although strongly anti-fascist. Her father commissioned her to create murals for a workers' canteen in 1952 but it was a decade later before she began to exhibit her work in group shows in London.

The British Royal  Academy has described Rego as "one of Europe's most influential contemporary figurative artists."  In 2010 she was made a Dame by Queen Elizabeth for her contributions to the arts. Indeed the British were so fond of Rego that they routinely referred to her as a Portuguese-born British artist.

Rego died on June 8, 2022. Her granddaughter Grace Smart, a theatre designer, tweeted : "Paula Rego  was a fantastic and world changing artist, and grandma. She taught us how to sew, draw, put on eyeliner, and tell uncomfortable stories." That last may be what the late critic Robert Hughes was referring to when he remarked that if there were two or more people in a Rego painting something bad would happen to one of them. 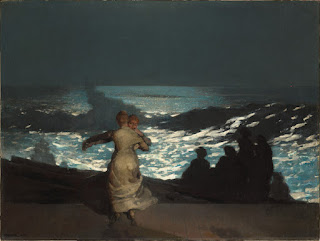 It may surprise us today but during his lifetime Winslow Homer's work received a mixed reception. Potter Palmer, an early collector of Impressionist art from Chicago, turned down Homer's offer to sell of Summer Night. So the painting languished for the rest of the decade on loan to the Cumberland Club in Portland, Maine.
But all that changed in 1900 when Homer included the work in his entry to the Exposition Universelle in Paris.  Among its  admirers were Claude Monet and Paul Cezanne, two very different artists.  After Summer Night was awarded a Gold Medal, the French government bought the picture, which is how it is eventually found a home in the Musee d'Orsay.  Summer Night is included in the Lafayette Database, a project of the Louvre museum that inventories all the American artworks held by French museums.
Summer Night was painted in Prout's Neck where Homer was living in the 1890s. We can almost hear the music two young women are dancing to and the crash and roar of the waves that their comrades on the shore  are spellbound by.  To make sound come at us off the canvas is nothing short of amazing. One of Homer's great gifts was his ability to evoke sensations in the viewer, arguably the  aim of the Impressionists, but to do it with a realist technique.
Image: Winslow Homer - Summer Night, 1890, oil on canvas, Musee d'Orsay, Paris.
Posted by Jane Librizzi at 4:41 PM 2 comments: 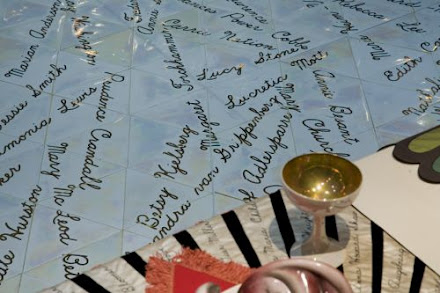 "Most lovely of the things I have loved and lost; the sunlight,

"next, bright stars, the moon,

ripe gourds, the fruit of apple trees, the pears."

Anyone who has studied ancient Greece has probably heard of Sappho of Lesbos. Born around 630 BCEm Sappho lived for about six decades and her lyric poetry earned her the sobriquet "the Tenth Muse."  Higher praise cannot be imagined.

Praxilla was a native of Sikyon, a city-state on the Gulf of Corinth. It took Judy Chicago's Dinner Part  to pay proper tribute to Praxilla of Sikyon, one of thirty-nine women honored with hew own specially designed place setting at a non-hierarchical triangular table. You can see in this photo some of the 999 women whose names are inscribed in gold on a white tile floor. More than four hundred women participated in making The Dinner Party.

Lesser known than Sappho, in her day Praxilla was called "immortal tongued'", in a time and place  where women participated in public and religious events. Today her lyric poems survive only in fragments and paraphrases; primarily "table songs" they were meant to be sung after dinner as guests imbibed wine from drinking gourds.

Posted by Jane Librizzi at 11:28 AM No comments: