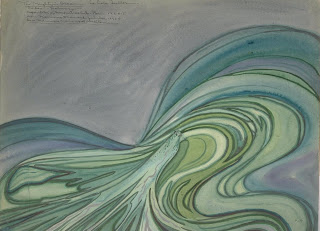 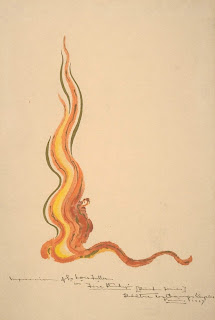 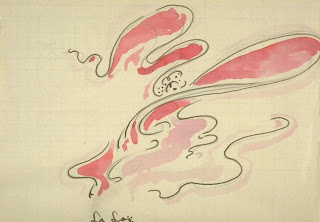 Autocrats Of The Autoroute 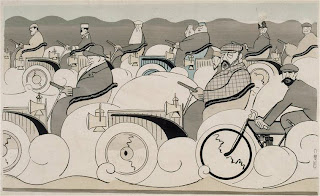 L'automobile, c'est francais!
Americans think of Henry Ford, but the automobile's early development was a competition between French and German inventors.  There was Leon Bollee who invented the Tricycle Bollee,  a three-wheeled vehicle, with the passenger seated in front of the driver, that reached the unprecedented average speed of 28 mph in the Paris-Tourville road rally of 1897. The firm of Panhard et Lavassor, founded in 1889, was the first company devoted exclusively to manufacturing automobiles.  Sensing an opportunity, the Peugeot Company followed suit, switched from the manufacture of coffee grinders to automobiles. 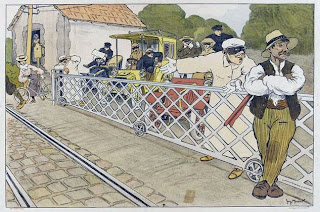 The French claim competitive bike racing began at the Parc de Saint-Cloud in 1868.  Their claim to  road racing is the Gordon-Bennett Cup sponsored by The New York Herald newspaper.   Inaugurated in 1900, the route from Paris to Lyon was a 392 km (244 mile) circuit through the French countryside, a hair-raising experience for drivers and spectators alike.
Like bicycle racing, the four-wheeled racers became figures of glamor to the general public.  Camille Jenatzy, a Belgian racer, who won the 1903 cup was  nicknamed the Red Devil for the color of his beard,  Jentazy had been the first to break the 100 km speed barrier back in 1899 in a bullet-shaped Mercedes, La Jamais Contente (The Never Satisfied). He predicted his death-by-Mercedes, but no one could have guessed the way it would come about. After being shot accidentally by a hunting companion, Jenatzy bled to death as he was being taken to a hospital - in his Mercedes.
When a Dutch engineer named W. Valdepoort referred to drivers  as Autocrats in The Selfish Car (1953) he tapped into a continuing skepticism about the automobile, despite its ubiquity in the modern life. 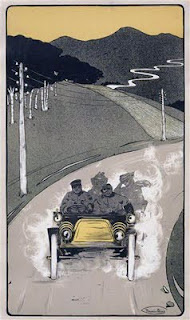 Take  automobile clubs which originated for the privileged few who enjoyed a freedom of the road that no contemporary driver stuck in traffic will ever experience. The clubs published guides listing "autophobic" towns where the locals had demonstrated their displeasure at noise, dust, and dangers posed by speeding vehicles.
As if to confirm the worst fears of pedestrians, Octave Mirbeau wrote:  “How frustrating, how thoroughly disheartening it is that these pigheaded, obstructive villagers whose hens, dogs and sometimes children I mow down, fail to appreciate I represent Progress and universal happiness.  I intend to bring them these benefits in spite of themselves, even if they don’t live to enjoy them!”  - (Sketches of a Journey – 1908)


Magarete Witte, an early auto tourist from Germany, wrote in 1905 that "a journey through Holland is dangerous since most of the rural populace hates motorists fanatically. We even encountered old men, their faces contorted with anger, who, without any provocation, threw fist-sized stones at us."  The arrogant driver would become a stock subject for illustrators, and little wonder. What Witte failed to mention was that German traffic laws allowed hit and run drivers to leave the scene of an accident without reporting it to the authorities. 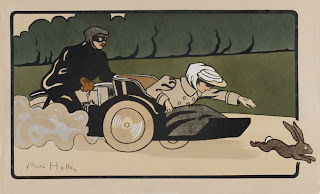 Americans owe the posting of speed limits to the reckless driving of a wealthy hobbyist, William K. Vanderbilt, who was given his first motorized vehicle – possibly a Tricycle Bollee – at the age of ten. (That's a Tricycle Bollee in the illustration by Andre Helle where the woman chases the rabbit.)  In 1904, William K. sponsored the first road race in America near the Vanderbilt family estate on Long Island.  Encouraged by the success of the annual Vanderbilt Cup, in 1909 he financed construction of the nation’s first road solely for the use of automobiles, the Long Island Motor Parkway.
Constantly looking for new routes, Vanderbilt motored around Europe, where he was forced to flee angry mobs after he killed two dogs in Pau and injured a Tuscan child while motoring through France in 1902.   A group of normally peace-loving Swiss beat him and threatened to burn his car until the police intervened.

"Pedestrians make up the greater part of mankind. Not only that, the finer part. Pedestrians created the world. It was they who built towns, put up skyscrapers, installed drainage and plumbing, paved the streets and lit them with electric lights. It was they who spread culture all over the world, invented painting, thought up gunpowder, built bridges across rivers, deciphered the Egyptian hieroglyphics, introduced the safety razor, abolished slavery, and discovered that a hundred and fourteen tasty, wholesome dishes could be made from beans.
And then, when everything was ready, when our planet had acquired a comparatively well-planned appearance, the motorists appeared. 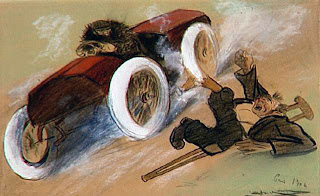 It should be noted that the motor car was also invented by pedestrians. But for some reason the motorists soon forgot about that. They began to run over the meek and mild, clever pedestrians. The streets built by the pedestrians passed into the hands of the motorists. The roads were doubled in width and the pavements were narrowed down to the size of a tobacco wrapper. The pedestrians began to huddle against the walls of buildings in alarm."
-   from The Golden Calf by Ilf and Petrov, translated from the Russian by John H. Richardson, Frederick Muller Limited, London: 1962 (1930) 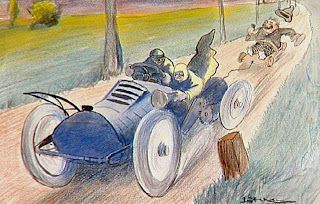 Ilya Ilf (1897-1937) and Yevgeny Petrov (1903-1942) were the authors of the classic Russian farce The Twelve Chairs.  No one has ever adequately explained how these anarchic humorists avoided censorship - or worse - during the early decades of Soviet rule.  Both men died prematurely:  Ilf of tuberculosis and Petrov in a plane crash, victims of the same anarchic fate they managed to wring every ounce of laughter from in books.
In 1935, on special assignment for the Moscow newspaper Pravda, the two spent ten weeks criss-crossing the United States in a Ford motor car.   Ilf took this photograph with his Leica; it is reprinted from Ilf & Petrov's American Road Trip (published by Princeton Architectural Press: 2006).  Like (Vitaly) Komar & Alexander) Melamid, those single-name, satirical students of art, they belong in the pantheon of absurdist truth tellers.
As if Ilf & Petrov the illustrators, many of them anonymous,  left a visual record of early auto history convey the absurdity of  humans on wheels
Images: from the collection of the Musee de Voiture, Compiegne.
1. Anonymous - The Sovereigns, c. 1905.
2. Maurice Blais -  Mountain Road, c.1900-10.
3. Georges Meunier - untitled.
4. Andre Helle - Tricycle Bollee, ca. 1898.
5. Anonymous - Jenatzy In his Winning Mercedes-Benz.
6. Anonymous - The Driver, 1904.
7. Anonymous - Le cul-de-jatte, ca. 1900-10.
Posted by Jane Librizzi at 11:56 AM 2 comments: