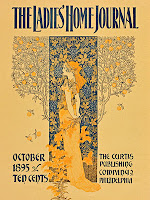 From a time, shrouded in the mists of antiquity no doubt, when man first discovered the New Woman, it has been a truism that woman needs advice. And legions have fearlessly offered it.
From a modest beginning as a supplement called Women At Home in the now forgotten Tribune And Farmer, the Ladies Home Journal was born in 1883.   The brainchild of Louise Knapp Curtis, wife of magazine publisher Cyrus Curtis, the Jounal became the doyenne of American women's magazines.  Its motto: "Never underestimate the power of a woman."   Its most influential editor was the Dutch immigrant Edward Bok who presided over the magazine for 30 years from 1889 to 1919. 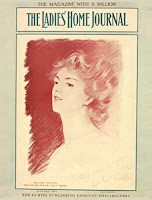 Bok used the pages of the Journal to promote women's suffrage, pacifism, and conservation. He persuaded America's presidents to address his readers through its pages. The rugged Theodore Roosevelt lauded American Women As Mothers, while the scandal-plagued adulterous Grover Cleveland weighed in on The Honest American Marriage, and Herbert Hoover gave instruction on Thrift And The American Woman to combat the rigors of the Great Depression.

Even as the magazine promoted equal rights for women it inevitably reflected the ambivalence of society at large. Women's Chances As Breadwinners by the artist Gleeson White fretted over a "lack of supreme talent" as though men didn't have the same problem.  Remedies For Cooking Disasters was suitably alarmist in tone. And Menus For Entertaining The Bride  includes the deliciously symbolic dish 'Blushing Fluff', a sweet concoction of whipped cream, egg whites, and stewed rhubarb.

Reflecting women's secondary position in the public arena, the magazine framed controversial topics as questions, most notably in their long-running feature Can This Marriage Be Saved? Responding to Prohibition, the Journal wondered  Can The Church Replace The Saloon? A photo expose of the newly popular bathing beaches from the 1920s raised the alarm: How Much Of This Do You Want Your Daughter To Share? And it addressed the perennial parental fear of popular music: Does Jazz Put The Sin In Syncopation?  Losing battles all, but saloons, beaches, and dance floors were arenas of potential personal freedom just as the voting booth was. 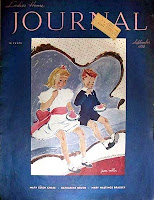 World War II changed many things, but not the Journal's propensity to worry for its readers. To find out Have You An Inferiority Complex? the reader had to answer questions like "Are you thrown into confusion when your husband makes a social blunder?" Celebrities, including Albert Einstein, Walt Disney, and Joan Crawford were asked to answer a child's question Why Was I Born? 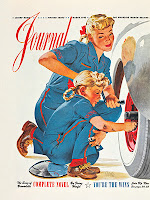 In the midst of post-war prosperity, there seemed to be plenty to worry about. Dorothy Dix (1861-1951), marriage advice columnist and the most widely read woman journalist post World War II, warned: "In these days when men are loathe to burden themselves with the support of a family, girls are continually assaulted with free love propaganda." Popular historian Will Durant, asked to answer the weighty question 'What is Civilization?", hurled a jeremiad at readers: "(O)ur music is barbarous, our art...is mere groping, our literature has deteriorated since Emerson." And Abraham Stone, M.D., bravely catalogued What Husbands Don't Know About Sex. (It's a long article.)

Even in the doldrums of the 1950s, the Journal found feminist bright spots. An article The Best Kings Have Been Queens suggested that things had been better in other times and might yet be better again.  Profiling two queens, Elizabeth of England and Julianna of the Netherlands, in 1960, the Journal pointed out that The World's Richest Women Are Queens. True as far as it went, but hardly practical career advice. 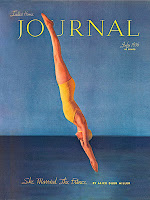 The Journal also welcomed articles from serious women with serious things to say, from Eleanor Roosevelt to aristocrat-turned-member of the British Parliament, Viscountess Nancy Astor. Lady Astor's words from 1940 on women in politics ring true even today. She acknowledges the arguments for women's participation in the political arena, based on stereotypes of nurturing and peacemaking, but brushes them aside. She is tough, realistic, and straightforward: "(T)here is nothing in women's past that they want to go back to, so of course they want to go forward."

And then came the sit-in of March 18, 1970.  Feminists occupied the Journal's Manhattan editorial offfice for eleven hours.  Among other worthy things, they demanded  an end to Can This Marriage Be Saved?    with its monthly variations on the old joke: "They have a give and take relationship.  She gives and he takes."  Only women weren't laughing anymore.
Images: Ladies Home Journal online archives
For further reading: THE JOURNAL OF THE CENTURY (1883-1976) edited by Bryan Holme, et al,  New York, :Viking Press:  1976

I didn't manage to work into the article mention of the many respected artists whose work appeared on the LHJ covers. The January 1904 cover is a portrait of actress Ethel Barrymore by John Singer Sargent, the November 1911 cover is one of Cole Philips's signature 'meltaway' illustrations, and the July 1936 cover is the first appearance by photographer Edward Steichen in LHJ.

Jane, you are a marvel! What a fun post and informative, too. I had no idea.

That sit-in was a great moment in history for those of us women who have since become journalists. John Mack Carter was editor-in-chief at the time. He agreed to turning over the August issue to the protestors. They demanded more female editors, more staff diversity, onsite day care, and better pay. Three years later Mack's assistant, Lenore Hershey, became the Journal's editor-in-chief. Never forget what Frederick Douglas said: "Power never concedes anything without a struggle. It never has. It never will."