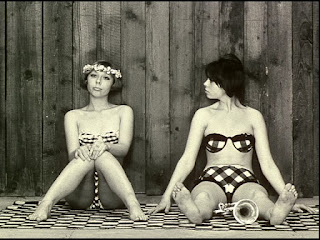 "If everything is going bad in this world, then we're going bad as well!"

"This film is dedicated to those whose sole source of indignation is a messed up trifle."


Have you ever wondered what Snow White and Rose Red would do in the modern world?  Well, here is one answer,two  bikini-clad and hungry for life - and they are gluttonous.  Also, like other teenage girls, they are clothes mad and love their accessories, whether Jarmila's folral halo of the scraves they uuse to entice and hogtie the men they encounter.  Jarmila and Jitka, or Marie I and Marie II,  never let a "No Entry" sign stop them; indeed they never slow down.  Jitka Certhova and Ivana Karbanova, as Jarmila and Jitka, give performances both daring and hilarious.

"If everything's going bad in this world, then we're going bad as well!"
- See more at: http://www.londoncitynights.com/2012/05/daisies-1966-directed-by-vera-chytilova.html#sthash.Pr0R5sHS.dpuf 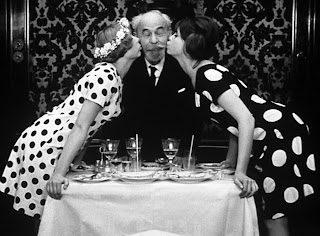 In this version, the bear never stands a chance with these girls.  They take Mae West's  dictum ("Whenever a girl goes bad, there go a whole lot of men right after her.") and turn it on its head.  They go on expensive dinner dates with older men (think: bears in the version by the Brothers Grimm),  eating, drinking, and kissing , only to  escape  at the last moment.  The girls know they have any man outnumbered and together  they dispatch their would-be paramours by train, deprived of the expected sexual quid pro quo.
When the girls break into an abandoned factory that is marked "Nourishment" they find nothing to eat.  Unsurprisingly, Daisies ends in a scene of total food mayhem.  The girls stage an epic food fight cum fashion show in a locked banquet hall, gluttony seen as destruction.  The trifle that appears in the film's dedication is both consumed and destroyed. 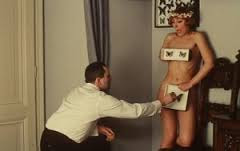 Daisies fits into something larger that was happening in Czech cinema of the 1960s.  Jiri Menzel's Closely Watched Trains (also 1966) was the coming of age story about a young railroad station guard trying to lose his virginity and Milos Forman's The Firemen's Ball (1967) chronicles a series of mishaps that end in total chaos.  Chaos, anarchy, and in Chytilova's films, jump-cutting, montage, and a wild efflorescence of color.  At the time, Jean-Luc Godard dismissed the Czech New Wave as being too bourgeois, possibly sensing the competition working up to a critical mass.

That this movie was made - or even imagined  - before the new wave of feminism broke shows just how little of reality we comprehend, even in the stories we do tell.  The history has yet to be written pointing out the contradictions that were the ticking time-bomb of female lives in the postwar world.  Efforts have been made, such as Kate Millett's  Sexual Politics (1970), but the master narrative remains just that, the old truism stills holds: the slaves know more about the masters than the masters know about the slaves. 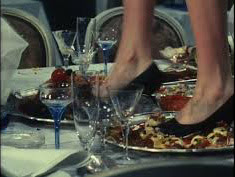 At the time the film was released, members of the Czech Parliament, whose state-sponsored  film studio  had financed Daisies, objected to the film  on the grounds that  "farmers with great difficulties trying to overcome the problems of our agricultural production" would find the careless waste of food offensive.  In the event, workers loved  Daisies and saved it from being totally suppressed.  Defenders of Daisies denied that the film contained political messages, that it's anarchy was harmless fun, a That said, the government did prevent Chytilova from working until 1975.

Vera Chytilova (1929-2014) was a Czech filmmaker who had trouble with censorship from the beginning of her career in the 1960s.  Her style was abrupt and her use of inter cutting images was one way she chose to get around the constraints.  The premature psychedelia of the colors came from the  brillaint cinematography Jaroslav Kucera (1929-199), Chytilova's husband.

Images:
Stills from Daisies, on DVD from the Criterion Collection: 2012.
The movie was filmed partly in color and partly in black and white.
Photo of Vera Chytilova, courtesy of  Czech Film Institute, Prague.
Posted by Jane Librizzi at 1:21 PM

Art, you are welcome!