The Book on Whistler: Sadakichi Hartmann Takes His Measure 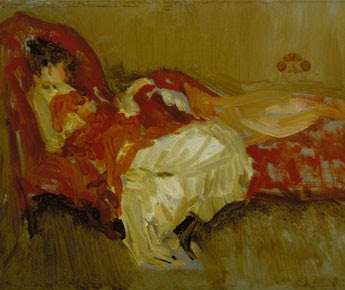 He has been dead for one hundred and twelve years but James Abbott McNeill Whistler is  making a star turn  in the Berkshires this summer, with two exhibitions, one in the Lunder Center at the Clark Art Institute and another at the Williams College Museum of Art, both located in Williamstown, MA.  This is no small thing when one of the paintings, the one at the center of the Lunder exhibition, is not only Whistler's most famous painting  but is also the most famous painting by an American artist that is not in the collection of an American museum.
Whistler's Arrangement in Gray And Black No.1, commonly referred to as "Whistler's Mother" was purchased from the artist by the French nation in 1891.  Painted in 1871, the picture was exhibited at Philadelphia in 1882 but no American had the foresight to buy it.   Interestingly, the French art critic and dealer Theodore Duret who was an early supporter of Whistler's work was also an advisor to the American collectors  Henry and Louisine Havemeyer,  whose collection became one of the treasures of the Metropolitan Museum of Art.   If only is a thought that hangs in the air whenever I think of Whistler's painting of his mother.   This may have been one of the things Sadakichi Hartmann had in mind when he wrote of Whistler, “America really did nothing for him and he did nothing for America."

When Hartmann published The Whistler Book in 1910, he was already an established author, with Shakespeare In Art (1901) and a two-volume History Of American Art (1901),  among other books, to his credit.   The child a Japanese mother and a German father, educated in Germany and the United States, Hartmann had the background – and the connections – to understand the artist in his place and time.   “One afternoon  in 1892, walking along the boulevards with Stephane Mallarme, during absinthe hours, I met Whistler.  The poet and painter raised their hats and shook hands and exchanged a few words in French, which I did not understand.”    Hartmann's knowledge of art  was buttressed by personal experience; he had seen the works he wrote about at first hand, as in:  “Chardin and Watteau, who cross-hatched and stippled pure colours in their pastels and  water colors, were really the forerunners of impressionism.” 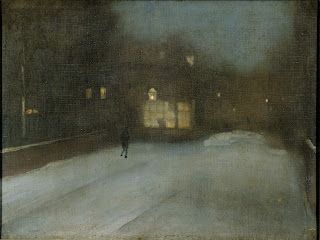 “Impressionist composition is unthinkable without focus.  The lens of the camera taught the painter the importance of a single object in space to realize that all subjects cannot be seen with equal clearness, and that it is necessary to concentrate the point of interest  according to the visual abilities of the eye.  There is no lens, as everybody knows, which renders the foreground and the middle distance equally well.” - Sadakichi Hartmann, excerpted from The Whistler Book (1910)

Sadakichi Hartmann was not being tendentious; an astute critic of modernism in all media, he was well aware that painters could have seen this with their own eyes but they needed photography to notice the phenomenon.   As an early critic writing about  photography as art for Alfred Stieglitz’s Camera Work, Hartmann was always attentive to the influence of photography on painting, forthright in  pointing out the connections  at a time when the subject was only discussed sub rosa.  Even   an artist like the Belgian Fernand Khnopff, who made no secret of his use of  photography in  his pictures, found that critics  were unprepared to assimilate this new method into their discussions. 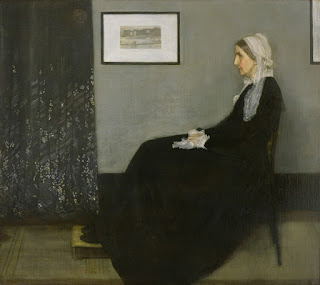 Was Whistler interested in the narrative uses of painting?  Not much.  For an answer, consider  his most famous painting: Arrangement in Gray and Black No. 1: Portrait of the Artist's Mother.   Notice how the outlines of the black dress worn by Mrs. Whistler cannot fit the proportions of an average body; as painted, shr has the head of a petite 19th century woman and the body of a modern basketball player.   This artfulness only makes it easier for viewers and critics to supply the influences and the list of candidates is long: Rembrandt for darkness, Courbet for luminosity, Japanese  ukiyo-e prints for flatness, photography for focus.
Hartmann's assessment of what makes a Whistler interior so mesmerizing has lost nothing to time, changing tastes, or competing theories:  “…there are many horizontal lines in its composition but the diagonals of the figures shape our response.  In Whistler's interiors, the background is usually a straight wall: he rarely indulges in perspective."

The Whistler Book is still worth reading today.  Its style may be somewhat  dated but it is clear and graceful,  as you would expect from a writer who understood the mutability of taste.  Close as he was to his subject in real time, Hartmann needed no over-arching theory to justify his interest or make his career.   Indeed, Sadakichi Hartmann was so full of ideas that he needed a pen name - Sidney Allan - to get them all into print.

For more about Sadakichi Hartmann.

For more information on the exhibitions, visit Clark Art Institute and Williams College..


To read The Whistler Book by Sadakichi Hartmann, Boston, The Page Company: 1910.