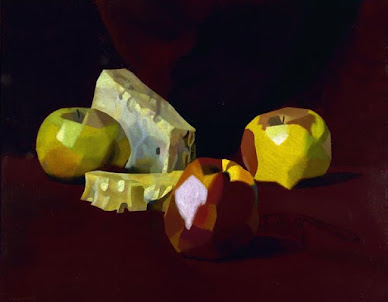 For some unfathomable reason the British writer G.K. Chesterton started the rumor, "Poets have been mysteriously silent about cheese."

In this still life by Luis Fernandez, there is Swiss cheese in front, I think ,and a brick of Stilton (possibly) in back. As for those apples, all  angles and marmoreal faceted surfaces,  they remind me of glass paperweights. Welcome to the world of Cubist cheese. Salvador Dali's notorious limp watches  in The Persistence of Memory (1931), were inspired by Camembert.  Cheese in art has a long and intriguing history.

How cheese is aged is a story in itself.  Affinage is the process of aging cheese in a cave; an affineur is a person who tends these works in progress for months or even years, until they are ready to be eaten. Other French terms are fromage (cheese), fromager (a cheese monger) and fromagerie (cheese shop). All cheeses that have rinds need to be aged in a cave. And the rinds need to be carefully monitored, high humidity maintained and mold evenly brushed over the surface of the wheel at regular intervals. What this means is that during the pandemic, affineurs are essential workers.

On Sunday, September 26, 2021, a group calling themselves 315 Foodies (for the Central New York Area Code 315) met to assemble what the Guinness Book of World Records was on hand to certify as the world's longest charcuterie board at 315 feet. Cheese mongers from around the region took part, using wooden cheese boards that interlocked like puzzle pieces; each board one foot long.

Before there was cheese in upstate New York, there was water.  About 11,000 BCE, a glacial waterfall carved out the gorge where Little Falls now stands. From this point, rivers to the east drain toward the Atlantic and to the west the fluvial deposits go toward the Great Lakes.  The Mohawk River gorges and the Erie Canal, both running east to west, made a flourishing mill culture that brought prosperity to Little Falls -  grist mills, paper mills, flour mills, sawmills, and textiles mills.

During the second half of the 19th century the city was known as "the cheese capital of the world," thanks, in no small part,  to the promotional zeal of local newspaperman Xerxes Willard. Then, as now, dairy farming and cheese making are important to the New York State economy. The Chobani yogurt Company was founded in 2005 by a Turkish immigrant in South Edmeston, a hamlet located south of Little Falls.

Note: History records three painters named Luis Fernandez, one a 17th century Spanish history painter, one a contemporary Venezuelan, and this Luis Fernandez (1900-1973) , an Asturian artist who studied at the School of Arts and Crafts in Barcelona.  In 1924 Fernandez moved to Paris where he met Braque, who introduced him to Cubism.  Fernandez died in Paris in 1973.

You can order a wide selection of chesses and other comestibles at Calle1945. 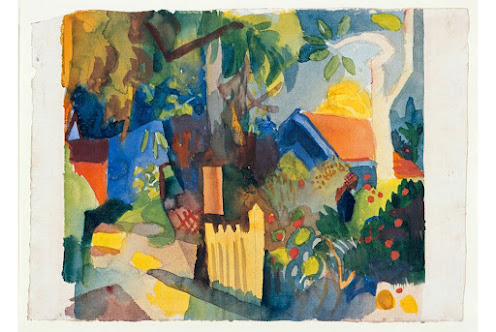 "What I most cherish is the observation of the movement of colors." - August Macke
The image of a tree of light evokes thoughts of spring , two months away or almost a year in the past, depending on your January mood. August Macke's mood in his Landscape With A Tree Of Light is one of sun-bathed wonderment. There is an all-at-once quality in Macke's pictures that suggests an acquaintance with Italian Futurism. His painter friend Franz Marc characterized Macke's  special gift as "a brighter and purer sound to color than any of us; he gave it the clarity and brightness of his whole being."
August Macke (1887-1914) was born in Westphalia and died on the battlefield at Champagne during the second month of World War I. Although he was just twenty-seven, his artistic career was already  eight years, At his death, Macke had produced some 600 paintings. He had painted his first watercolor when he was fifteen. With his friend Franz Marc, the two founded Der Blaue Reiter (The Blue Rider), a group of German Expressionist painters.
Meeting Robert Delaunay was the pivotal artistic relationship in Macke's career; the older painter's chromatic Cubism altered Macke's use of colors. Nevertheless, Macke continued to portray scenes of everyday life, a subject matter he had learned earlier from the Impressionists.
\Image - August Macke - Landschaft mit hellum Baum (Landscape With A Tree Of Light), 1914, watercolor overlaying pencil, State Museum, Berlin.
Posted by Jane Librizzi at 4:30 PM 6 comments:

Come, children, gather round my knee;
Something is about to be.
Tonight's December thirty-first,
Something is about to burst.
The clock is crouching dark and small,
Like a time bomb in the hall.
Hark! It's midnight, children dear
Duck! Here comes another year!
- "Good Riddance, But Now What?" by Ogden Nash
The  artist Jay De Feo (1921-1989) was admired fort the fearlessness of her work. Born Mary Joan, she acquired the nickname Jay as a girl. Her mother was a nurse and her father was a traveling doctor with the Civilian Conservation Corps: eventually Jay and her mother settled in California.
In 1959, the year she painted The Jewel, De Feo became a member of Bruce Connor's Rat Bastard Protective Association in San Francisco. Also, that year her work was included in a group exhibition at the Museum of Modern Art in New York..  The year before De Feo had begun work on her monumental painting The Rose, which would take ten years to complete.
Image Jay De Feo - The Jewel, 1959, oil on canvas, Broad Museum of Contemporary Art, Los Angeles.
Posted by Jane Librizzi at 11:13 AM 3 comments: