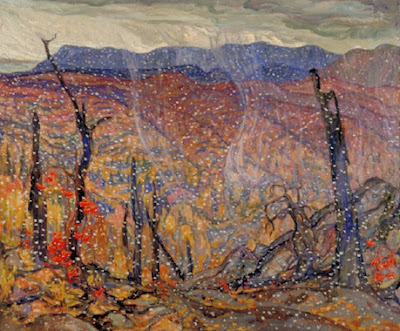 "...the end of our exploring to arrive where we started and know the place for the first time." - T.S. Eliot

One autumn years ago I saw the first snow at Algoma.  It was the middle of October, the time when Canadians celebrate the Thanksgiving holiday.  I was on the road that runs along the north shore of Lake Superior, on the way from Sault Saint Marie to Wawa.  When snowflakes started to hurtle toward my windshield, I turned around and headed south.  Two days later at the McMichael Collection in Kleinberg (north of Toronto) I saw A.Y. Jackson's First Snow At Algoma  and thought "I have been there, too." 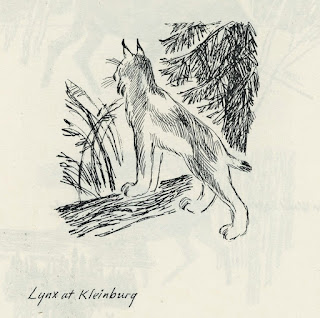 The McMichael centers on paintings by Jackson and the other members of The Group Of Seven, Canadian landscape painters active during the period between the two World Wars who are, lamentably, little known in the U.S.  Also works by Thoreau MacDonald (1901-1989), the son of Group of Seven member J.E.H. MacDonald.  Thoreau MacDonald was an artist and illustrator who preferred to work in black and white, as he was colorblind.  He was also a walker and, as such, sensitive to his place in a land populated by otters, minks, fixes,  and lynx.  His artistic method was to keep his attention focused on the moment - that thing that is the only thing any us ever has - and to make his art when he was back in his studio.  What was it that held the attention of this handsome lynx? 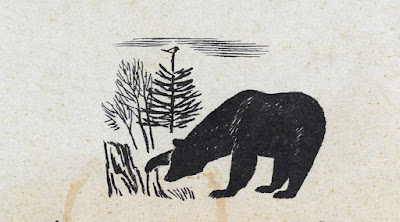