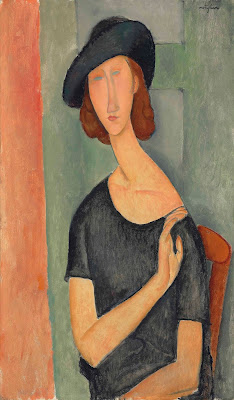 Holophrase...a word phrase that expresses a meaningful thought and here, taken from street signs, is a capsule description of modernism in Paris, circa 1919, beginning with  NORD-SUD, the sign above the  entrance to the Metro, that opened in 1910.  Like the fragmentation and multiple perspectives of a Cubist painting, Hope Mirrlees' Paris: A Poem is a literary vision of the overthrow of narrative in favor of the mythical.  And what better vehicle is there to express the irrational side of a rational  scientific age.


The time is spring of 1919, the place is Paris, the city where peace notations to finalize the end of the Great War are ongoing.  At the same time people are mourning the dead.  Mirrlees alludes to this with "subterranean sleep of five long years"  as the paintings in the Louvre are brought up from their underground storage to be rehung, unlike the dead who will never from their slumbers.

The Louvre is melting into mist
It will soon be transparent
And through it will glimmer the mysterious island
gardens of the Place du Carousel.
The Seine, old egotist, meanders imperturbably to the sea
Ruminating on weeds and rain
If through his sluggish watery sleep come dreams
They are the blue ghosts of kingfishers."

How we take for granted the tropes of modernism, its combination of high and low art forms, the juxtaposition of religion, art, and literature with fragments of advertisements and snippets of overheard conversations, all experienced at warp speed.

Paris: A Poem is also modern in its pan-European reach.  On the first page, Mirrlees uses her knowledge of Greek for "Brekekekek coax coax" to imitate the noise made by frogs in the Aristophanes play of the same name.

The poem takes the form of a journey around the city of Paris.  Just as the Metro began in Montmartre and proceeded to Monparnasse, it traced the route taken by artist and writers in their ascendance from bohemian quarters to the Left Bank.  Mirrlees drew on Baudelaire's persona of the flaneur, the wanderer in the city, but for her it was the Metro that was the vehicle.  She shared with Aristophanes a fascination with the underworld ("we are passing under the Seine"), a journey into the modern underworld made possible by engineering.

Hope Mirrlees (1887-1978) was born in Kent, hear London, and grew up there and in Scotland and South Africa.  She studied at the Royal Academy of Dramatic Arts and then studied Greek at Cambridge University where her tutor was the prolific classicist Jane Ellen Harrison (Prolegomena to the Study of Greek Religion), one of the founders of the modern study of ancient Greece.  The two women formed a lifelong bond, dividing their time between the United Kingdom and France.

Published in 1920 as a chapbook limited edition of 175 copies  by Leonard and Virginia Woolf at their Hogarth Press, Paros: A Poem was never reprinted.  Three years later the Hogarth Press also published the first edition of T.S. Eliot's The Waste Land.  Both poems use unconventional typography and prominently feature rivers, the Seine in Mirrlees, the Thames on Eliot, but Mirrlees came first.

As significant as Paris; A Poem was in the development of literary modernism, it has lacked champions, Julia Briggs being the most vocal in calling attention to "modernism's lost masterpiece, a work of extraordinary energy and intensity, scope and ambition,  written in a confidently experimental and avant-garde voice."

In its afterlife, Mirrlees' poem went underground.  When Mirrlees converted to Roman Catholicism after Harrison's death, she refused to allow it to be reprinted; she now considered it to include blasphemies.  In 1973, Mirrlees edited it for republication but the journal she was working with folded before the poem appeared.

Excellent, many thanks
Stephen

Welcome, Stepehn. SO glad you liked this. I was so impressed by Hope Mirrlees and wished I had known her work sooner.