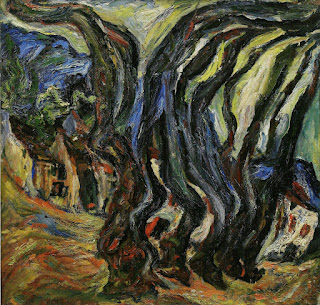 "I could see them plainly, but my mind felt that they were concealing something....and yet all three of them, as the carriage moved on, I could see them coming toward me....Like ghosts they seemed to be appealing to me to brin them back to life....I watched the trees gradually recede, waving their desperate arms, seeming to say to me: "What you fail to learn from us today, you will never know. If you allow us to drop back into the hollow of this road from which we sought to rais ourselves up to you, a whole part of yourself  that we were bringing to you will vanish forever into thin air." I was as wretched as if I had lost a friend, had died to myself, had broken faith with the dead, or repudiated a god." - Marcel Proust, from In Search of Lost Time, translated from the French by G.K. Scott Moncrieff & Terence Kilmartin

When John Ruskin coined the term "pathetic fallacy" in Modern Painters he intended no compliment, describing the state of mind that gave rise to human personification of nature as "unhinged by grief."   Yet the belief that things are mirrors of our inner lives is seductive and resonant. As Marcel Proust wove a spell around readers with his....of an encounter with three trees, so does Chaim Soutine mesmerize viewers with the painting Big Blue Trees. It is, of course, the artist who is communicating a message; his colors bursting from his brush with elemental force, distorted, exaggerated, expressionistic. Even in reproduction, we sense the viscosity of paint applied to canvas.  The agitated canvases of Soutine owe something to the black paintings of Goya. Soutine developed a recognizably personal style early on.

"Soutine painted rapidly...He painted passionately, with fervor, in a trance, sometimes to the music of some Bach fugue that he played on a phonograph." - Chana Orloff, like Soutine an emigre to Paris and, also like him, she became friends with Modigliani who, in turn, introduced her to Soutine.

The tenth of eleven children Chaim Soutine (1893-1943) was born in a shtetl in Minsk. His tyrannical father often beat the children for any reason or no reason at all and his wrath fell most harshly on young Chaim.  But the boy did not have a submissive personality which only enraged his father more.
And, feeling unsafe at home, Chaim sought solace in nature.

Thanks to the intercession of some kind neighbors, Soutine was able to study art for three years in Vilnius.  From there he, and two fellow students, emigrate to Paris where they found refuge at La Ruche (The Hive), a residence for struggling artists in Montmarte.  There he met Amedeo Modigliani, who was enchanted by the shy but determiner painter.   The two became inseparable, spiritual brothers.  Modigliani would paint Soutine's portraits several times, most notoriously on the door of the apartment of their dealer, Leopold Zborowoski, the man who introduced Soutine to the magical landscape of Nice.

Another dealer, Paul Guillaume took up Soutine's cause, showing hs work to the wealthy American collector Albert C. Barnes who was so impressed that he bought the contents of the artist's studio on sight. After years of poverty, Soutine was giddy: he ran out into the street where he hailed a taxi and ordered the dirver to take him to Nice, four hundred miles from Paris.  Soutine's sojourns in Nice, so different from his native land, colorful and prosperous, greatly influenced his painting, freein him from a drab palette, much as it had done for Vincent van Gogh before him. Vital and full of energy, Soutine's radical style would him an enthusiastic audience.

Thank you!!! I can recognise every Soutine painting very quickly, even those we aren't really familiar with. His paintings are sometimes difficult to look at, but at least in Paris the impoverished foreign artist found food, a clean bed and friendship at La Ruche.

Bless the heart of Amedeo Modigliani who came from a successful family in Italy and took it upon himself to teach Soutine how to eat nicely and dress nicely. And bless Leopold Zborowoski as well.

Soutine died a hideous death during the Holocaust but at least his legacy survived in Albert Barnes' collections.

Hels, you're right about how recognizable Soutine's style was, and right from his early days. His work is all expression, leaving the viewer to seek out the representative and ponder what the expressiveness means. Soutine can make us think about the "pathetic fallacy" because his paintings question it.