The Heart of the Matter: Otis Kaye 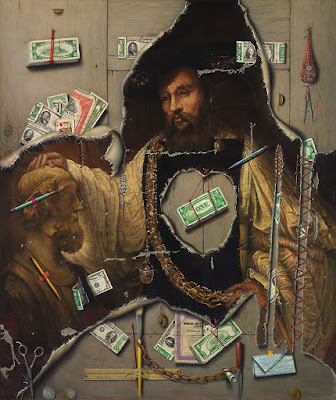 3.
"Every day I go to earn my bread
In the exchange where lies are marketed,
Hoping my own lies will attract a bid.

4.
It's Hell, It's Heaven: the amount you earn
Determines whether you play the harp or burn."

- from Hollywood Elegies by Bertold Brecht,
translated by Adam Kirsch in Poetry Magazine, 2011.


A man with a hole in his chest where his heart should be, instead there is a package of dollar bills wrapped as if by a bank clerk. Heart of the Matter is typical of Otis Kaye's favorite painting genre - the money painting. Selling paintings of currency has been illegal since 1909  so Kaye had to give them away. Nevertheless, he was often in trouble with the Bureau of the Treasury; Kaye thought that painting currency no longer in circulation would pass muster but the government begged to differ.

Kaye's obsession with money is muddied by his idiosyncratic relationship with truth. We know that when the stock market crashed in October 1929, his finances suffered a severe shock and so did his nervous system. The irrationality of the stock market induced in Kaye a grim kind of gallows humor. His works abound with calligrams, rebuses, and visual puns but its closest ancestor is vanitas,  paintings of the transience and futility of life, popular in the 16th and 17th centuires. His engineer's eye was trained for precision; the stock ticker tapes and graphs that appear in his paintings are clearly legible and always headed in one direction - down.

Otis Kaye (1885-1974) was born in Dresden, Germany.  After emigrating to the U.S., his father, who owned a lumber yard died in 1904; with his mother, Frieda Millabeke, Kaye moved to New York for a short time.  He had studied engineering back in Germany; at first art was merely a pastime but after the stock market crash of 1929, Kaye began to make tromp l'oeil paintings in the style made familiar  by William Harnett and John Frederick Peto.

Money problems put a strain on his marriage; in 1937 his wife moved back to Germany with their two children. He also made etchings in the styles of Rembrandt and Whistler; however he sold only two works during his lifetime and there were no public exhibitions, either. Kaye eventually returned to Dresden in 1966, where he died in 1974.  Only after his death did Kaye's works attract attention and then enter public collections.

Otis Kaye would be better known today if, he had been the subject of a book by arts journalist Lawrence Weschler.  In 1999 Weschler published Boggs; A Comedy of Values about the career of  J.S.G. Boggs who, like Kaye, drew pictures of money that he used as performance art pieces.  Again, like Kaye, Boggs was the subject of prosecutions - on three continents. The authorities were not amused.

Money painting, a painting genre! and even prohibited!! Very surprising!!!

Tania, Boggs used his performance pieces to make money for himself. Yes, it is illegal to make your own money and then use it as legal tender. That amounts to counterfeiting.
Otis Kaye tried to follow the law but; Boggs flouted it.

Thanks, I see now.