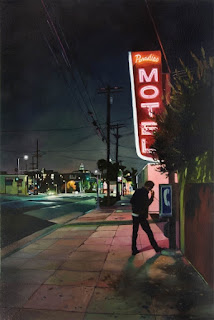 The light in southern California - whether direct, diffused, ambient, incandescent, or fluorescent - is different than the light I grew up with in the east. We associate California with intense sunlight and also the artificiality of Hollywood klieg lights so it is not surprising that Patricia Chidlaw's work is replete with flourishes of light, either dramatic (as in Paradise Motel) or subtle (as in Saffron's World). The southern California light seems to vaporize human artifacts as soon as they are built. As an aside, I wonder, does Chidlaw paint with oil rather than acrylic because of the latter's tendency to fade in the light.

Chidlaw is a painterly realist with an urban sensibility,  shaped by the automobile. Her palette contains a symphony of blues that reach from aquamarine to lavender-blue.  Her frequent use of oblique angles and their frontal placement give an automotive  sense of movement to her pictures.


This is a place that erases visual history with glee.  Did the fires and earthquakes give white settlers the idea or did they come  with erasure in mind?  Chidlaw's precisely located paintings are a historian's gold mine of post-war architecture, so the paintings of Nell Brooker Mayhew (1875-1940) captured the Spanish missionary style. 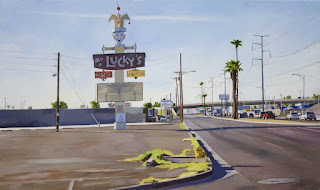 Occasionally a person or a goldfish will appear in a Chidlaw painting but  the unpeopled rooms and streets are saturated with lost dreams. Is the name Paradise Motel  a brave front presented to a jaded world? Mr. Lucky doesn't look as though it has enjoyed good fortune for a long time. To meditate on the foolishness of building a water park in the desert, abandoned now and vandalized, where even the palm trees have been shorn of their glamour is to reckon with how transitory our dreams really are. But if that makes Chidlaw's work sound depressing,in fact  it is something more.  And identifying that something more is why the poets who contributed to Elsewhere, Paradise are so inventive. 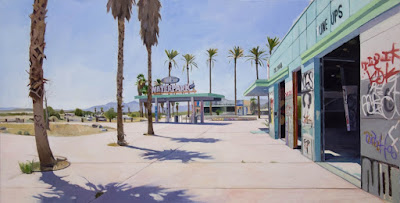 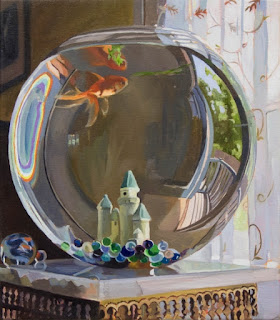 Saffron's World is something altogether different, like one of my other favorite Chidlaw paintings Air Dancer (the dancer of the title is a trapeze artist).   "The Story of My Golden Life," a poem by Pamela Davis imagines the quirky interior monologue of Saffron, the goldfish, who confides flirtatiously,  "I try to lift a fin to wave my prettiest when he walks/ through the door."

"Everything went so fast. Once I was going nowhere
in a dime store aquarium of a dozen common fish
and he chose me  - lifted in a metal scoop, held high
plopped in a bag of water shut with a quick twist."

Here at last that elusive paradise is getting closer.

Hyperrealistic painting is not my favorite, but these works open on a universe in an expressive way despite everything.

Tania, I'm happy that you like this work. I described Chidlaw as a "painterly realist" because she does not try to imitate photography.